Travel through Grecian history with this year’s Cabaret production 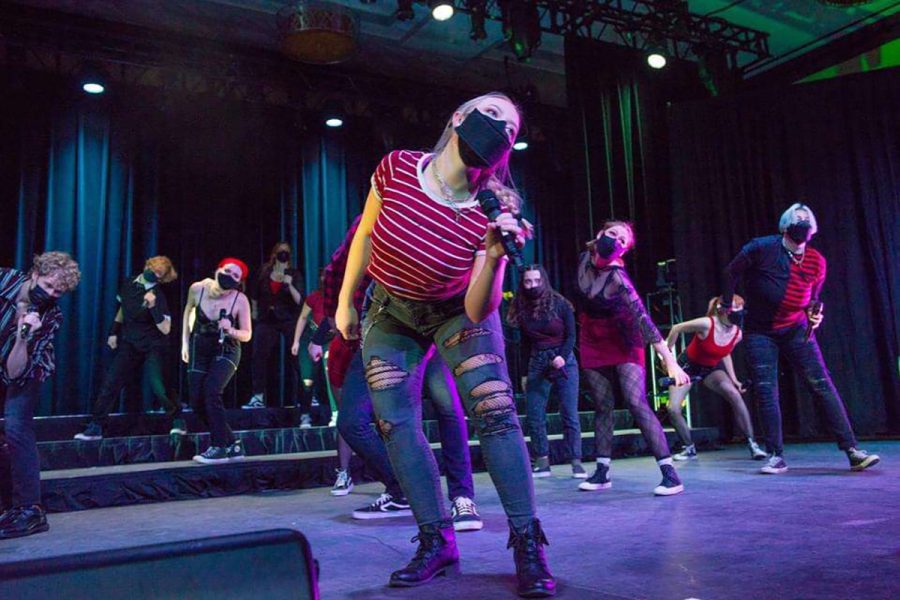 The energy and magic of “Cabaret” returned to the UW-Eau Claire campus these past two weeks, and featured the school’s choral, orchestral and jazz ensembles. Performers described their experiences this year, and how COVID-19 impacted the usual flow of the production.

Consisting of two acts, “Cabaret: ‘Olympia’”, explored different facets of Greek mythology, gods and goddesses. Popular songs were featured in each section, and centered around the theme of the specific mythology, such as Chaos, Dionysus, Artemis and Apollo, to name a few selections. The story unfolded on stage with a group of friends stuck in a museum, exploring Greek god and goddess exhibits.

Daniel Torrez, a third-year music education student, went into detail on the production: “Throughout their journey, they learn to believe in themselves in certain pieces,” Torrez said.

“Cabaret: ‘Olympia’’ was put on pause in early 2020 due to the COVID-19 pandemic, and after over a year and a half off stage, Torrez said their return to the spotlight as, “exciting and heartwarming.”

Torrez said he was a singer and dancer for the tenor/bass sets for the Ares and Aphrodite selections of the program.

Other performers shared similar feelings of joy when given the chance to perform again. Emmeline Liske, a third-year music education student, Cabaret vocal arranger and co-worker on the Hades set, said being on stage again for the first time since freshman year is exciting.

“It’s definitely great to reconnect with people that we didn’t get to perform with last year, and to have everyone back together is really exciting,” Liske said.

In addition to Liske’s antidote, McKinley Uelmen, a third-year music education student and choreographer for the Hades set, said he was ecstatic to get back on stage with everyone, especially for this student-led and student-run event.

“Emmeline and I had been working on our set for about two years now, so this Cabaret is actually two years in the making,” Uelman said. “For people to finally see it is really exciting, as we were supposed to be performing this during our canceled Cabaret year.”

In that same light, Haley Henke, a fourth-year communications and music student, said her time off from “Cabaret” was challenging, but being back and doing rehearsals is rewarding.

All performers mentioned that the feeling of Cabaret was still there, even with Centers of Disease Control and Prevention guidelines to accommodate the COVID-19 pandemic.

“[Cabaret] made me realize that I could be a leader for others and myself,” Torrez said. “I realized that I could let go, and just enjoy the moment. I know that I have a family and a community behind me when I need it.”