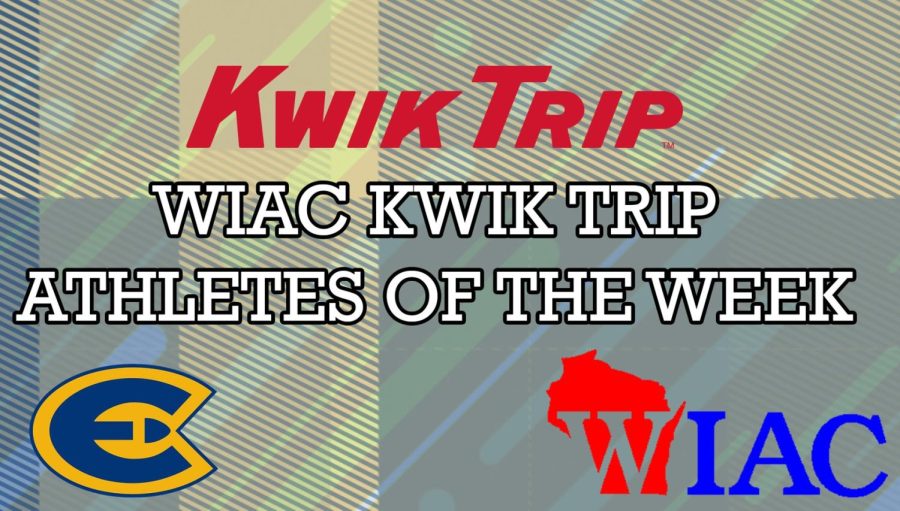 Sarah Dahlk, Marcus Weaver and Stephanie Martin were all named Kwik Trip Athlete of the Week for the week of Jan. 20 to Jan. 30.

Three Blugold athletes opened up the start of the spring semester with the Wisconsin Intercollegiate Athletic Conference Kwik Trip Athletes of the Week award for the week of Jan. 20.

The first of the athletes, Sarah Dahlk, is a member of the UW-Eau Claire swim and dive team. Dahlk, a fourth-year diver, broke a school record that had remained unchallenged for 27 years in a dual meet against UW-Whitewater on Jan. 29.

“I’m kind of in shock, like it doesn’t feel like it happened,” Dahlk said, referring to setting a new record. “At the meet I was just really confused because I didn’t even know I was close to it.”

Dahlk achieved National Collegiate Athletic Association zone cuts on both the one-meter and three-meter boards. Her dive on the three-meter plank broke the school record with a score of 307.4.

Dahlk said she started diving when she was 5 years old. She competed on her high school team and joined the UW-Eau Claire team four years ago.

Going forward, Dahlk said she is hoping to make it to nationals in Indianapolis this year.

“I want to work on my entries for my dives, make them cleaner,” Dahlk said. “But I just want to  have fun, I don’t want to take it too seriously.”

Marcus Weaver, a third-year multi-event athlete on the men’s track and field team, was also named Kwik Trip Athlete of the week. According to Blugolds.com, Weaver set the NCAA DIII heptathlon record at the Warren Bowlus Open on Jan. 28 and Jan. 29.

Weaver is now considered no. 1 in WIAC and in the nation. He was unavailable for comment.

Stephanie Martin, a fourth-year goalie for the UW-Eau Claire women’s hockey team, was the last athlete named Kwik Trip Athlete of the week. Martin said despite the worries with COVID-19, she is happy with how the season is going so far.

“It’s really awesome, my team has been working really hard and it’s just nice to see us getting rewarded for it,” Martin said.

This is her second season with the UW-Eau Claire women’s hockey team. Prior to UW-Eau Claire, Martin said she had been playing hockey since she was 11 years old. She went to a prep school in Canada, the Ontario Hockey Academy, before playing for Elmira College for two seasons.

Martin said her personal goal right now is to work on her mental focus while in the goal zone.

“My team can be really good offensively, so sometimes in a period I won’t get a lot of shots so just being ready for any weird bounces that might come my way is important,” Martin said.

The women’s hockey team’s biggest rival right now is the UW-River Falls team, Martin said. The team played them once — a 2-0 win for UW-Eau Claire — but Martin said they will play them twice next year, which will really determine who wins the conference championship.

Women’s hockey has a game tonight, Feb. 9 at the Hobbs Ice Arena as well as three games this weekend against Northland and UW-Superior. More information can be found here.

Men’s track and field has an invite this weekend at UW-Stout and women’s swim and dive will not be competing until the start of the WIAC championships starting on Feb. 16.