Dr. Pha works on new exhibit about the Hmong people

Dr. Pha works on an important exhibit that will chronicle Hmong resettlement in Wisconsin 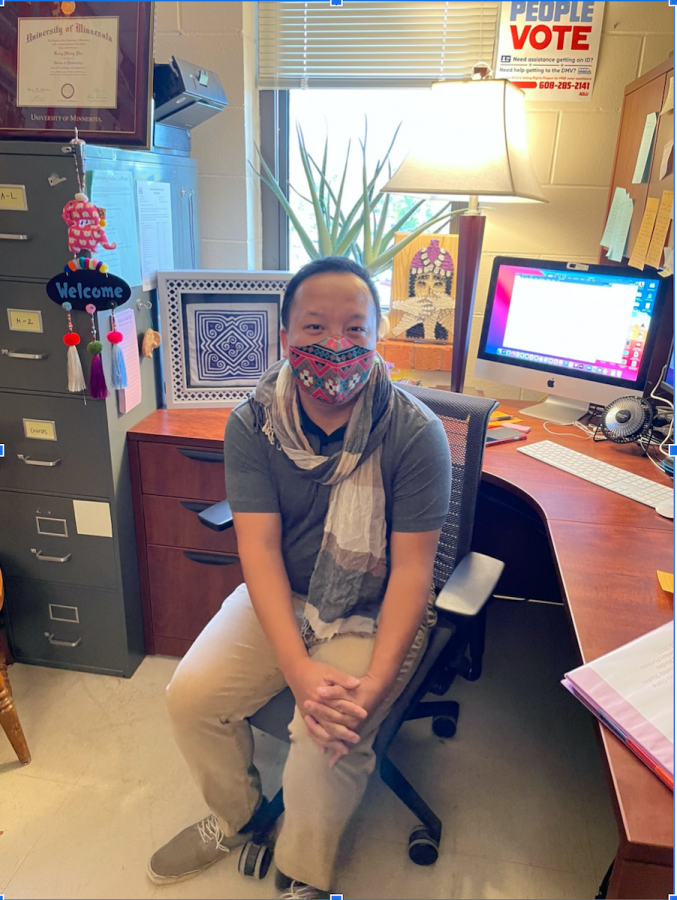 Dr. Kong Pheng Pha, associate professor at UW-Eau Claire and co-project director of the “Cia Siab in Wisconsin” exhibit, in his office.

“I believe cia siab means depending, trusting and having faith in what will and could happen,” said Sandie Thoj, a member of the team developing “Ciab Siab in Wisconsin.”

Fully titled, “Ciab Siab (Hope) in Wisconsin: A Hmoob (Hmong) Story,” the project is an exhibit that will chronicle the experiences of the Hmong and Hmoob refugees who have resettled in Wisconsin following the Vietnam War, America’s Secret War in Laos and life in a state of perpetual warfare.

Dr. Kong Pheng Pha, an associate professor of women’s, gender and sexuality studies at UW-Eau Claire, is one of the founding team members of the exhibit.

“I’m the co-project director, along with my colleague, Dr. Mai See Thao,” Pha said. “We were both involved from the very beginning, which was actually many years ago in 2018.”

Pha’s connection to the exhibit is deeply personal. He explained his family were part of the Hmong refugees who resettled in Wisconsin in the early 1990s.

“It’s really fundamental to me as a Hmong person who grew up in Wisconsin,” Pha said. “Because I’m also a scholar who researches and teaches about Hmong people, this really means a lot because I can show Hmong stories to a larger public beyond my classroom and the things that I write.”

“Ciab Siab in Wisconsin” will be a traveling exhibit which will stop in cities around Wisconsin with the highest Hmoob populations; Eau Claire, Fox Valley, Madison, Milwaukee, La Crosse and Wausau.

For Pha, one aspect of such a state-wide project is the opportunities to work with a wide variety of ambitious people.

“It really requires collaboration between all kinds of people from across the state,” Pha said. “We are very intentional about it being a community based project, and that has been super fun.”

Pha said that a project with such a wide scope did have its challenges too, but he believes the benefits of a surplus of ideas outweigh any downsides.

“There’s so many ideas that I feel like I would not have just by speaking to academics alone,” Pha said. “We’re working with all kinds of people who have different specialities, and it’s been great putting all our ideas together to make this project work.”

Pha said all this work and collaboration has come together to build something that tells a very powerful story.

“We’re really exploring big questions,” Pha said. “It’s not just for Hmong people. We’re exploring fundamental questions about what it means to be human. How do you deal with adversity, like racism, and what can we all do to improve these issues?”

Pha said the important topics the exhibit covers include asking what it means to perpetually live in a time of warfare and how one heals froms a trauma like that.

The exhibit will be interactive, featuring various artifacts and sensory aspects like smell, and, according to Pha, this all works to express the humanity of the exhibit’s story to its audience.

Last spring, the team behind the project held a “pilot” exhibit in Oshkosh last spring. Pha explained they used the trial exhibit to test out different aspects of the exhibit, despite being hindered by Covid-19. For the team, Pha said he thought the exhibit was a good milestone.

“Getting the (National Endowment for the Humanities) grant was also a major milestone for us,” Pha said. “Another big step that is coming is to host community workshops in the spring or maybe summer of 2022 and get feedback from community members on what we’ve done so far.”

The exhibit is slated to be released to the public in 2025. In total, Pha will have worked on making this project a reality for nearly a full decade.

According to Pha, all this work is worth it to tell these stories and create a new discussion about the topics that the exhibit covers, both on a large-scale level and among the students of Eau Claire.

“It’s also an opportunity for students to be engaged in some of the questions we’re asking and to get involved on campus,” Pha said. “I really hope they will see all of these themes in the exhibit and connect them to their studies and the conversations we’re having on campus.”

At its core, Pha expressed the most important part of the exhibit is telling stories many have heard misrepresented or not at all.

“I’m just excited to share these stories with people,” Pha said. “At the end of the day it is really about learning from each other’s experiences. I’m really, really excited about that.”