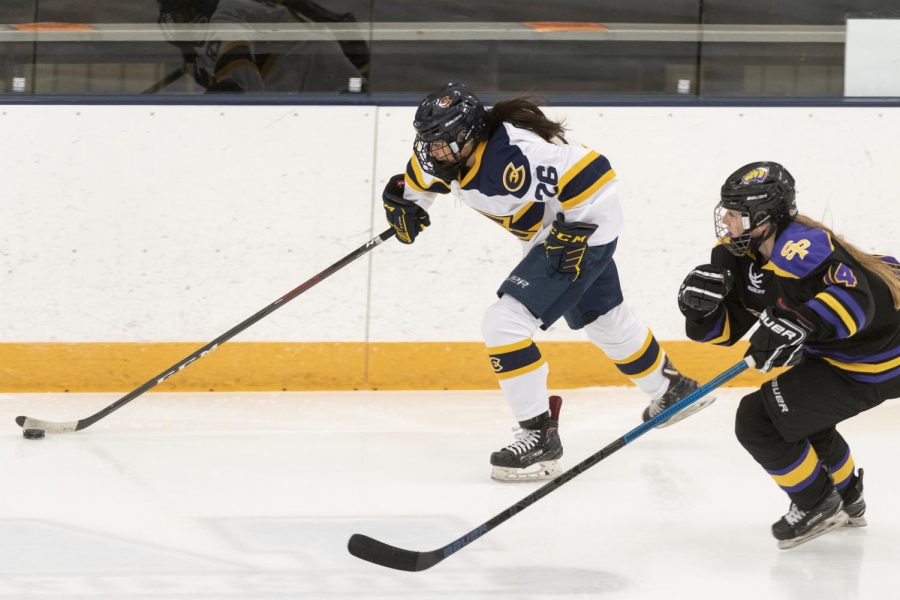 The UW-Eau Claire women’s hockey team faced UW-Stevens Point for their first two games of the season last week, earning their first win in the second matchup after a tie in the season opener.

UW-Eau Claire hosted the Pointers at Hobbs Ice Arena on Feb. 3 for the opening matchup. The game ended in a 2-2 tie after the Blugolds overcame a 2-0 deficit to send the game into overtime.

After UW-Eau Claire fell behind, Ella Ierino, a third-year forward, scored the Blugolds’ first goal of the season with less than three minutes to go in the second period to cut the deficit in half.

Midway through the third period, Samantha Scherling, a second-year forward, scored a goal to tie the game at 2-2.

The game ended in a tie as neither team was able to score in the five-minute overtime period.

Stephanie Martin, a third-year goalie, stopped 16-18 shots on goal in her first career start for the Blugolds.

Despite the game ending in a tie, the Blugolds had a large lead of 36-18 in shots on goal in this matchup.

In the second game, the Blugolds travelled to UW-Stevens Point and earned their first win of the season in a 2-0 shutout Feb. 5.

“The group as a whole was so much more accurate with how they played on Friday’s game,” Strand said.

After both teams were held scoreless in the first two periods, Emma Peterson, a fourth-year forward, got the Blugolds on the board in the third period with her first goal of the season.

Peterson redirected the puck into the goal off a faceoff in the offensive zone and a shot from the point.

Just a few minutes later, Ierino scored her second goal of the week to put the Blugolds ahead 2-0, and the Blugolds ended their first win of the season with a shutout.

Strand said both goalies made some great saves in this game to keep the matchup close.

Scherling agreed with her coach that her team showed improvement in Friday’s game from Wednesday’s opener.

“It was nice to be able to have that time to learn from the first game and take it into the second game. I think that really helped us,” Scherling said.

Strand said this was a particularly strong showing from his team considering how difficult it is historically to get a win at Stevens Point.

“That was the first time I felt like we had a full 60-minutes of good Blugold hockey in that building,” Strand said.

Scherling said despite the NCAA’s ruling to cancel Division III winter national championships for the 2020-21 academic year, her team is still embracing the chance to compete for a conference championship.

“Playing your whole life, training to go play college hockey, you are really grateful for anything you can get,” Scherling said.

The Blugolds return to action on Feb. 17 and 19 when they will play two games against Northland College.

Northland College lost their first two games of the regular season last week to UW-River Falls, falling 13-0 in both matchups.

Strand said despite Northland College’s performance in their first two games, the Blugolds will need to take them seriously in their preparation.

”Believe me, we’re not going to take them for granted because that’s usually how the mighty fall,” Strand said.