Junkin all the way offers vintage wares for the holidays

Antiques, junkers and more to enjoy the festivities of the holidays 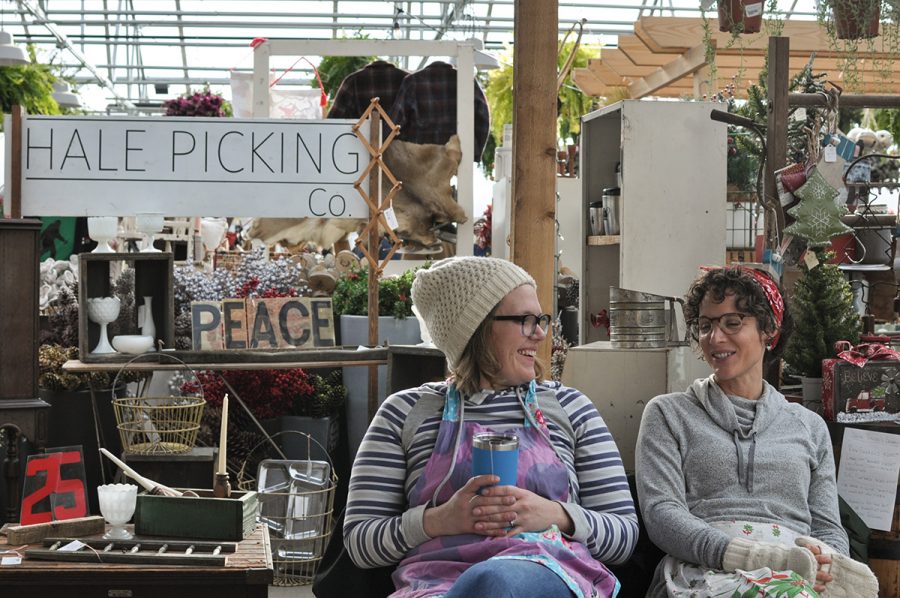 Vendors and customers filled The Down to Earth Garden Center to celebrate the beginning of the holiday season.

The smell of dust, plants and dirt permeated the space. Overhead, Christmas music played from speakers.

“It gives the community a unique event for the holidays,” Ben Polzin, the center’s owner, said.

The event was put on at the garden center with permission and help from Polzin.

There, vendors sold their wares of antiques — refurbished and in original condition. Vendors had booths both inside and outside the shop, mixed in among the plants.

A part of this crowd was Kathy Clausen, a first-year vendor at the event with her husband. They were selling vintage goods, antiques, collectables and a little bit of everything, Clausen said.

Clausen and her husband have been visitors of antique fairs and junks sales for fifty years, Clausen said.

Clausen and her husband have been married for fifty years and have been avid collectors throughout that time, Clausen said. They would go from junk sale to junk sale finding collectibles and antiques to add to their collections.

It was something the couple liked to do, Clausen said. With her husband being a retired salvage yard employee, she said it comes naturally.

There was a lot of planning that went into the event, Polzin said, from deciding which vendors made the cut, to sectioning off the store to make room for them. Many vendors did not make the cut.

While the event was put on this year by Down To Earth Garden Center, it was originally held at The Lismore Hotel in downtown Eau Claire where it was held for the 13 years prior, according to the Leader Telegram.

According to Volume One, the event is “a regional holiday event for antiquers, junkers and flea markets lovers… (with) unique, handmade, salvaged and repurposed goods.”

Both vendors and customers seemed happy with the venue, according to Diane White, owner of one of the stalls inside the greenhouse.

White has been selling at events like Junkin’ All The Way all her life, White said.

Her stall was full of antique books, older working utensils, and a variety of other objects including a typewriter, several toy guns and an old antique camera.

“I love junking,” White said. “It’’s nice being inside, and you don’t have to worry about getting snowed on.”

White is a graduate of UW-Marshfield County with an associates art degree. She often sells her antiques under the name “Zen Cat” at The Attic Consignment store on Fairfax street in Eau Claire.

Down To Earth Garden Center has several other events coming up to prepare for the holiday seasons.

Jacobson can be reached at [email protected].