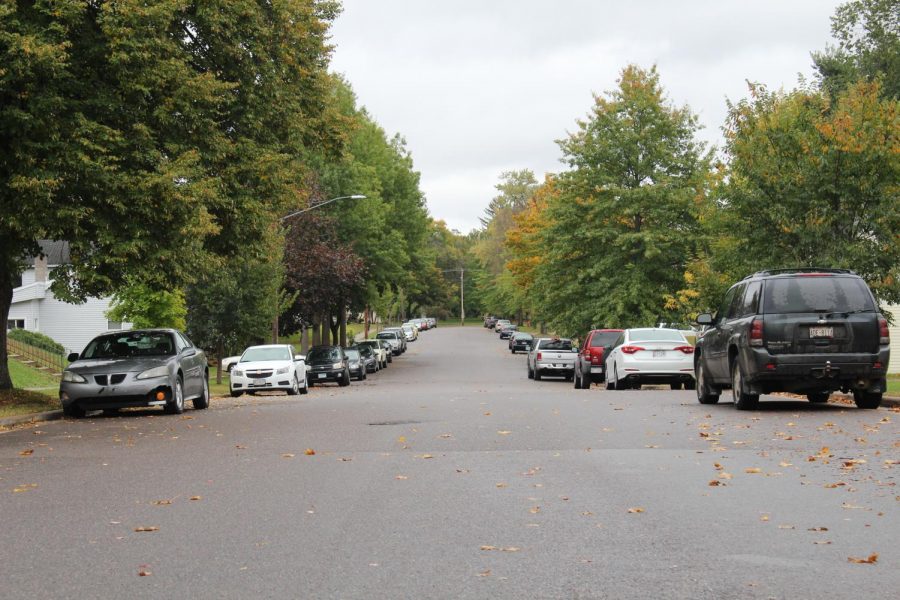 Cars will not be able to park this way overnight much longer with the new law going into effect Nov. 1.

“I’m thinking it is worse, since there will be more restrictions on an already very restricted area for student and community parking,” Jessica Rusciano, third-year nursing student, said

A new street parking law is going into effect on Nov. 1. As police begin to enforce the law next month, students in non-compliance will face penalties.

The law states that from Nov. 1 through May 1, all cars parked on the street must be parked on the correct side of the road from 12 a.m. to 7 a.m. each day, and any cars that are parked incorrectly will be ticketed with a $30 fine, Andrew Werthmann, an Eau Claire City Council member, said.

However, Werthmann said there is a caveat.

The City Services department can postpone when this goes into effect — for example, if there is no snow on the ground — and the same can be said about ending the effects early if there is an early spring, Werthmann said.

For those who have been around longer than others, this law is not completely unfamiliar. The same law used to be in place in years prior to 2015. It was reverted back this year because the old law, which only required cars to be moved during a “snow event,” left many in non-compliance and prevented snow plows from getting through, said Werthmann.

“It’s pretty inconvenient to have to move your car everyday, especially since you know not everyone will comply or remember to move them,” said Izzy Clark, a second-year elementary education student.

As the law has been changed twice in just the past five years, the city is trying to find a policy that works both in favor of the city workers and the people of Eau Claire, Werthmann said. However, he opposes this law, as he was the only one to vote against it in an 8-1 vote.

Werthmann’s main opposition is that it unfairly targets the people who can’t afford it, specifically UW-Eau Claire students. Roughly $8,000 in tickets were written out in 2015, the last time this law was in place, which amassed to $240,000 in fines, said Werthmann. He also predicts that with the law coming back, these numbers will rise.

While he now has personal parking, a student like Ben Peterson, a fifth-year kinesiology student, could see his five parking tickets he received with the old law increase by one or more this coming winter with the new law.

Werthmann said that many people complained about how they were ticketed with their car on the wrong side of the street even though there was no snow on the ground.

“If you get four or five of them across a year, that really changes your budget,” Werthmann said.

Fortunately for students, police will be spending most of November giving out warnings instead of tickets.

“I do respect the goal of the council,” Werthmann said.

As winter approaches and Nov. 1 edges closer, students will need to prepare. Even Rusciano and Peterson were unawre of the impending changes.