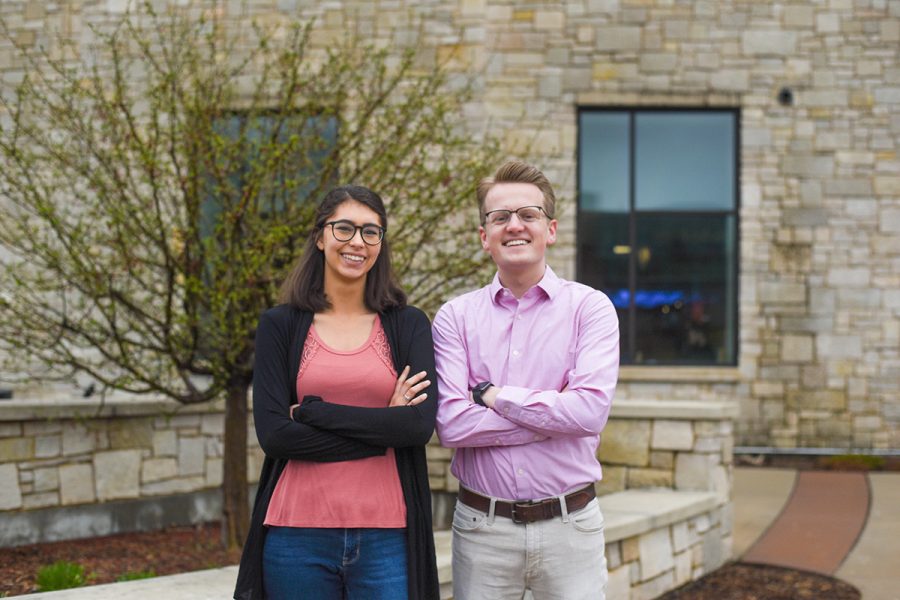 At the Rally for Excellence in Madison on March 7, Charlie Johnson approached Anna Ziebell about running for the positions of Student Body President and Vice President together.

This was 16 days before UW-Eau Claire’s spring break officially started and some time after Ziebell had initially approached Johnson about the matter at the beginning of the semester, she said.

“I didn’t necessarily say no (when Ziebell first asked), I mean, I did say no,” Johnson said, laughing at the confession. “I had other plans for next year. It was always in the back of my mind … and it just clicked with me again (at the Rally for Excellence). It was something I knew I wanted to do.”

Ziebell said she knew Johnson had been contemplating the decision to run for awhile, but was just hesitant to commit to it at first.

“The more you think about it, the more you realize that if you keep waiting until you’re ready, you’ll never be ready, so we just kind of jumped head first in together,” Ziebell said.

Within the time between that March 7 day and spring break, Johnson said he and Ziebell had discussions about what they would base their campaign around and how they would go about doing that.

Ultimately, Johnson said, having those discussions and planning his and Ziebell’s campaign contributed to a lot of late nights.

“We got a majority of our ticket together within 24 hours, which is kinda remarkable,” Johnson said.

The quick turnaround, Ziebell said, was a challenge in their journey toward becoming Student Body President and Vice President. However, she said all of the excitement they felt when they discovered they had won assured them that their hard work had paid off.

Their goals, Johnson and Ziebell said, may not have always been to hold these titles, but their passion behind these roles have been present for a long time.

Johnson, a third-year political science student, has not always had that major, but something about the field continuously drew him back to it, he said.

“From my senior year of high school, I knew that politics and the general workings behind it was what I was interested in,” Johnson said. “I never necessarily had any plans to go into politics when I was in college.”

The “strategic play” is what Johnson said he has always admired about politics, in the sense of navigating the best way to work with others and creating successful relationships.

Johnson also said that he feels being involved in politics “is the best way to get things changed.”

Both Johnson and Ziebell said they had gotten involved in Student Senate as first-year students at UW-Eau Claire.

His suggestion, she said, was to join Student Senate.

In her first semester of college, Ziebell said she sat on the Intergovernmental Affairs Commission. By the next semester, she was running for a senate seat.

“I ran independently my freshman year,” Ziebell said. “I didn’t run on a ticket, and I was actually voted in for the 62nd session. It’s been a journey and a lot of it was by myself until recently.”

Johnson said his involvement with student government began at his first-year orientation at UW-Eau Claire.

“Student Senate had a table outside and I happened to see the IGA Commision on their sheet of paper,” Johnson said. “I liked what it was about, so I applied to be on the Commision the first couple days I was here.”

From there, Johnson said former Student Body Vice President Nick Webber reached out to him because Webber was the director of IGA at the time.

“I would definitely call him a mentor,” Johnson said.

Student engagement is something both Johnson and Ziebell said is essential to what they hope to accomplish, as they said attendance has been dropping in terms of students going to events and joining clubs.

“So my general theory is that if you’re a freshman coming in, you need those juniors, seniors and upperclassmen to take you under their wing, like Nick Webber did for me, to show you the ropes, so by the time that you’re a senior, you can do the same for freshman,” Johnson said.

Johnson said he never would have foreseen himself being voted Student Body President, but it was the connections he made as a first-year student that guided him to the desk he sits at now.

Her passion to help others, Ziebell said, is what continually drives her in the positions she has held and the one she now holds. However, she said remaining humble is crucial as well.

“This position seems really glorified from a lot of different perspectives,” Ziebell said. “I want to make sure that my passion to represent students and my passion to help students continues to push me to be the best Vice President that I could possibly be.”

Maddie Forrest, a fourth-year public relations student and the 2018-19 student body vice president, also said the student body is lucky to have Johnson and Ziebell as their leadership.

“We’re sad to be leaving these offices,” Forrest said, “but we’re leaving them in the right hands.”