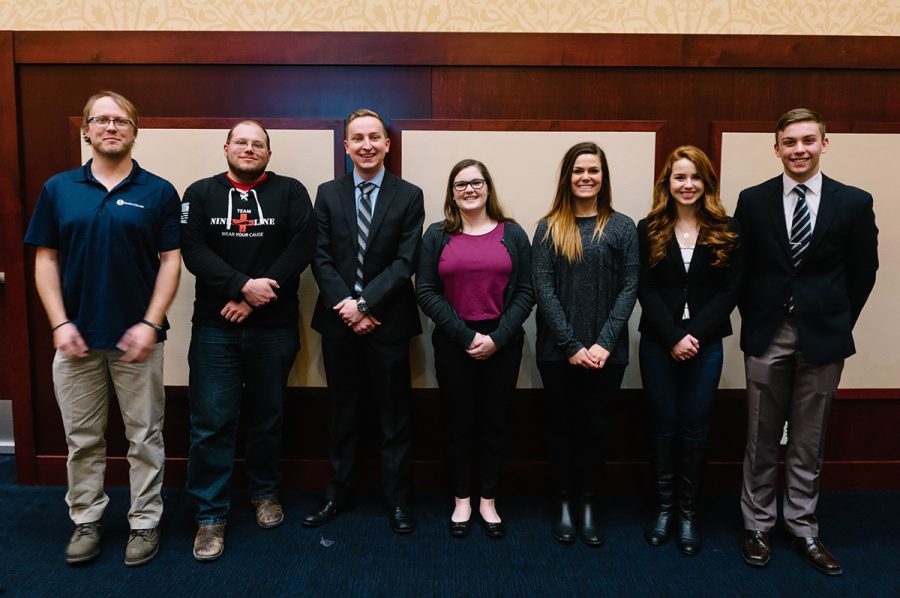 Seven new senators were sworn in at Monday’s meeting, while one more will be chosen next week.

Student Senate passed a bill and a resolution during Monday’s meeting; the latter prompted extended conversation as Senate considered their role in effectively representing and supporting the student body.

The bill was introduced last week by Student Office of Sustainability Director Ethan Fuhrman, and is an early step in revising the campus tobacco policy. A student committee will work on updating the policy so it is in line with current social standards and student needs.

Some members of the body raised concerns the committee would not accurately represent the student body; in response, Fuhrman amended the bill to include three non-Senate committee members. The change was received positively. Campus Affairs Director Lars Nelson said he thought having more perspectives would strengthen the committee and enable them to do great things.

“As a former user and addict of tobacco, I think it’s good to see what we can do to help those that are struggling or in addiction with tobacco to meet their needs as well as to keep our campus body safe and healthy,” Nelson said.

The bill passed with a 23-0-1 vote. The body then proceeded to the resolution, introduced by one of the co-authors of the legislation, Academic Affairs Director Nathan Altmann.

Writing the resolution was prompted by President Trump’s executive order selectively suspending travel and immigration into the United States from certain countries. Altmann referenced a statement made by UW System President Ray Cross, in which Cross noted student anxiety caused by the order and there are about 130 students from these countries currently at UW schools.

The resolution called for support of Deferred Action for Childhood Arrivals (DACA) due to anxiety that DACA may be targeted. It also outlined the importance of UW-Eau Claire students and administration standing with those who are affected by the order.

Much of the body said they backed the resolution, an opinion echoed in the gallery audience of more than 20 people. Normally, about 0-4 people attend Senate meetings.

A Senate representative deferred their speaking term to Lillian Strehlow, who is a member of Peer Diversity Educators (PDE), a student-run organization that facilitates conversations about diversity and social justice issues. Strehlow attended with other members of PDE and said the organization backed the resolution and hoped the university would, too.

“Silence or neutrality on this issue is an action in direct contradiction with the university’s initiatives towards equity, diversity and inclusivity and our core values as a university,” Strehlow said, adding the resolution “is an example for other universities to follow.”

Similar opinions were voiced by Senators. However, some criticisms were raised on the effectiveness and influence of Senate. Senator Branden Yates said while he disagrees with the travel ban, he is also skeptical of the efficacy of Senate through the resolution.

“I am sick and tired of us taking these resolutions thinking we are going to accomplish something through it,” Yates said “yet we don’t walk the walk, we will talk the talk but we won’t reach out to these groups … we continue to sit in here and make these resolution and feel good about ourselves, but we don’t do anything of substance.”

He challenged the body to “step up our game” and said he was uncertain of how he would vote on the resolution because of his doubts on the impact it would carry.

Others challenged his assertions, noting the resolution could serve as a first step to bigger things and that large-scale change starts from the bottom.

Intergovernmental Affairs Director Nick Webber thanked the authors of the resolution, saying it was historic piece of legislation.

“I think that this is an incubator for change,” he said. “I believe at these academic institutions and the decisions we make in this room do have real effects.”

Webber said he thought the resolution carried a positive, non-partisan message that falls in line with the duty of Senate to represent students.

Ultimately, the resolution passed with a vote of 23-0-1 with Senator Ryan Ring abstaining to vote.

Additionally, seven new senators were appointed. There is one more seat open, which will be filled next week.