Not your fifth grade science fair 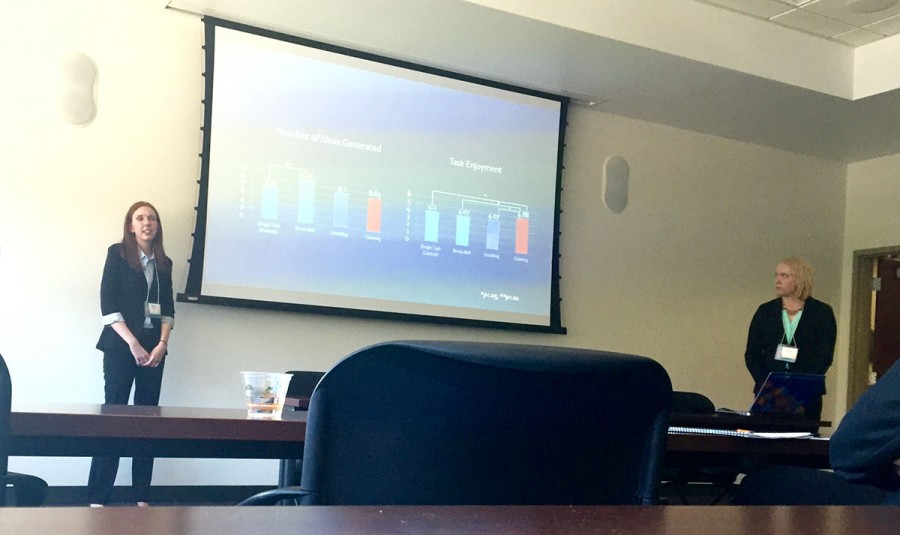 The Sixth annual Provost’s Honors Symposium took over the third floor of the Davies Center with a series of research, scholarly and creative projects during the course of last Friday afternoon.

The symposium is an opportunity for students to present work UW-Eau Claire faculty members nominated to the community and the University Honors Council. There were over 47 projects presented and a total of 101 students involved. The projects spanned 35 disciplines, ranging from photography to chemistry.

Sydney Chinchanachokchai is an assistant professor of marketing and a faculty nominator of four projects that were presented at the symposium.

“This is the best, because they have the chance to talk about their research,” Chinchanachokchai said, “the project they have been doing for a year and then share the experience in an interactive way with their audience, who are interested in their research.”

One of the projects Chinchanachokchai nominated was a research study titled “The Effects of Different Tasks in Multitasking on Idea Generation.” Eau Claire students Sara O’Driscoll and Rebecca Nelson carried out research with the intent of discovering whether multitasking can positively affect creativity.

The results of their study led them to the conclusion that multitasking can help with creativity in some situations. The most effective mode of multitasking was “fiddling” with a stress ball while attempting to generate creative ideas.

Other projects included a study on the effect of music on patients with dementia, and the effect of music therapy programs on their caregivers, titled “Music + Memories = Magic: Wisconsin Community and Nursing Home Projects” and created by Joyce Idarraga, Alissa Peanasky and Allison Sontag.

The students brought the national Music and Memories Program, which is intended to help people with dementia through music, to 150 Wisconsin nursing homes and 25 people with at home.

Overall, the results were somewhat inconclusive, showing that while worker satisfaction decreased slightly in the nursing homes, workers also reported a significant improvement in those with dementia.

All three of the students who carried out this project are graduating seniors, but said they hoped the studies would continue in the future.

Dr. April Bleske-Rechek, a professor of Psychology who nominated three of the projects presented at the symposium, said the experience gained from this event is helpful for students looking to go to graduate school.

“Every group gets a stickler, they get some questions,” Bleske-Rechek said. “This is much more interactive than presenting with posters because students have to interact with people who actually care.”

One of the projects Bleske-Rechek nominated was presented by Carly Murray, Michaela Gunseor, Stephanie Darling and Mark Priebe, titled “Conflations of Correlation with Causation in Researchers’ Descriptions of Their Work.”

The students investigated top tier psychological science poster titles, abstracts and summaries to discover how often causal language was used, finding that over 50 percent of the posters used causal language, while fewer than 50 percent clearly justified this language.

If scientists report correlation as causation, then it confuses the media and the public both.

The group concluded their findings implied confusion on the part of scientists training future scientists.

“If we can’t count on scientists to reliably report their data, then it gets tough for people,” Murray said.

Students presented numerous otehr projects at the symposium, all of them showcasing innovative work done by Eau Claire students.

Dr. Chinchanachokchai said the symposium is good not only for giving students experience presenting research, but for fostering a relationship between students and members of the faculty.

“I would highly encourage more students and faculty members to participate in this event,” Chinchanachokchai said. “This is a great way to showcase your students’ work, and also a great way to make yourself known in the research