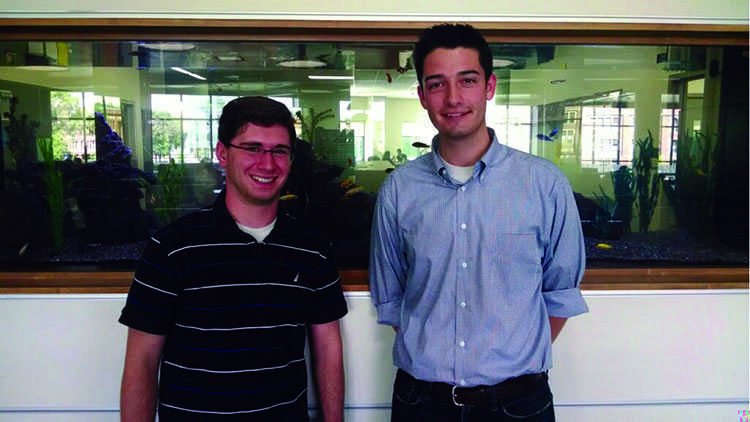 When Sam Fish and Jake Wrasse hang up the suits at night or on a rare off afternoon, they can usually be seen hanging out at each other’s houses, pretty much like any other pair of friends who call UW-Eau Claire home.

One of them likes to listen Fleetwood Mac. The other isn’t afraid to admit he hasn’t gotten out of his teenage angst taste in music, as Fall Out Boy and Panic at the Disco consume his playlist.

And like any good pair of friends, they always have each other’s back, bounce ideas off each other  and combine their interests for the common good.

That signifies the amount of students who call UW-Eau Claire home, and those who voted elected Fish, president, and Wrasse, vice president, to lead the student body for the 2014-2015 school year.

Being the faces of the student body at a 98-year-old institution that has a reputation for being known as a top-five Midwest university is certainly no small task.

However, it is much easier to win together than lose alone, and a strong relationship at the top is the first key to making the institution jump from good to great.

“There’s got to be a solid relationship there if you’ve got to come into a high stress situation and communicate quickly and effectively,” Wrasse said.

A different path, but a common bond

Fish and Wrasse came to UW-Eau Claire for entirely different reasons, and none of them revolved around the option of joining Student Senate.

It was only after his brother, Cory, who was the 2012 Student Body President, told him to come to a Monday meeting with a suit that the younger Fish knew he had joined a family who could help him achieve things he would have never imagined as a current 20-year-old.

Wrasse, who grew up in nearby Durand, came to the university countless times on field trips and competitions throughout his grade school days.

He also was, and still is, incredibly active in forensics. He only applied to one school, the one he and his partner-in-crime currently oversee.

Before long, both were on Student Senate, and both shared the same passion for a university they are trying to set apart from other campuses.

Fish has gone to other universities even around the state where people are amazed at the wide variety of activities, clubs and organizations people can be a part of.

“At Eau Claire, you will be thrown more opportunities than we know what to do with, and it’s incredible,” Fish said.

Wrasse, a communications studies major with a political science minor, said what drew him in was the fact that this university has such as an effort to connect with the community and the feeling of inclusion.

“People here will go out of their way to help you,” he said.

And no matter what that’s what the two of them want for every student who crosses the footbridge or walks down the hill to feel.

It’s no secret that in order to make something better, constant strives for improvement are an absolute necessity.

Fish and Wrasse are no strangers to this mindset, and in fact, they ran last spring on a model of “Committed to Progress.”

They’ve got the right mesh of skills to make leaps forward. Fish studies finance, a bit of a numbers-crunching guru. He is constantly thinking of ways to save students a few bucks.

He’s pursuing a way to let the financial stranglehold of the Blugold Commitment ease a little bit.

He’s looking to change the way he and his staff looks at segregated fees and how those are distributed.

“We want to look at how we become good financial stewards,” he said.

Wrasse is a communicator. Outreach is his forte. He was Intergovernmental Affairs Director for the Senate last year.

He wants the Senate to be involved in community decisions so the student voice, which is a large part of the Eau Claire culture, has a say.

He plans on bumping up the social media usage and putting more of a brand image out there so students across campus know there is a way to give feedback and be involved with important decisions in some way, shape or form.

“We need to make sure outside populations really make sure they know what Student Senate is,” he said. “Our huge goal is making sure we are very intentional with how we communicate with people and letting them know who represents them.”

The university is changing its image. There is a new marketing campaign, the announcement of a new events center, the Confluence Project and many other things.

The two students who represent all other constituents on Wisconsin’s Most Beautiful Campus know this, and it’s a challenge they’re not only willing to embrace, but go beyond.