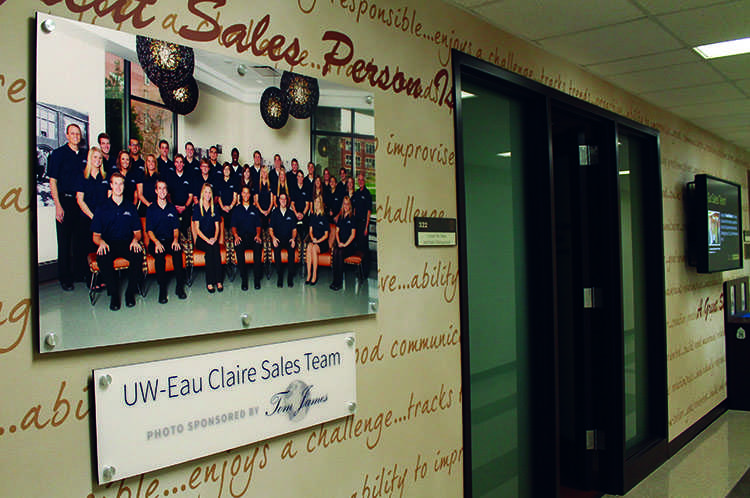 History was made courtesy of UW-Eau Claire’s sales team the weekend of Nov. 8 as the team took home top honors at the Florida State University International Collegiate Sales Competition.
This was Eau Claire’s first time winning a competition they did not play host to, and the field couldn’t have been more impressive. Eau Claire finished atop sales programs such as Baylor (Texas), Ball State (Ind.), Georgia State (Ga.), Illinois State (Ill.), Indiana University (Ind.), Texas State (Texas) and the University of
Central Florida (Fla.).
Faculty coach Jerry Kollross said he was proud of the way his team competed, and this win will do a lot for their program.
“It puts our university on the map nationally with corporations,” Kollross said. “Corporations that normally wouldn’t be trying to hire our sales students will email us now and say they are interested.”
The ICSC also crowns an individual champion along with the best team overall. The individual champion this year was Kelsey Keiser, a senior Eau Claire professional sales marketing major.
“Kelsey had a calmness to her and her professionalism was well above her years,” Kollross said.
For placing first, Keiser won a $2,500 cash reward as well as a $1,000 dress-suit from the event’s sponsor company, Tom James. Keiser said winning is a great feeling, and her team’s hard work paid off.
“For Eau Claire’s sales program to even be competing against some of these very recognizable sales programs is a little intimidating,” Keiser said. “In the end though they are college students just like me.”
The competition used a tournament-style format, which included role-playing scenarios where the competitors first tried to sell Tom James suits to individuals who were trying to better their image.
The teams then had to sell the Tom James line as a whole to business managers who were purchasing the line as an incentive for their employees for their respective companies.
“We have to guess on the objections that are going to come up because handling objections from a customer is sales 101,” Kollross said.
In order to prepare for the possible objections sellers could bring up, the team began preparing four weeks before the competition.
During their preparation, the team first studies the product they are going to be selling as well as the backgrounds of the individuals they will be selling too.
“We prepare for success and the more we prepare the more successful we are,” Kollross said. “I think that is what sets us apart at these competitions.”
Student coach and alternate Arianne Thompson said she enjoyed getting to know her teammates better over the course of the competition, and the fast pace of the competition itself was exciting.
“Becoming the champions at a competition like that shows that our schools sales program really knows what they are doing,” Thompson said.
The sales team is headed in the right direction, with their focus now moving to the National Collegiate Sales Competition. In February, 37 sales team members will compete for two starting and alternate spots.
Kollross said his team’s key to success is the fact they are not intimidated and they now know they belong.
“We have a drive and a work ethic that allows us to out prepare people,” Kollross said. “And it is not a secret that the most prepared people win.”