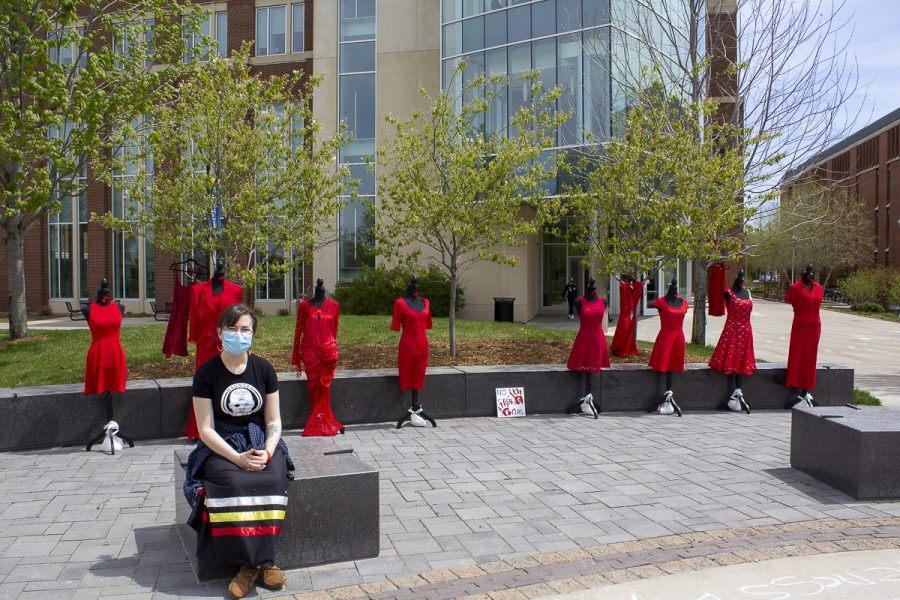 The UW-Eau Claire Inter-Tribal Student Council decided they wanted to acknowledge, remember and raise awareness about the disproportionate rates at which Indigenous women experience violence.

On May 5, the National Day of Awareness for Missing and Murdered Indigenous Women and Girls, ITSC exhibited a red dress display on campus.

“We’re hoping to give people a better scope as to how large this issue is and help it connect on a personal level,”  Caroline Kernan, a fifth-year American Indian Studies student and the President of ITSC, said.

Artist Jaime Black created The REDress Project in 2009 to represent the Indigenous women and girls who have been murdered or disappeared, according to American Indian Magazine.

Black inspired others to display red dresses in their communities or start their own related projects, so ITSC organized a red dress drive to collect dresses for the display.

“I just really want people to be willing to learn and listen to the voices of their Indigenous siblings and help live in this space with us to help support us because the more people that are aware of this issue, the less women are going to go missing,” Kernan said.

Kernan said they think there is great power in being aware and having knowledge of these issues because it lets us lookout for one another.

“I want to show that this is a problem for everyone because we are people, we are valued and we are missed when we are taken away and murdered, and this is just a human issue on a very basic level,” Kernan said.

Indigenous women are murdered at a rate 10 times higher than the national average and it’s the third leading cause of death for Indigenous women ages 10-24, according to the Coalition to Stop Violence Against Indigenous Women and Native Women’s Wilderness.

“Many times Native people are targeted in border towns for the color of a person’s skin, anti-Indianism and the influences of settler colonialism,” the Coalition to Stop Violence Against Indigenous Women wrote.

“A lot of people will assume that it’s happening among Natives in Native communities,” Jensen said. “But a lot of the Native women are actually getting murdered, or a lot of these domestic violence relationships are happening with non-Native, particularly white, partners.”

Tribal communities are left searching for answers as to what happened to their sisters, mothers, aunts and grandmothers.

“There’s sort of this collective consciousness of loss and of dealing with that grief basically since Columbus set his foot on our lovely continent,” Kernan said.

The lack of answers is due to the disparities between federal, state, county, tribal and private jurisdictions and the relationships between governing entities, according to the Coalition to Stop Violence Against Indigenous Women.

“This is pretty prevalent on reservations that exist in more remote areas,” Kernan said. “To human traffickers, a lot of these areas are right for the picking. They don’t think that Indigenous women will be missed, which is completely untrue.”

It’s also important to note that these statistics aren’t always reflective of the issues that are happening because of the remoteness of certain reservations and incidents that are not reported, said Jensen and Kernan.

“We often don’t have the resources to be able to completely handle the cases of our own missing, murdered Indigenous women,” Kernan said.

Students, faculty and staff can attend a virtual discussion at 6 p.m. on May 6 led by Kristin Welch, a Menominee activist and the founder and executive director of Waking Women Healing Institute, titled “MMIW: Uplifting Matriarchy, Building Power and Collaboratives of Support.”

She also said she would encourage people to utilize Native news sources like Indian Country Today.

“I think one way, if you’re really interested in being an ally to Native people, is using their resources to see what issues are important to them,” Jensen said.

If you’re interested in joining ITSC, you can email Jensen at [email protected]

ITSC meetings are open to the general public. If you are interested in Indigenous issues, visit the Office of Multicultural Affairs website.

Steiler can be reached at [email protected].