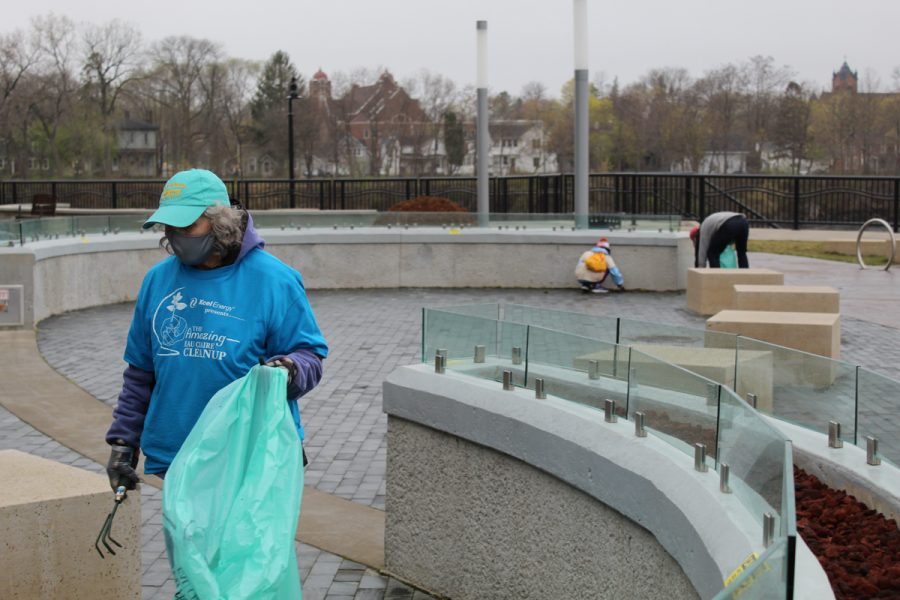 Volunteers clean around the fire features outside the Pablo Center during the city’s 13th annual “The Amazing Eau Claire Clean-up” event on April 24. Groups took to parks and trails across the city of Eau Claire from 9 a.m. to 12 p.m.

The event — put together by Eau Claire Parks, Recreation and Forestry in partnership with Downtown Eau Claire, Inc. — sends volunteers around the city to pick up litter and help with other small springtime tasks in community parks, playgrounds, neighborhoods, picnic areas, trails and the city.

While most participants volunteered between 9 a.m. and 12 p.m. on April 24, there were several organizations whose staff teams participated earlier on in the week, according to an Eau Claire Parks and Recreation press release.

Jake Wrasse, UW-Eau Claire’s legislative and community relations liaison and a DECI board member, said by the morning of the event, 916 volunteers were registered.

Wrasse, who spent the start of the event handing out supplies to volunteers in the Owen Park area, said he believed people signed up to volunteer as a way to support the community.

“There have, I think, been a lot of people signing up because everybody could find an area that is valuable and important to them,” Wrasse said, “And find a way to make it a social gathering as well for people they maybe haven’t seen in a while.”

Nicole Stevens, who participated as a part of the CURT Group team, said she believes it’s important for community members to support the parks by helping to keep them clean.

the community members that unfortunately live here and stay here,” Stevens said, “And make it beautiful for our tennis players and our dog walkers…just to get it back to a beautiful nature.”

AJ Sherman, who was also on the CURT team, worked with Stevens and picked up trash throughout Owen Park.

“I’m the chief operating officer of a local company called Achieve Wellness, which is a partner of CURT’s,” Sherman said. “And I heard they were doing a clean up at the park today so I thought I would come out and join them.”

David Hesketh and his family, all Eau Claire residents, spent the morning picking up trash — mostly cigarette butts and small pieces of plastic, he said — in Phoenix Park.

Hesketh said he decided to bring his kids out to volunteer to give them some experience cleaning up.

“They’re learning about Earth Day in school and we’ve been walking around our neighborhood picking up trash,” he said. “And they wanted to come out and clean up at the park.”

Hesketh’s son, Aiden, said he and his younger brother had been practicing for the clean-up day at his daycare, because he knew it was important to keep the parks clean.

“Because if it gets too dirty,” he said, “we might have to go on our tippy toes in the park and it’ll be harder to not step in trash.”

For those who missed the clean-up day, Wrasse said DECI looks for volunteers throughout the year for a number of different community projects.

“If you like the vibes of the downtown, the music and art scene, or if you are just interested in making your neighborhood a better place,” Wrasse said. “there are several times a year that we look to make sure people are able to have that kind of difference.”