Get to know Eau Claire through the “Get Lost” podcast 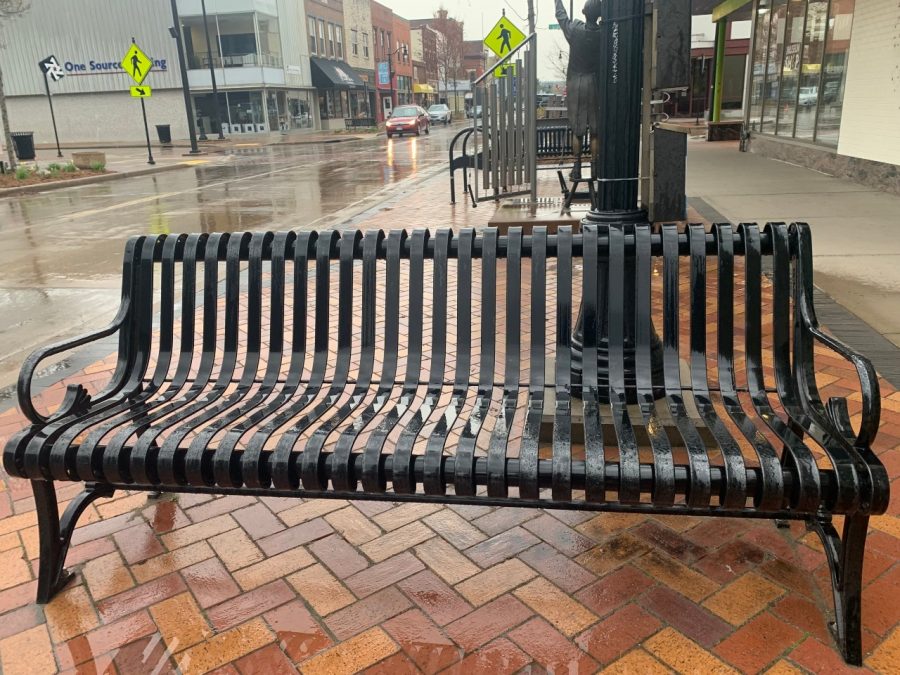 Pictured is the bench where Ryan and Katie, two former friends, reconnect from episode one: Downtown.

Stage productions are yet another item added to the list of events canceled by the COVID-19 pandemic. The UW-Eau Claire theatre program has had to make several changes to its operation in the past year.

But, students like Emily Szymanski, a third-year comprehensive theatre arts student, and KC Bray, a fourth-year music theatre student, are finding ways to maneuver around the pandemic regulations.

Szymanski and Bray are both part of a new podcast produced by the UW-Eau Claire Theatre department called, “Get Lost: A Walking Podcast of Eau Claire.”

“Instead of doing a traditional stage show, we came up with the idea for a site-specific podcast,” Szymanski said.

Each episode takes the listener around a part of Eau Claire, Syzmanski said.

“The episodes consist of different segments that aren’t necessarily related to each other beyond the physical proximity of where they are told,” Szymanski said.

A map for each episode, indicating where specific segments are intended to be listened to, can be found on the website.

There are currently four episodes out: Downtown, Carson Park, Ella the Elephant and Banbury Place, according to the website. The first episode, Downtown, begins at the confluence and slowly makes its way down Barstow St., ending at the Antique Emporium.

Bray said the theatre department has been trying out different multimedia projects because of the pandemic. In the past, they have worked on cinematic projects but wanted to try something different this semester.

“We wanted to help get people outside and into the community,” Bray said. “We hoped to make a fun and interactive experience.”

Part of ensuring listeners’ engagement included incorporating a variety of content into each episode, Bray said.

There is a wide variety of segments featured throughout. One episode alone can contain sketches, interviews, documentary-style, historic lessons and more, Syzmanski said. Each is separated by musical clips by students and local artists.

Because the topics are so dynamic, Szymanski said the podcast doesn’t centralize around one specific theme beyond Eau Claire.

“We made it a point to have a new genre in each episode,” Bray said.

Due to the nature of the podcast, it was sometimes challenging to make a cohesive story — but, it is supposed to be all over the place, she said. They like to look at it as a testament to the diversity of Eau Claire.

“It also goes to show how different all the minds working on this project were,” Szymanski said. “The contrast of the different segments shows the expansive creativity on the team.”

Those participating in the project split into small groups, where they were responsible for writing and recording three episodes. There were no guidelines or boundaries, Szymanski said. They had complete creative freedom.

Every group member was responsible for coming up with ideas and helping the writing process. From there, they chose actors from among the group to record the segments. Bray said he had been looking forward to trying out voice acting — he said it was a perfect opportunity.

Szymanski, more broadly speaking, was eager to create and perform alongside her friends again.

“In the past year, we haven’t had many opportunities to do any of those things,” Szymanski said. “The podcast was relieving in the sense that it gave me the chance to work and collaborate with others again.”

Szymanski’s favorite part of the creative process was writing. She said it was fun and fascinating to watch all the creative minds in her group come together and make these stories.

The three episodes Szymanski worked on all took on different styles, she said. One of them required a lot of research, while another was entirely fictional.

Bray also enjoyed the writing process, something he didn’t have much experience with. He said he was able to improve by experimenting and receiving encouragement, and sometimes critiques, from his group members.

“This was a very different collaborative experience than I’m used to,” Bray said. “There was no fighting over whose idea was better — we had to put our heads together and find a way to incorporate everyone’s ideas.”

They established, Bray said, there was no right or wrong — nothing they had to prove. Their goal was to ensure that every idea, every story, was shone throughout the episodes.

As a result, Bray and Szymanski got to know aspects of Eau Claire they hadn’t before. For Bray, he said he hadn’t realized how many historical aspects were right outside his door.

Working on the podcast caused Bray to realize how little he knew about Eau Claire, despite having lived here for four years.

Even if listeners can’t walk around Eau Claire while they tune into the podcast, it’s still worth listening to, Bray said. There is a lot to be entertained by, a lot to hear, a lot to learn about.

Szymanski hopes the university — and the community, too — will enjoy this refreshing taste from the arts program. She said the podcast proves that even in hard times, they can still find interesting new ways to perform art.

“We hope to provide new information and different perspectives that the community can reflect on and acknowledge and remember afterward,” Szymanski said.

Bray and Szymanski would like to thank all the creative minds that went into the podcast’s production, from those working behind the scenes on the production team to the musicians.

They would especially like to thank their director, Arthur Grothe, for granting them this creative freedom.

The “Get Lost: A Walking Podcast of Eau Claire” podcast can be found on their website or listened to directly on Spotify.