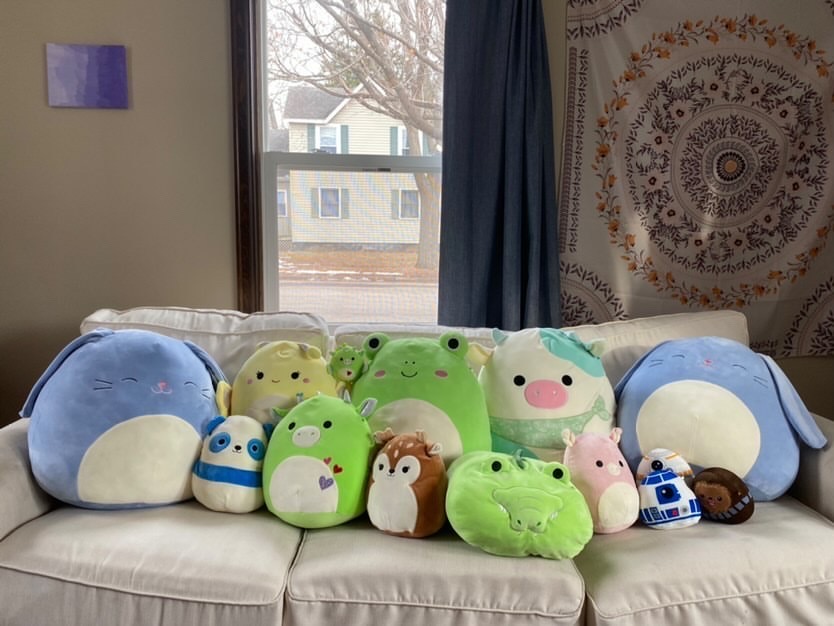 In two years, over fifty million squishmallows have been sold worldwide, according to the official squishmallow website.

With over 500 squishmallow characters available to collect and their very own jingle, the squishmallow craze has reached Wisconsin and students at UW-Eau Claire.

Morgan Hensley, a second-year broadfield social studies and secondary education student, has 26 squishmallows in her collection. She said ever since she bought her first squishmallow in October of 2019, her collection has continued to grow.

“It was a small, blue dinosaur and it was so cute, I just had to buy it,” Hensley said. “Later on, my boyfriend bought me a raccoon squishmallow and I became obsessed.”

Emma Wergin, a second-year behavior analysis student, is also an employee at Walgreens and said squishmallow hunting is a common occurrence.

Wergin said since the release of the newest Easter collection of squishmallows, she has seen about 100 people in the past couple of weeks come through specifically on a mission to find squishmallows.

The Easter collection, like every other squishmallow launch, is already sold out, Wergin said.

Second-year political science student and employee at Target, Haley King said squishmallows are almost always sold out there as well. She currently has six squishmallows and intends to grow her collection even further.

King said she purchased her first squishmallow as a gift for a friend, but ended up keeping it because she liked it so much.

“It’s just so fun to lay down in your bed after a long day and just be surrounded by plush little animals,” King said.

King said that social media in combination with the COVID-19 pandemic are contributing factors to the rise of squishmallows.

According to the Kellytoy website, “squishmallows plush toys are here to fill your hearts with love and affection.” 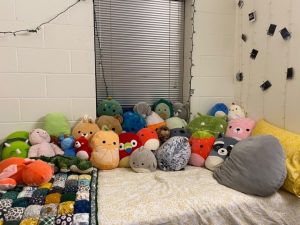 King said her squishmallows also help with her anxiety because it is nice to have something to squeeze onto to help her feel safe.

Hensley said they have also provided her comfort during this time of uncertainty.

“Holding something as soft and squishy as they help immensely,” Hensely said. “I also feel like the ones I’ve received as gifts are especially comforting because they remind me of loved ones.”

Noucee Thao, a third-year psychology student, has been able to get her hands on 25 squishmallows. Thao said she buys them for her niece but is looking to start her own collection.

Thao said because squishmallows are sold at stores that are hot spots for families, this has contributed to the increase in their popularity.

Both King and Wergin said the most popular demographic of people they have seen coming in to purchase squishmallows have been older, teenage girls.

“Now that we have big girl money, why wouldn’t we get it,” Thao said.

Kulas said apps like TikTok have helped her know where squishmallows are sold and their popularity on the social media platform eventually helped her decide to buy one.

Kulas, like many other fans of squishmallows, is keeping her eyes open for the latest Easter collection.

The hunt is on for the latest drop as most retailers have sold out within weeks.

If you are looking to hunt one down, here is a list of common retailers:

Best of luck on your squishmallow hunt, Blugolds.

Gómez can be found at [email protected].