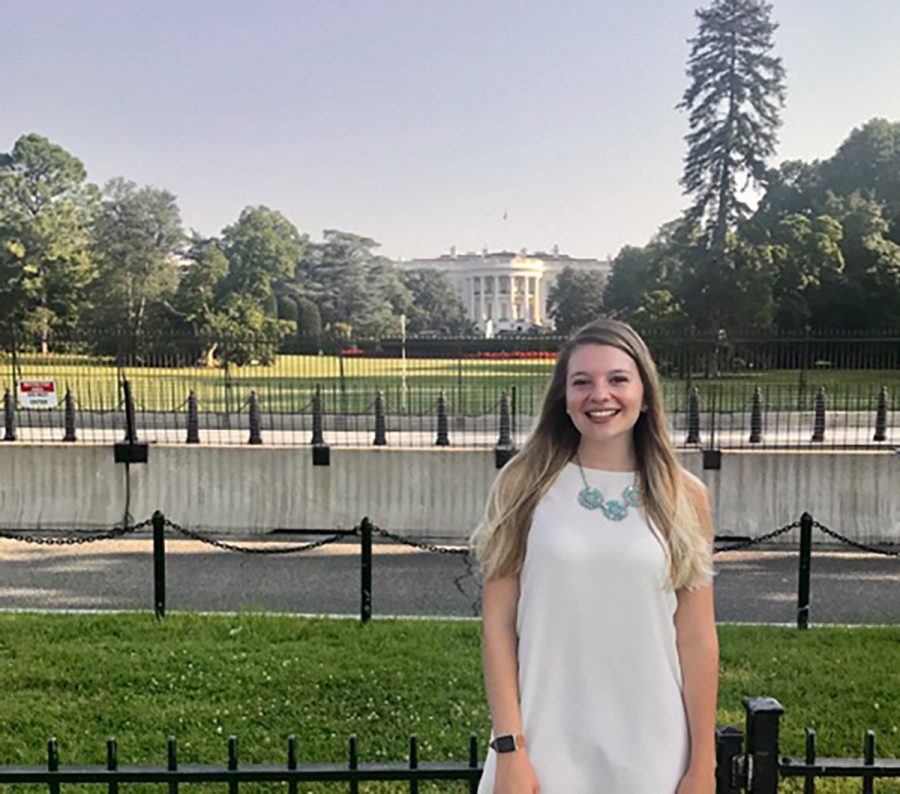 Junior public relations student Janel Riegleman, a communications intern for Marsy’s Law for Wisconsin, hopes to one day move to Washington D.C. to become a communications director for a politician.

According to the FBI’s crime clock, a murder is committed every 35 minutes. Every one and a half minutes, someone is robbed; 40 seconds from now, someone’s car will be stolen. In Wisconsin in 2015, approximately 18,000 violent crimes were committed.

When discussing crime, the majority of people tend to focus on the arrest of the perpetrator. However, for Janel Riegleman, a junior public relations student, the focus is on the victims.

Being the victim of a crime is nothing short of stressful; it’s easy to get lost in the legal jargon. Yet, Marsy’s Law for Wisconsin is determined to lend a helping hand to victims.

As a communications intern for Marsy’s Law for Wisconsin, Riegleman works to ensure and protect the rights of crime victims in Wisconsin.

“When a criminal is charged, they’re given a list of rights,” the Marsy’s Law for Wisconsin website stated. “But what about rights for victims and their families?”

Mary’s Law for Wisconsin is a grassroots movement working with a broad coalition of Wisconsinites seeking to secure equal rights for victims of crime.

The coalition works with Attorney General Brad Schimel and the Department of Justice’s Office of Crime Victim Services alongside the victims themselves, law enforcement and state legislators to make sure the rights of the victim are equal to those of the accused.

“What Marsy’s Law wants to do is build upon already-secured rights that we have in our state statutes in order to make that a Constitutional amendment,” Riegleman said.

Marsy’s Law was founded after Marsalee “Marsy” Nicholas was murdered by her ex-boyfriend in 1983. After visiting her grave, Marsy’s mother and brother, Henry T. Nichols, ran into her accused killer at the grocery store. Neither of them had any idea her killer was back on the streets.

“The United States Constitution currently provides specific rights for those accused of crimes, but fails to provide equal rights for victims of crime,” Henry T. Nichols, chairman and founder of Marsy’s Law for All, said on the organization’s website.

Marsy’s Law was unveiled in Wisconsin last April, Riegleman said, but she has already had the opportunity to travel around the state to spread the message of Marsy’s Law.

As a communications intern, Riegleman is in charge of the social media postings, blogs and occasionally press releases for Marsy’s Law. Having a major in public relations and minor in political science with an emphasis in legal studies, Riegleman said her internship has set her on the path to success.

“As communications intern, Janel helps with a variety of the daily communication tasks that our organization utilizes to connect with the community and update our supporters about our efforts,” Myranda Tanck, Riegleman’s boss at Marsy’s Law for Wisconsin, said. “From authoring blog posts to developing social media content to monitoring media coverage, Janel’s daily efforts are invaluable to Marsy’s Law for Wisconsin’s public presence.”

When she was offered the position of communications intern eight months ago, Riegleman said she visited the website of Marsy’s Law for Wisconsin and quickly realized the reality of providing crime victims with equal rights.

“I believe that no one should be treated unfairly in our judicial system and Marsy’s Law for Wisconsin really aligned with my opinion on that,” Riegleman said. “Obviously, it was really easy for me to get energetic about it … It’s an awesome opportunity for our state.”

In order to understand the importance of equal rights for victims, Riegleman encourages people to imagine themselves having to come forward after something horrible happened and being overwhelmed with the complexities of the judicial system.

In this case, Marsy’s Law would ensure a victim is informed of their rights and that they are just as equally protected as their accusers.

“Some of the things that Marsy’s Law for Wisconsin would ensure are need-specific rights,” Riegleman ensure. “For example, the right to be treated with courtesy, fairness and respect for their dignity and privacy during the criminal justice proceedings. Those are some things we really want to work to make sure any victim of crime is given.”

After graduating from UW-Eau Claire, the Oconomowoc native hopes to relocate to Washington D.C. and work to become the communications director for a politician.

As a goal-driven person, she said she is glad she got hands-on experience before graduation.

“I know any internship does that, but I felt extremely lucky to write blogs, to do social media proposals and help with press releases,” Riegleman said. “It really does help with my goal of one day, further down the road in PR, opening my own communications platform.”

In addition to her internship, Riegleman finds time to give back to her community. In her little free time, Riegleman volunteers at her church’s nursery and is a member of United Way, a volunteer group on campus. Passionate about politics, she said she also makes sure to stay tuned to what’s going on in the capitol, which, she added, is enough to keep anyone busy.

No matter how busy her schedule may be, Tanck said Riegleman manages to stay dedicated to her work advocating for victims of crime.

“Janel manages an immense amount of responsibility and is always exploring ways to improve,” Tanck said. “On top of her regular work, Janel regularly seeks out new opportunities to spread our message of strengthening rights for crime victims.”