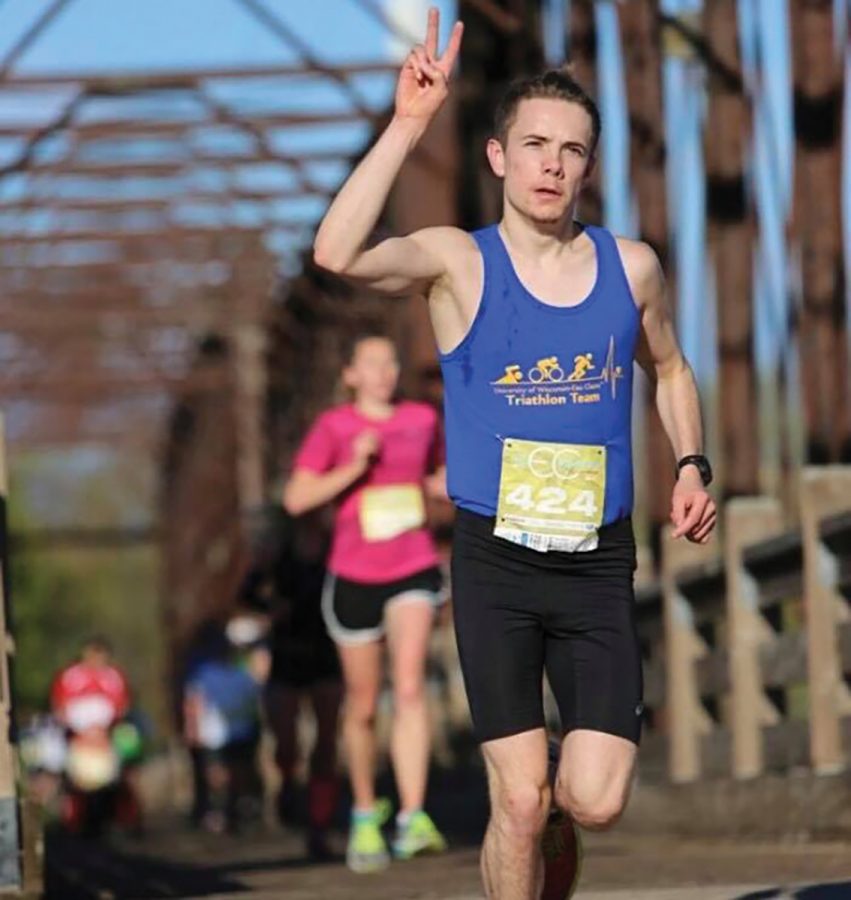 Wyatt Pajtash will compete in the Boston Marathon this spring. An athlete on the cross country ski team, Pajtash uses his fitness in skiing to help him in running.

Turns out, it might not be too hard to run a marathon, after all. After never running 26.2 miles at once to running the Eau Claire Marathon under three hours, a first-year student from UW-Eau Claire qualified for the Boston Marathon.

Now a sophomore, Wyatt Pajtash is a student studying geography and economics. It all started with skiing, he said. He competed in a few ski marathons, ran some half-marathons and decided to take the next step. Coming from a small town in Wisconsin in Bayfield County, Pajtash has competed in races in his community, is part of the university’s nordic ski team and also participates in triathlon club.

The high-profile race on the country’s east coast requires for this age group to finish on or before 3:05.37, the fastest time for any age group. The race is set for April 16, 2018 in Boston, and 30,000 competitors have already registered for the event.

Pajtash said he credits his athletic abilities in skiing to the overall success in the Boston Marathon, but he had more than just his fitness going into the race.

“I’m a skier first and a runner second,” he said. “I think that’s how it works.”

Erin Brault, the president of Eau Claire’s Cross Country Ski Team, said the two translate really well together. As a team, they cross train for skiing, which include running and biking workouts.

At the time the 19-year-old student ran the marathon, he said he trained for about two and a half months outside of the regular skiing season. He said some of the muscles worked in skiing also transfer over to running, making the transition between the two sports not too arduous. A few of Pajtash’s friends biked along the course and met him every five or 10 miles, cheering him on and replenishing electrolytes to give him a boost of energy.

Part of this support team, which includes his parents, sister and grandmother, is also coming to Boston with Pajtash. Nathan Johnson, who filmed Pajtash before and during the Eau Claire Marathon and is one of his current roommates, also decided to make the trip to support his friend.

The sophomore geology student first met Pajtash through a mutual friend and within about five minutes, Pajtash asked Johnson if he wanted to join their ski team. Johnson accepted the offer and the two have been friends ever since and participate in the cross country ski team together on campus.

“A lot of people try their whole lives to qualify for the Boston,” Johnson said, “and he just ripped it out the first marathon ever.”

Because of his ski fitness, Johnson said he thought Pajtash would be able to finish the marathon with a fast time, but he said Pajtash didn’t even consider the fact he could qualify for the Boston marathon. He said, however, he was worried his friend would go out too fast and lose steam later in the race.

Training for a marathon is no small ordeal, either, Johnson said, but his friend’s motivation and endurance are strong. He said skiing played a significant role in this physical and mental capability, which helps keep him energized.

“He ran it like an experienced marathon runner, even though it was his first time,” Johnson said. “He doesn’t exactly feel pain like other people feel it, he’s kind of an animal is how I describe him.”

As a fellow athlete, Johnson said he has to tell Pajtash when to take a break, because he is always ready for the next challenge and wants more.

In fact, Pajtash said he considers doing an ultramarathon one day, running 50 or 100 miles, only resting for a night and proceeding to finish the race the next day. He said he would consider getting into races like these after college.

A key aspect of training for a marathon he said, is fitness. He said listening to your body is vital and if you do too many intensive workouts, you are more prone to injury. When he trained and did long runs, he split the distances up between days. For example, if he had to run 20 miles in a weekend, he would run ten on Saturday and the rest on Sunday.

At the moment, Pajtash has an injury on his Achilles tendon, which connects the muscles in the calf to the heel of the foot. He said if the problem recurs, he might become more nervous for the race, but he is excited and looks forward to going out to the East Coast. Even if he is injured, he said he will run the race, because the main point is to be there.

“Getting there was fun, running the Eau Claire Marathon was fun and there will be more marathons in the future,” Pajtash said. “There’s more of life to live.”

Pajtash’s mother, he said, was the real reason they are going out to Boston. Her excitement for him, as well as learning about the qualification process, determined the opportunity was out there and that they’d better seize it.

“She came to the Eau Claire Marathon with my grandma, and they were also walking around,” Pajtash said. “They really got into it at that point.”

Johnson said he is also excitingly awaiting the trip to Boston, as he has never been to the city before. He said he will run a marathon someday, but is going to take his time doing so.

Currently, Pajtash is immersed in the cross country ski season and will be competing in a few ski races in Wisconsin and Upper Michigan over the winter. He will also compete in American Burkebiner, the largest ski race in North America later this winter with approximately 10,000 competitors the race draws annually.