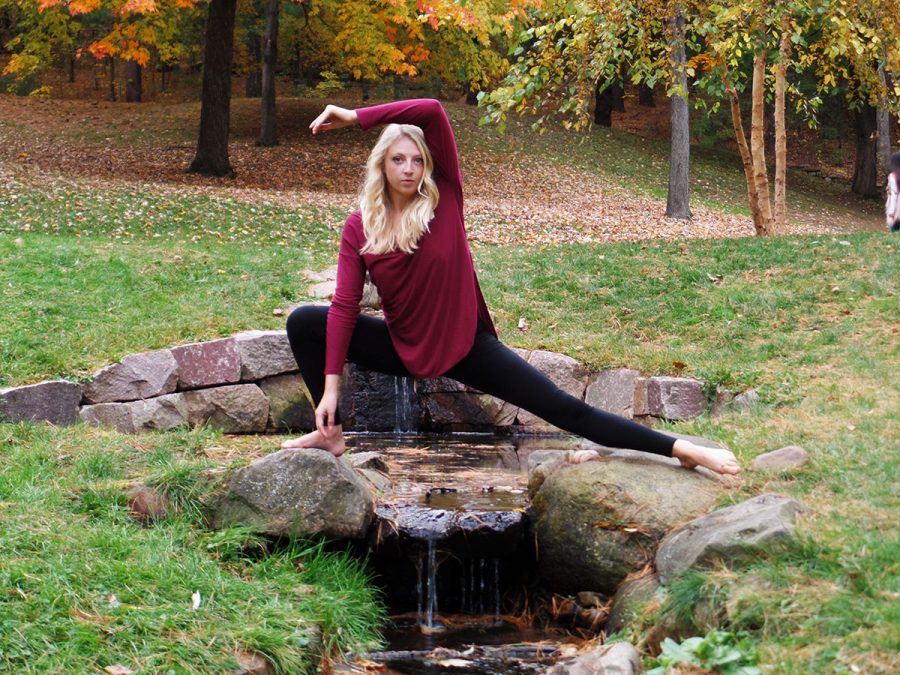 Sophia Jacobsen, a junior marketing student, dances and teaches at the Eau Claire School of Dance.

The chance to pursue a passion beyond the base level does not come for some; but for one UW-Eau Claire student, possibilities keep coming her way.

“When I was younger, I never thought I’d have this many opportunities or this many doors would open,” said Sophia Jacobsen, a junior studying marketing with a certificate in international business.

One of the things Jacobsen said she has had the opportunity to do during college is dance. She has been dancing since she was in fifth grade and thrived from the moment she started. The aspect she loves the most about dancing is how freely one can express their thoughts through action.

Dancing was something she said she was “good” at from the time she started, which wasn’t the case for most of the sports she tried. She danced at Lake Area Dance Center in White Bear Lake, Minnesota, and eventually went on to compete for her high school performance dance team.

Throughout her life, Jacobsen said she danced competitively for six years. She did three years of hip hop and within the next three years she added tap, jazz and contemporary. Her team placed first in multiple competitions, and she was awarded a scholarship from her nationals competition during her senior year.

Jacobsen said she has had her fair share of potential career paths. She went from wanting to be a veterinarian, to a human doctor, to a dancer and then things finally settled down during her senior year of high school when she joined Distributive Education Clubs of America (DECA).

DECA is a business competition and international association that prepares students for careers in business, finance, hospitality and marketing sales and service.

It was after she experienced the business world that she knew she wanted to get a degree in marketing, but there were still many things Jacobsen said she wanted to experience in college before going off and becoming a “successful” businesswoman.

Jacobsen said she decided she wouldn’t be dancing in college, so she took the summer going into her first year of college off, which she quickly realized was one of the hardest things she’s ever had to do. Little did she know she would get an opportunity to dance in college shortly after the summer ended.

Going into her first year of college Jacobsen said she knew she was going to have to find a job, but she had no idea what that job would consist of. One day on her way to class, she saw a flyer on the Blugold bulletin board for the Eau Claire School of Dance (ECSD) that said they were looking to hire new dance teachers. She applied, got hired soon after and has been working there ever since.

At first she said she was hesitant because she wasn’t sure how this job was going to further her future as a marketing major, but Jacobsen said there’s always a connection that can be made.

“I have always loved traveling to competitions, meeting new people and knowing the structure of how things were going to go,” Jacobsen said. “As much as I hate to admit it, I do love healthy competition. Marketing and dancing are a good dose of that.”

She started at the front desk, then moved up to a part-time job on the clerical staff and is now working as a full-time dance teacher. She instructs children ages five to 14 and teaches a total of seven different classes.

Her fellow dance teacher, Emily Varner, a junior business marketing student said she is always learning when she’s around Jacobsen.

“Sophia has a lot of great energy when she is teaching the dancers,” Varner said. “Sophia is never an apathetic teacher and always teaches with passion. The dancers just love to be around her because she is always prepared.”

During her time at the ECSD she said she has learned a lot from teaching children, but so far, she found that the little things are most important to her.

“When I realized that I’ve made the link between teacher and friend that’s always a bonus,” Jacobsen said. “When I teach a student something, like new dance vocabulary, and they finally get it, that’s really rewarding.”

Though her love for dance will always be a part of her life, she said she is realistic about keeping it as a hobby instead of a career after graduating.

“When I get into the real world I probably won’t be able to dance as much as I am now and I wouldn’t be able to make a living as a dance teacher,” Jacobsen said, “but I’m going to continue to take dance classes and dance for fun in my free time.”

Currently, Jacobsen is a teacher at the ECSD, a blogger for a start-up company called My Vacation Rentals in Los Angeles and an intern at the at the Center for International Education on campus. She said her plans after graduation include traveling, dancing and keeping an open mind about the jobs that she’s offered in her field.