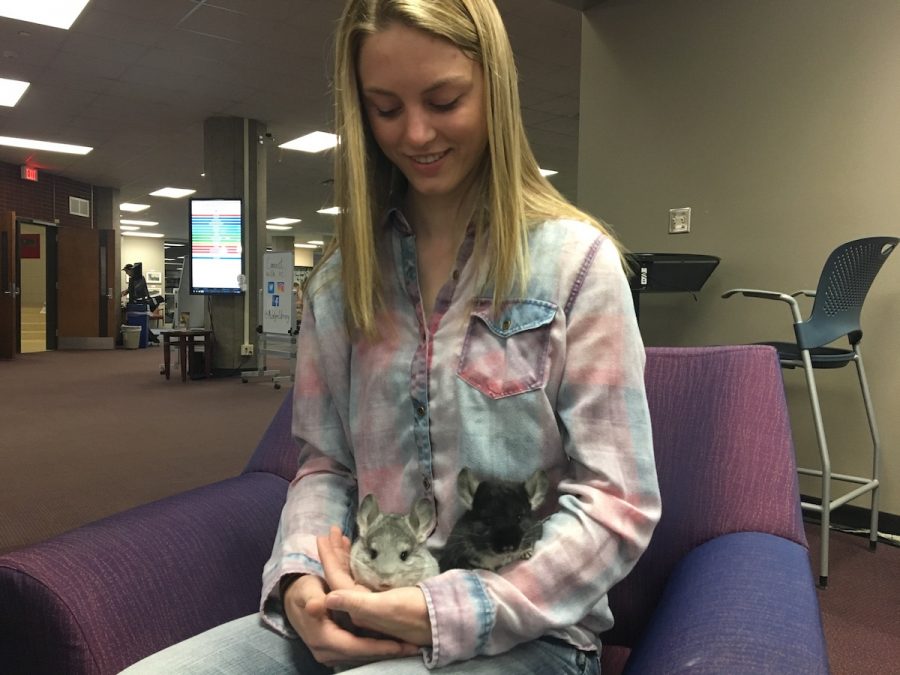 Bobbie Schultz said she hopes running Bobbie’s Chinchillas is what she does as a career, and is excited to see where her business can go.

Being able to turn a lifelong love of something — a hobby or an animal — into a career is a dream for some. Bobbie Schultz, a business management student and soon-to-be UW-Eau Claire graduate, has done just that.

Bobbie will be graduating in December after just two and a half years at Eau Claire. She is able to graduate so early because she came into college with 21 credits, devoted some summers to conquering prerequisites and endured a rigorous course load each semester. Being in the honors program didn’t hurt her swift progression towards a degree, either, Bobbie said.

“My time at UW-Eau Claire has gone so fast, but I’ve definitely enjoyed it,” Bobbie said.

Her decision to graduate early had been made before her college career began, Bobbie said. This is because she had a future endeavor in mind: Her chinchilla breeding business, called Bobbie’s Chinchillas.

Bobbie’s full-fledged chinchilla breeding business all started with a gift. When she was 7 years old, Bobbie said she received her first chinchilla as a combined Christmas and birthday present.

Bobbie’s mother, Brenda Schultz, said she initially was going to get her daughter a guinea pig. However, Brenda was soon convinced by a pet farm owner to purchase a chinchilla instead.

Through the pet chinchilla, who was named Snowball, Brenda said she wanted to teach her daughter about genetics.

“I’ve always been very interested in genetics, and wanted Bobbie to learn about them through breeding and cross coloring,” Brenda said. “We’ve learned that chinchillas actually have very complex genetics.”

Bobbie began showing chinchillas soon after she was gifted the initial one as a pet. Bobbie said she soon realized that chinchillas have a lot to them. Chinchillas became more than just pets in her eyes, she said.

The first major expansion of her chinchilla “herd” — an import of 12 chinchillas from Oregon — and the initial steps into the business side of things occurred during her freshman year of high school in 2012, Bobbie said.

It was at this point that she started importing chinchillas from all over, in all different colors and breeds, Bobbie said. She also created a Facebook page and website in order to get the word out about her breeding business.

The advancement of Bobbie’s Chinchillas was done primarily by Bobbie, Brenda said. Bobbie’s father helped with marketing, but for the most part Bobbie’s parents simply offered their undying support and watched where Bobbie took her business.

“We have always wanted our kids to follow their dreams,” Brenda said.

Bobbie currently has “a couple hundred breeding female chinchillas,” which she keeps their entire lives. She said she tries to name all of the females she keeps, but doesn’t name the babies or the males that she sells.

From the chinchillas she has, the ratio of male to female is “one to three,” Bobbie said, and she currently has 50 babies to sell. This number is on the low end, Bobbie said, and “the babies have been selling really fast.”

As of right now, the chinchillas are all kept in her parents’ garage, Bobbie said. However, this is soon to change. She said she recently purchased land in the Eau Claire area and plans to begin building an actual facility for her chinchilla business in the spring.

The facility will be spacious enough to hold the animals, and will also include a showroom where interested customers can play with and meet the chinchillas, Bobbie said.

While Bobbie said she would typically have around two to three part-time employees to help clean cages when she expands the business, she currently is the sole employee of Bobbie’s Chinchillas.

In regards to her business, Bobbie said the tasks of cleaning and dealing directly with customers are what take up most of her time. This is something she said will hopefully become easier with the expansion.

“Right now I am able to just handle it because of my class schedule,” Bobbie said.

Bobbie said she typically dedicates one day per week to cleaning out the cages. A typical day for her involves a morning check-in on her chinchillas, making sure they’re fed and watered before she heads to class.

Between classes, she said she often is communicating back and forth with customers. Finally, after she gets home, Bobbie said she’ll give the chinchillas one last check if needed.

While there have been instances where Bobbie has needed to hand-feed some of the babies, which involves around-the-clock feeding every two hours, Bobbie said chinchillas are “pretty easy” to take care of.

“Chinchillas are pretty low-maintenance animals. They don’t drink a lot of water, so they don’t stink like rabbits do. They’re not like your typical rodent,” Bobbie said.

Bobbie said running a business of her own has been an incredible experience that has helped her grow as a person.

“It has taught me a lot of responsibility. I have a reputation to upkeep, so I have to continuously hold myself accountable,” Bobbie said. “I’ve learned how to balance school, my business and other side jobs I’ve taken on and still be able to complete everything to the fullest.”

Bobbie’s communication with customers doesn’t end immediately after a purchase. She’ll often provide support after the animals go home and will help resolve any issues that may arise. Bobbie wants to make sure both the people and the animals are happy, she said.

There aren’t many breeders like Bobbie’s Chinchillas in this area, Bobbie said. The closest that she knows of resides in Madison, Wisconsin.

“People have kind of just gotten out of the business and moved on with their lives,” Bobbie said. “So besides pet stores, which usually only carry the natural grey color, there are maybe only a couple small breeders here and there.”

Bobbie said she has people come from all over to purchase her chinchillas. To Bobbie’s surprise, there aren’t a lot of local sales. A large number of her customers are from the Twin Cities, she said, and the furthest someone has driven for a purchase was 11 hours.

Business has been going well and it continues to grow, Bobbie said, which may be because she has gained more of a presence in the community and beyond.

“I’ve been raising chinchillas long enough that I think people kind of consider me to be a professional breeder,” Bobbie said.

Her business has been around for a few years, and the attention on her Facebook page and her positive customer reviews have likely assisted in her business’s success, Bobbie said.

On top of building the new facility, Bobbie’s immediate post-graduation plans are to get her broker’s license and become USDA certified, she said.

Taking these steps will help her “differentiate herself” and allow her to ship chinchillas nationally and internationally, Bobbie said. Bobbie said she also will be able to wholesale, which means selling directly to pet stores, if she chooses to go that route.

While she has already added sugar gliders and some reptiles to her inventory, chinchillas will always be her favorite, Bobbie said. All in all, she said she hopes to continue showing people how great “chinchillas” are. This will ideally be what she does as her career, she said.

“Not everyone knows about them (chinchillas), or how they make great pets,” Bobbie said. “They’re such curious little animals, they’re hyper and entertaining. They’re just unique.”