Speaking for the bees 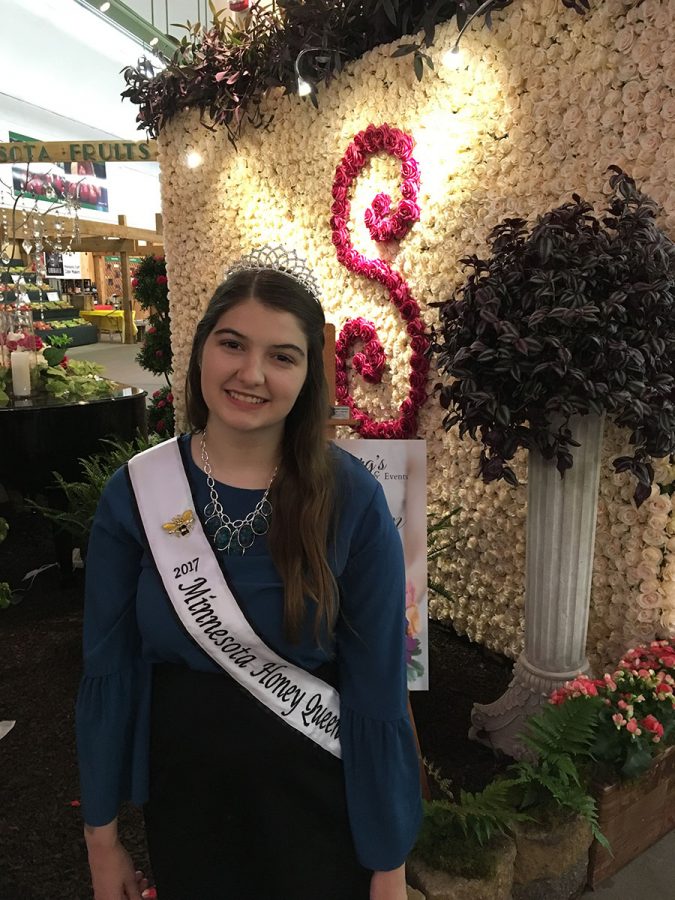 Sarah Doroff, a senior science and sociology student, was selected to be the 2017 Minnesota Honey Queen in July. She is an advocate for and representitive of the beekeeping and honey industry in Minnesota.

That is the single word one UW-Eau Claire student used repeatedly to describe her year-long role as the representative for the beekeeping and honey industry in Minnesota.

Sarah Doroff, a senior science and sociology student, was selected as the 2017 Minnesota Honey Queen in July after competing for the position at the Minnesota Honey Producers Annual Convention.

The position, which is an education-based competition where young women compete by using their knowledge of beekeeping, allows one woman between the ages of 17 to 23 to be the advocate and spokesperson of the Minnesota honey industry for one year.

“I never thought I would actually be the Minnesota Honey Queen, so it’s really weird holding (the crown) in your hands,” Doroff said. “I keep the sash hung up sometimes and I look at it and think to myself ‘I am an agricultural representative for the honey industry in Minnesota.’ It’s such an awe moment.”

Doroff was selected for the position after being judged within four different categories at the convention in July. Contestants must submit an application before being accepted to compete at the convention, after which they are judged on their personal skills, a marketing presentation on honey, an essay portion and an interview.

As a part of the Honey Queen responsibilities, Doroff is required to set aside two weekdays and two weekends a month for queen appearances. She travels to schools, fairs and anywhere she is requested to speak on behalf of the honey industry. Though it can be stressful, she said it is still an “incredible experience.”

Doroff first began beekeeping after her sophomore year of college when she came home to a garage full of beekeeping equipment. A family friend got her family interested in the hobby and was intending to give them two splits of his hives before passing away. Because her father already had the equipment and had taken a class, he decided to get bees on his own.

Doroff herself became seriously involved in beekeeping in the past two years. In her first year,  she shadowed her father, watching and helping him with hive inspections and taking pictures. She became more and more involved in her second year, and by her third year, Doroff said she was doing hive inspections on her own.

Her family has four hive locations, all within thirty minutes of her St. Cloud, Minnesota, home. In the summertime, Doroff said she spends about five to 10 hours a week caring for her hives. During the school year, this task becomes harder, and she spends only about an hour a week caring for them.

Doroff said being a spokesperson for the bees is important because they “don’t get very much publicity” and “don’t get to speak much.”

“I’m really interested in being an advocate for bees because bees can’t talk, and our honey bees need an outlet,” Doroff said. “We need to be able to protect our pollinators because they are so beneficial.”

Willie Miller, the vice president of the Dunn County Beekeepers Association and a facilities worker at UW-Eau Claire, was the person who got Doroff involved with the local club.

Doroff said she met Miller in The Cabin while she was talking to the staff about the non-locally-made honey supplied there and he happened to be there at the same time. The two got to talking about beekeeping and Miller, a beekeeper since 2010, invited her to a meeting for the Dunn County Beekeepers.

Miller said Doroff is very passionate about beekeeping, saying she spends a lot of time running between school and home to take care of her bees.

“She’s very dedicated,” Miller said. “She’ll go home on the weekend to work with her bees.”

Furthermore, Miller said it takes a lot of courage to take up the hobby without having had formal training, which Doroff has not. She said she learned entirely from shadowing her dad.

“To just pick it up without any form of training, that takes a lot more guts than to not know anything (about) what you’re doing — if you’re doing it right or wrong,” Miller said. “It takes a lot of passion to do that.”

Even though Doroff hasn’t ever had any formal training, she’s still very knowledgeable about her field — after all, it is a requirement for being the Honey Queen. One major event at which Doroff was able to share her knowledge of the beekeeping and honey industry in Minnesota was the Minnesota State Fair, where she made six days of appearances.

Though exhausted by the end of every day, Doroff said she loved every minute of it. She did cooking demonstrations, extracting demonstrations, interviews and walked around the fair handing out honey straws. Honey flavored ice cream and lemonade were sold. Above all, Doroff said her favorite part of the fair was operating the honey booth and the tasting booth.

“It’s nice to market my industry and market what I do as a Honey Queen,” Doroff said. “It usually helps sparks some interest in being a Honey Queen and what I do.”

Her favorite part, she said, is seeing the expressions on younger girls’ faces when they see her wearing her crown and sash.

While being the Minnesota Honey Queen is a welcomed opportunity for Doroff, she said she hadn’t always seen herself as one day holding the title. Instead, she said she had always dreamed of becoming the Dairy Princess as a little girl. However, this dream diminished as Doroff realized her lack of cows put her at a disadvantage.

Nonetheless, Doroff said she is grateful for her experience as the Honey Queen. She described it as a “sisterhood,” where she and past honey queens are able to share their experiences with each other.

“It’s hard to describe how it feels,” Doroff said. “It’s an incredible feeling because I love being a Honey Queen. Some days it’s stressful when you have to make sure deadlines are met to make sure you get your article in the quarterly newsletter for the Honey Producers and getting your Facebook page updated. But it’s an incredible experience.”

Doroff said she will continue beekeeping even after her reign as Minnesota Honey Queen is over. In the future, she said she will run for the American Honey Queen or Princess position, where she would be a national spokesperson for the honey industry should she be selected.