The group creates an inclusive learning environment and home for students 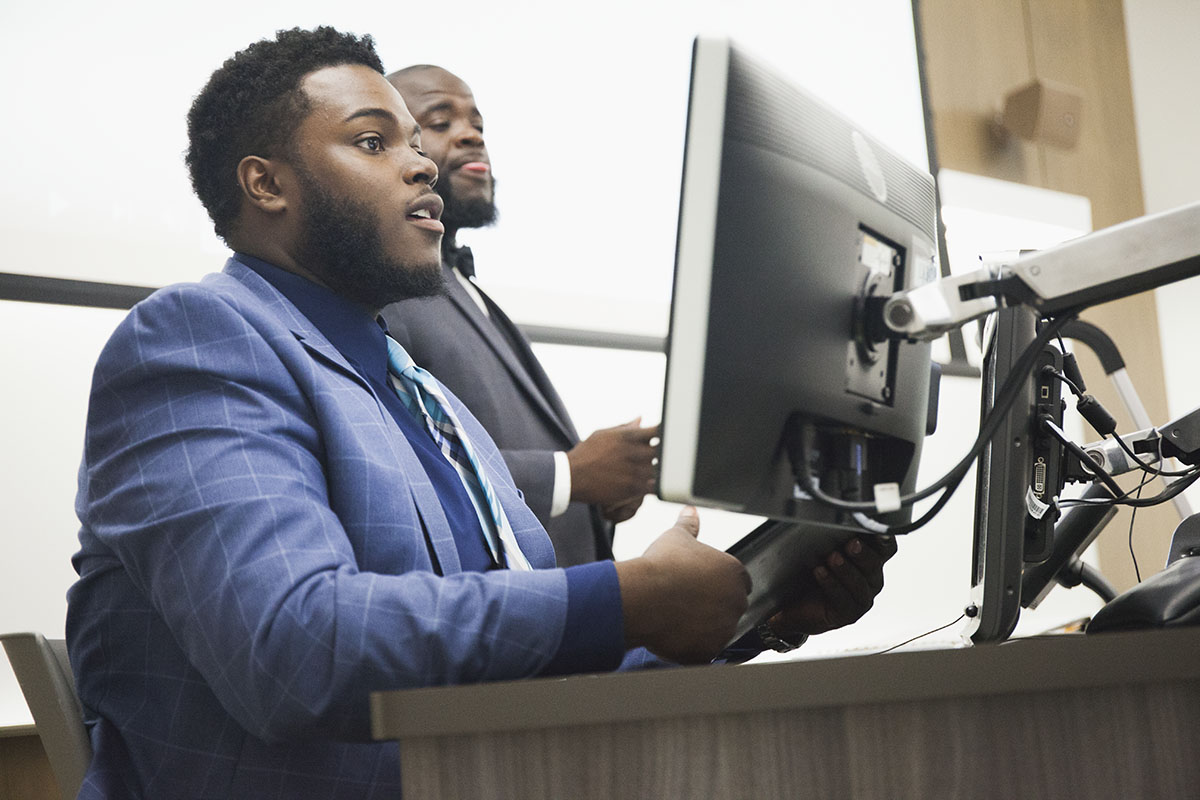 For many students, going to college means leaving family behind, but for others it presents an opportunity to form a new one.

“I love those guys, if it weren’t for them, I probably would have transferred from Eau Claire,” Williams said. “I was a little bit culture-shocked when I got here, but having those guys, they had my back, and just always being around them made me feel comfortable and I love it.”

Beginning last February, BME is a group giving students the ability to express themselves, gain professional development skills and connect with other students and the community.

BME’s adviser and founder, Dennis Beale, said the group’s beginning stemmed from the gun violence occurring in inner cities such as his hometown of Chicago.

“It actually transpired from me losing a colleague and actually one of my close friends Derrick Swanigan who passed away from a fatal gun shot in Chicago and in his remembrance,” Beale said.

Beale said the group’s mission is “to bring together men of distinction to form a brotherhood that can’t be broken and to put a positive imprint on the world and to bring black male empowerment to the institution.”

The 19 men involved in BME, like Beale, are from inner cities around the Midwest, and they consolidated over that aspect through Blugold Beginnings.

BME has become more than they could have imagined, Beale said, and they are eager to take it to the next level.

Originating from large urban cities such as Madison, Wisconsin, Milwaukee, Minneapolis, Indianapolis and Chicago, and transitioning to rural Eau Claire, the members converged over this fact and created a kinship.

Collis McCloud, the president of BME and a fifth-year business management student from Chicago, said when he came to college, he and his cousin were two of few African-American students on campus. It wasn’t until 2015 when Williams’ class came in that the two men met other students in similar situations.

McCloud said when he heard about a group of men all from different inner cities around the Midwest who were coming through Blugold Beginnings, he knew he wanted to “jump on that train” and join them.

Soon after introductions, the men went on a university-organized 10-day civil rights pilgrimage through the south, stopping at major historic cities along the way. In addition to visiting monuments and historic locations, Williams said they met different activists who participated in Bloody Sunday, volunteered in the schools and participated in a slave reenactment that touched him and many others on the trip.

One of the things that stood out to Williams throughout the trip was the amount of segregation still occurring in the south.

“It changed my life in many ways — just the fact that I thought I was woke (aware) — but after going on that trip I became more aware of what’s really going on in places outside of the Midwest or the West Coast,” Williams said. “Just how bad things really are in the South still.”

The men who took part in the pilgrimage were able to speak with people who lived through the Civil Rights Movement, and McCloud said they taught them about their history and how it affects them now.

“We already had a bond, but I think that 10 days being away and just learning together about our history really made our bond that much stronger,” McCloud said. “And then coming back to campus and knowing that we had a voice and had a purpose for why we were where we were at that time, that was great.”

BME is more than just a club or school organization, Williams said — it’s a family.

“We do pretty much everything together; I consider those guys my brothers,” Williams said. “We hang out together, no matter what, we go out together … chances are, you aren’t going to see one of us without the other.”

Along with their time spent in meetings and at events, the men see each other on a regular basis. McCloud said 12 of the members live in the same apartment complex, so finding time to hang out isn’t difficult.

BME members also encourage each other both on and off campus, McCloud said. This past weekend any members who could piled into a car and drove to St. Paul to support their fellow members playing on the Eau Claire football team.

“No matter how long the drive is, we are going to support our brothers,” McCloud said.

Every Wednesday, all members of BME dress up in professional attire, whether that be a dress shirt, slacks and tie or a full suit.  At the group’s weekly meetings, the members of BME discuss topics within specific professional development themes, such as success, leadership and financial literacy, Beale said.

Doing everything together, from enhancing their skills to having each others’ back, allows them use their relationships as a way to share the experience of developing their own voices and preparing for their futures.

“The brotherhood was already there,” Williams said, “we just put a title on it.”

Although they are still in the planning stages and this year Beale said is about establishing their brand and getting their name out in the community, BME has already done fundraisers and has done outreach in the community.

As part of their professional development mission, Beale said last semester he had employees from Elite Sports barbershop[SP5]  in Eau Claire come in and cut the BME member’s hair to give the men fresh looks.

Furthermore, on Fridays ­­the group sold Frooties, fruit flavored chewy candy that Williams said is often sold in the inner-city neighborhoods in Chicago, as a way to bring something from their hometown to the area and another opportunity to strengthen their bond.

“It was fun we always just brought life to it,” Williams said. “There was a group of us at the table selling Frooties just joking around having fun. I considered it bringing Chicago to Eau Claire.”

According to the Eau Claire Office of Institutional Research’s Factbook only one percent of the entire student population is African-American. Out of all students of color, about 11 percent are African-American.

Beale said if the university wants to increase these numbers, the city needs to be ready for it.

“As we allude to the goal of 20 percent students of color by the year 2020, we have to make sure our campus and our greater Eau Claire community is prepared for that,” Beale said.

BME is composed of 18 African-American students and one Caucasian student. Beale believes this group will teach the members and others about diversity.

“I feel like diversity is not based off of your skin color,” Beale said. “It’s based off pretty much where you come from. So I’m not trying to change these young men, I’m just trying to help them adjust and adapt to an environment like Eau Claire.”

Through their community work and meetings where they learn about skill building and develop professional attributes McCloud said they are given the platform to expose others to diversity.

“Seeing us in our business professional attire and how we carry ourselves, how we speak and how we interact with other people,” McCloud said, “I think it makes people who haven’t experienced much diversity in their life much more comfortable which in turn makes the university much more sociable and much more conforming to diversity.”

McCloud said this group is important to campus to be a resource for students but also to illustrate that African-Americans from the inner cities are not here to cause problems and they deserve equal opportunities.

The topic of diversity is one that has resurfaced at Eau Claire within the past few years. In fall 2016 a student had written “UWEC is racist” on one of the free speech boards on campus.

Members of BME are working to tackle the topic of diversity and spread awareness throughout the community.

“To be truthful there is a big thing with institutional racism and if we have a group of black males that’s doing something very positive on a predominately white campus,” McCloud said, “I think that our administration, if not other administrations and colleges and universities across the United States, will start to take notice and maybe we should start giving people fair advantages and fair chances.”