Two riders longboard to support those with a mental illness 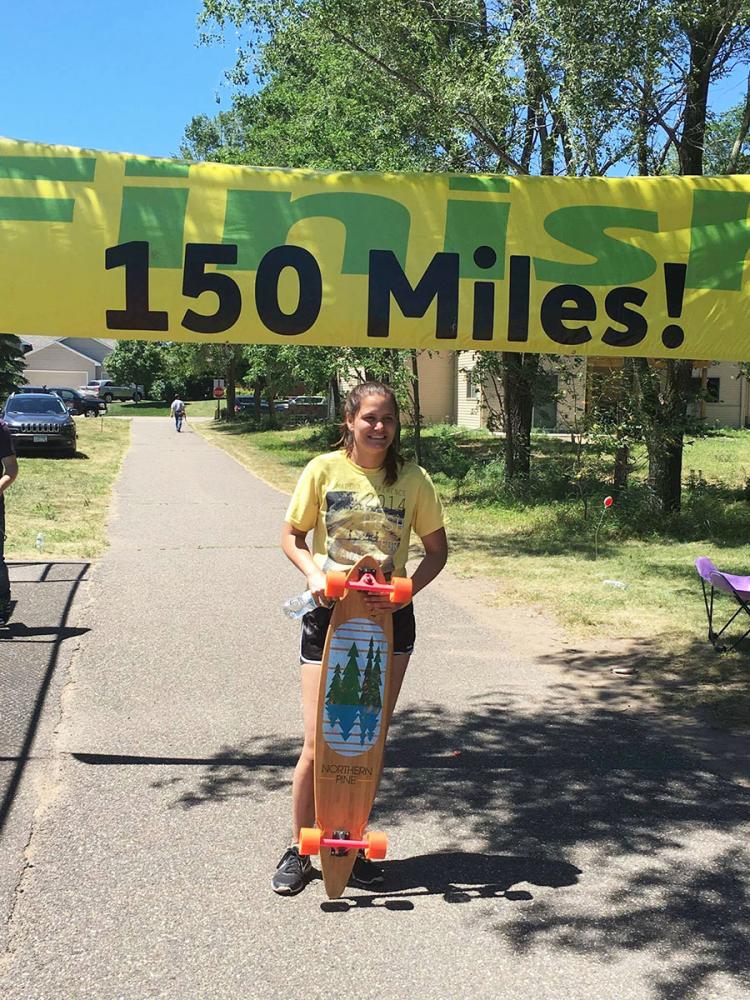 Josie Roll, a junior elementary and special education student, and Alexander Martin, a sophomore graphic communications student raise awareness for depression in teens by longboarding 150 miles from Duluth to Blain, Minnesota over the summer.

For Josie Roll, a junior studying elementary and special education, it never crossed her mind she would be able to longboard 150 miles.

Roll said she was given a longboard as a gift and would typically only ride three miles to the gas station near her house to get an ice pop before she was able to drive.

Now riding 150 miles from Duluth to Blaine, Minnesota is a special event Roll looks forward to every year.

What started as an idea to raise awareness for people suffering with depression, Push For Awareness grew rapidly in 2013 when Jake Bailey, Kyle Olson and Lucas Hess rode their longboards from Duluth to Blaine.

These three founders lost their close friend Dylan Wade to suicide and wanted to honor him by doing something Roll said Wade truly loved: longboarding.

Roll was good friends with the three founders and joined the riders two years ago. Although was only behind the scenes the first couple years of the event, she wanted to help in every way possible.

“Not all, but some kids who ride do have a mental illness or family members with mental illness who may have lost someone to suicide,” Roll said. “They hear about Push for Awareness and want to join and go on the ride. It’s cool because when we get to the hotels we stop at along the journey, they can all sit and just talk. It can get deep, but it is still a comfortable environment.”

As the years went on and the event became more popular, the number of riders increased. In the first year, 2013, the only riders were Bailey, Olson and Hess. But as they spread the word, created a Facebook page and gained the attention of a local news station, more people wanted to join and ride in the event.

Over this past summer, about 30 people ranging in ages from 15 to 27 rode from Duluth to Blaine supporting the cause.

Another rider who joined two years ago was Alexander Martin, a sophomore studying graphic communications. He may be known on campus as the UW-Eau Claire “Snapchat guy.”

Roll and Martin did not know each other prior to meeting at this event two years ago but now they bond over the cause. Martin heard about Push for Awareness and decided to join because he was friends with one of the founders’ younger brothers.

Push for Awareness is a three-day event with each day broken down into different lengths that participants are required to ride. 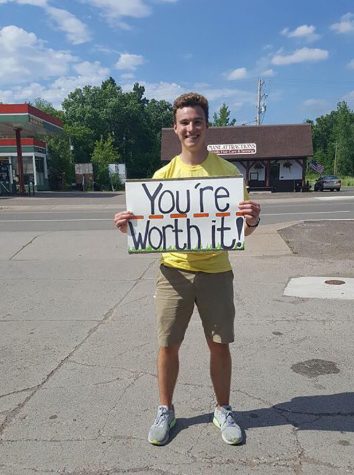 The group rides about 70 miles on the first day, 50 on the second and 30 on the third with support vans following them the entire way to cheer them on and be ready with first aid if necessary.

Sponsors have since wanted to promote and help the organization by not only donating money but also providing Gatorade and snacks at gas stations along the path they are riding.

Roll emphasized the fact they are a team — it is not a race by any means, and no one gets left behind.

“If someone got hurt or was tired, they could get in the support van. We like to use it as an analogy ‘to ask or lean on someone,’ and that was our support,” Roll said. “It was cool because you can make a connection to it and say this is some kid with depression and this is how they feel. They have to keep pushing.”

Roll said she guarantees if someone gets tired or bored and asks for help, the rest of the team will stop or slow down to encourage them to keep pushing. She said someone fell last year riding down a hill and everyone stopped to make sure he/she was okay.

The event starts on the MS 150 trail, a bike trail created to bring awareness for multiple sclerosis, but as the miles grow longer, the group has to ride on the side of the highway where the path is rocky and not made for longboarding.

“Over the two years I have been riding, I haven’t used any of the support vans and I have gone the whole way,” Martin said. “I have had the mindset that I’m going to push through this. Every push is for the people I am doing it for, and I’m just trying to fight for them by doing this. I haven’t myself experienced a mental illness, but it is not uncommon.”

Roll agreed and said she has felt very fatigued and tired during the ride, but she knows she wants to keep pushing because she will use it as a mental note for how people with depression may feel and what they go through.

“It’s not only a physical game, but it is a mental game hugely,” Martin said. “It is pretty much running a marathon.”

Roll said because this event takes place in the middle of summer, the weather can get very hot. During both Martin and Roll’s first year riding, the temperature was over 100 degrees. Although it was hot and exhausting, Roll said it was another reason for them to push and keep going. 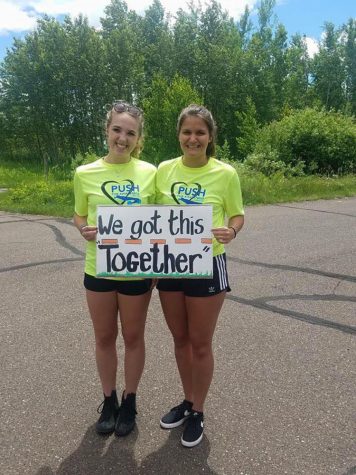 Being part of the National Guard, Roll said she is used to the endurance and is getting deployed in the winter. She said she is sad because she will have to miss next summer’s Push for Awareness event but she is trying to help as much as she can to promote the organization by finding sponsors and making posters.

This past summer the organization’s goal was to raise $15,000 but fell short and only raised $11,678. The proceeds go to the Suicide Awareness Voices of Education (SAVE), for counseling with young teens. Some of the money goes to the event itself for any costs such as hotel stay, food and water.

“We want and encourage people to donate because although this event is technically free, there are still hotel costs, gas and the essential needs that keep adding up, but we tell people to try to raise about $300 and we will help them if they need,” Roll said.

Martin said they always have a line of supporters cheering them on throughout the journey.

“For anyone feeling down or depressed, know you are not alone at all,” Martin said. “There are a lot of people out there who want to fight for you and want to do anything they can and will push themselves and break themselves down for you. That is what we are trying to do here, is to fight for others and help you fight for yourself.”

To find more information on Push for Awareness check out the organization’s Facebook page or Martin’s Youtube video to see what riding in the event is like.