Set construction, lighting, writing and directing all familiar to one student 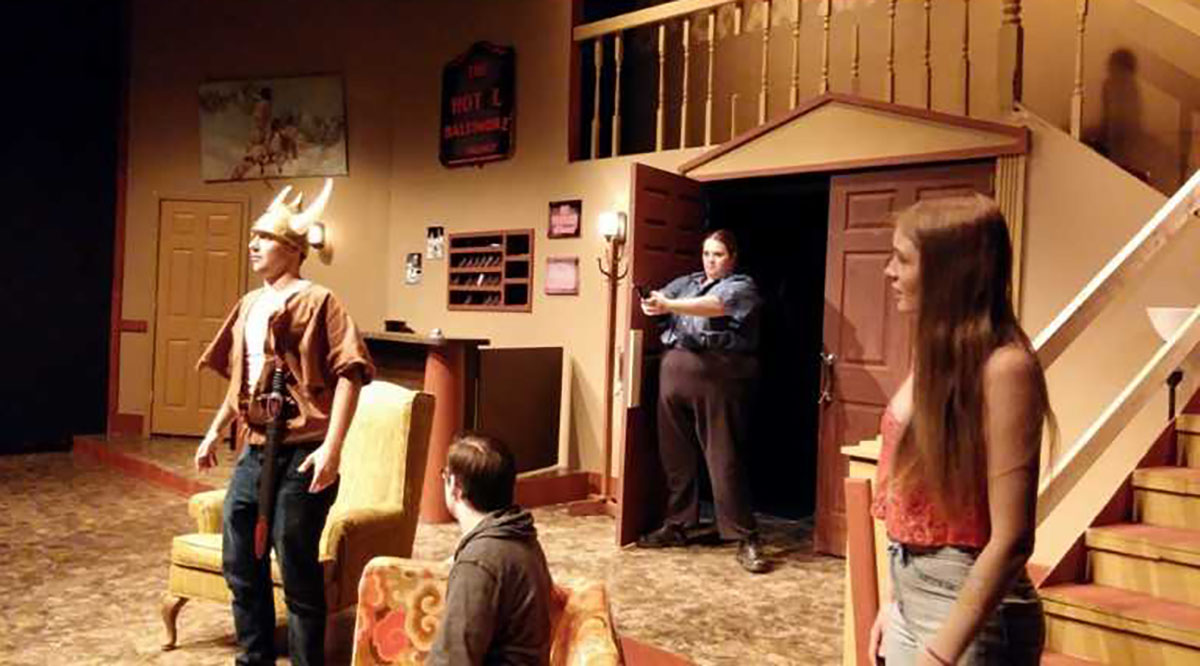 Matthew Hordyke directed several of his own plays in his hometown of Crystal Lake, Illinois, like An Unusual Evening, depicted here, about 11th or 12th-century vikings disturbing a man in a modern-day hotel.

Most people know of theater as a world of its own; for one UW-Eau Claire student, it serves as one that is important and special.

Matthew Hordye is a senior with a liberal arts major — which he’s taking in the direction of history and anthropology — and he said he has been involved with theater for six years.

This experience includes work all across the board, as Hordyke said he has worked on constructing set pieces, controlling the lighting in shows, operating the fly system, helping transition from scene to scene as a member of the stage crew and even writing his own plays. His preference, however, lies in directing.

“It’s fun to be able to create something and then see it done,” Hordyke said. “It’s fun to know people are enjoying what you’re doing.”

Hordyke said he’s always done creative things, from putting on shows with his toys when he was little to making videos with his cousin.

From Crystal Lake, Illinois, Hordyke said he has participated in theater since he was enrolled in high school. At first, he said, he gave acting a shot, but when that didn’t work out for him, he decided to stick with the show and help out behind the scenes.

When he began school at McHenry County College (Illinois), a community college in his hometown, he said he continued this work. Here, he was president of the drama club and had the freedom to write and direct his own short plays.

The favorite of his own works was one, entitled An Unusual Evening, about Vikings entering into a hotel and annoying the central character for the duration of the show.

He said he has also worked for Right-Center-Left Production Company, a non-profit theater company in Crystal Lake, and he’s going back this summer to help with the tech side of the production.

Two years later, he transferred to Eau Claire as a junior. He’s still writing pieces and participating in the small improv group, The Backwards Thinkers Society, but other than that he said he hasn’t been involved in the theater scene at this university.

“I haven’t really gotten into it; it’s my last year here …” Hordyke said. “Most of it is when I’m at home because that’s where I’m known — and that’s a big thing in theater too, is that you have to know people, especially in amateur theater. Locally, it’s very much ‘you need to know this person to do this.’”

Currently, Hordyke said he is working on a “light drama” radio show for Blugold Radio about pirates. He said he categorizes it this way because it isn’t funny enough to be called a comedy, but it isn’t serious enough to be considered a full-blown drama.

He said in general he prefers comedic subjects because they’re more flexible and fun.

“I don’t like writing serious things because when you mess it up, you really mess it up,” Hordyke said. “With a comedy, you can shrug it off as, ‘that was stupid.’”

Jay Geller, chair of theater, speech and journalism at McHenry, served as Hordyke’s teacher and his adviser for the drama club. The two worked on several shows together — by Geller’s count, six or seven.

Geller said he doesn’t think the drama club has put on a single show since Hordyke left because nobody has stepped up to put forth the same amount of time and effort.

Because Hordyke is “dedicated, talented … and passionate” Geller said he knows he has the capability to be successful in whatever he endeavors to do. He also said Hordyke’s dry sense of humor will benefit him in the world of theater, especially because he prefers comedy.

This summer, Hordyke said he hopes to start his own theater company in his hometown, where actors will perform Gilbert and Sullivan operettas, which he said are short comedic opera-style plays featuring “stupid, absurd and satirical” humor.

“A lot of the reason why I even want to start up the company to begin with is I wanted to show what I can do, and there’s not a lot of ways for me to do that by just kind of going through the normal route,” Hordyke said. “The normal route is kind of shifting me into doing lighting …”

While Hordyke said he’s not concerned about funding this project financially, he hopes to figure out the business side of running a theater company before he starts his own. Doing so includes looking into liability insurance, creating contracts for actors and figuring out budgeting.