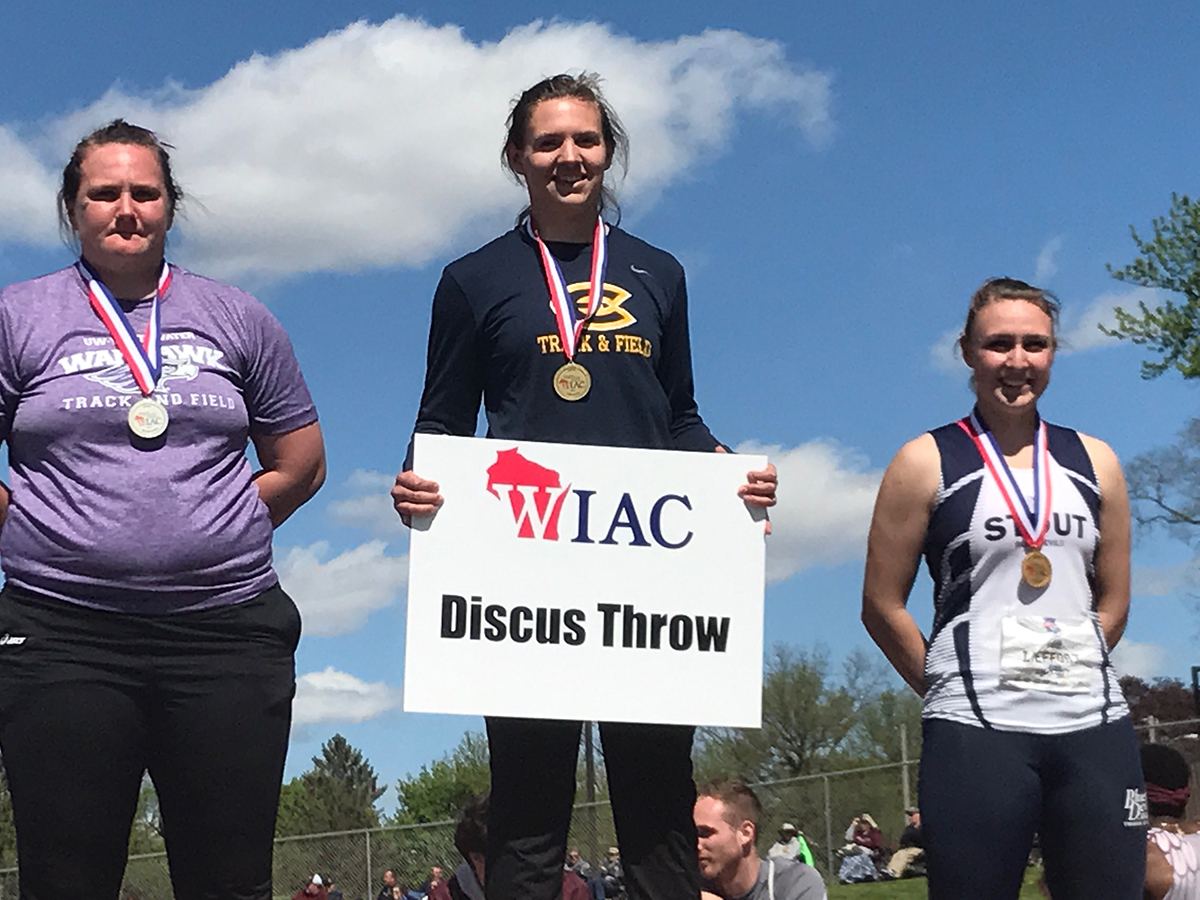 Erica Oawster, a sophomore on the track and field team, is currently ranked fifth in the nation for discus and doesn’t plan on stopping there.

While many students devote countless hours to Netflix originals or the latest video games, Erica Oawster prefers to spend her free time spinning in the ring.

That ring, of course, is the throwing ring.

She also happens to be ranked fifth in the nation for Division III discus.

Last weekend at the Wisconsin Intercollegiate Athletic Conference (WIAC) meet in Platteville, Oawster threw her lifetime personal record of 154’8’’, earning first place in the meet in addition to her current national ranking.

Head Coach Chip Schneider said he was not surprised by this feat.

“I think it was a matter of time before she threw that far,” Schneider said. “She puts a lot of time into what she’s doing.”

He said it is not rare for him to drive by the facility on weekends and see Oawster throwing there by herself.

Not only did she earn first in the meet and fifth nationwide, she beat the number one Division III discus thrower in the country.

UW-Whitewater’s Genny Stringer, a senior who currently holds the number one slot, came in second to Oawster’s throw by four inches.

This throw was no happy accident. Oawster has continuously built her momentum throughout the season and improved her previous personal record, which was thrown only two weeks prior by an impressive five feet.

Her performance, she said, has been steadily improving due to the way her throwing Coach Paul Conlin sets up the workouts.

“The weight training gets less and less (strenuous), so then we actually feel better,” Conlin said.

Due to this decrease in intensity in the weight room, Oawster said, the throwers are able to keep peaking throughout the season.

Having coached the Blugolds for 22 years, he is no stranger to experience. Conlin also helped lead several throwers to All-American and national champion titles.

He coached Alex Mess — a senior last year who excelled in the shotput and weight throw. Mess was the U.S. Track & Field and Cross Country Coaches Association (USTFCCCA) Midwest Region Field Athlete of the Year in 2016 as earning the All-American.

Then there’s Roger Steen, who won the 2015 NCAA Division III Indoor Track and Field National Championships in the shotput with a throw of 61’8.5”. He also placed 20th in the Olympic Trials in the summer of 2016 and plans to give it another shot for the upcoming Tokyo Olympics in 2020.

In addition to coaching all of the throwing events — discus, shotput, javelin and hammer — Conlin has a family and works a full-time job as a civil engineer; he is the Project Development Chief for the Wisconsin Department of Transportation.

“It’s extremely busy,” Conlin said. “But I enjoy working with the students of Eau Claire. I think we have had a good group of kids, continually, since I have got here.”

Oawster said he is very dedicated and sometimes has to take off work for meets.

In addition to having a decorated coaching staff, Oawster is extremely self-motivated.

Conlin said her drive propels her to be successful.

“Her biggest strength is confidence and her work ethic,” he said. “She’s doing all the right things in terms of both technique at practice and away from practice, the work in the weight room and mental preparation.”

Oawster said her parents are her biggest role models.

“They taught me a lot about working hard and that whatever I’m doing, just work with all my heart,” Oawster said.

Her goal now, she said, is to not only place in nationals but to be an All-American in discus.

For the USTFCCCA, the top 22 throwers in the nation qualify for nationals while the top eight are labeled all-American.

Last year, Oawster was just one spot away from making nationals in both outdoor and indoor track and field.

Conlin said being that close to victory — twice in a row — has only pushed her harder.

“I think that lit a fire into her to work her tail off during the off season and during this season,” he said. “She came to school last fall on a mission.”

This mission was accompanied by a few challenges during her time at Eau Claire, but she has risen above them seemingly without difficulty.

Oawster had foot surgery in the off season but has not let that slow her down; she bounced back and is no longer bothered by it.

As a student athlete, as well, she is faced with the task of balancing high commitments to both school and sports.

The most important thing, she said, is time management.

“It’s definitely very busy,” Oawster said. “I really have to keep organized and make sure I prioritize time for studying and time for practice.”

Oawster has not been a discus thrower forever. She actually played softball prior to her track and field career.

She was introduced to discus in the sixth grade when knee problems complicated playing softball, and a friend, who competed in discus collegiately, suggested she try it.

It came naturally, and she loved it, she said.

Nine years later, that passion has only intensified.

In addition to discus, Oawster throws the shotput as well, although she prefers and focuses on the former.

Nonetheless, she consistently places in meets and gives each throw — no matter what the implement — her all.

With a throw of 41 feet, 5 inches, Oawster earned eighth place in the shotput at the last meet in Platteville. She was the second Blugold to make the scoreboard behind junior JoHannah Theisen, who placed sixth with a throw of 43 feet.

Oawster hopes to keep building in both events between now and the end of May as nationals last weekend.

She has come a long way athletically and as an individual.

Conlin said he looks forward to seeing what she can accomplish in her future, in and out of sports.

“I think the things that make her a good athlete are the things that will provide success for her in the future,” he said. “Her hard work, her goal-setting, being goal-oriented, always having the end in mind when she starts things … She’s going to be a successful person in whatever she chooses to do.”

Oawster plans to go to graduate school for sports psychology with the hopes of coaching. Until then, she will be in the ring, finishing up her last two years of college doing what she loves.