The magic of inclusivity 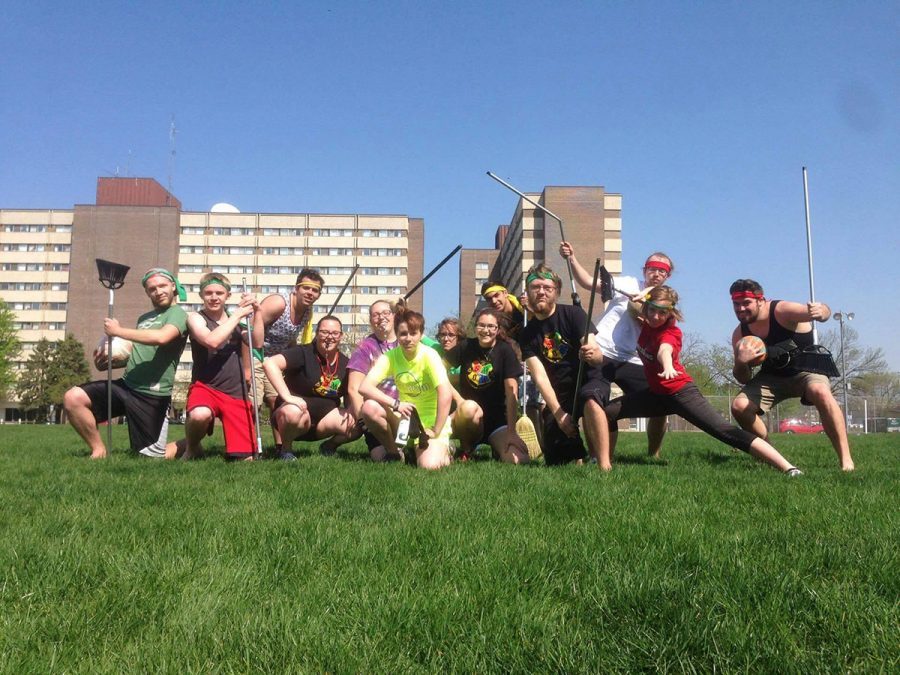 The Eau Claire Student Ministry of Magic poses for a photo after playing Quidditch. While the club has its basis in Harry Potter, the aim of the executive members is inclusivity and acceptance for all.

The UW-Eau Claire Student Ministry of Magic, while a relatively new club, is beginning to find its niche in the roster of student organizations on campus.

As the Student Ministry of Magic (SMOM) finishes its third year of official recognition as a club, the executive members are looking toward the future, rewriting the club’s constitution and reworking the long-term vision of the club.

“The reason we have this club is obviously the love of Harry Potter,” said Cass Sechtig, the club’s current Minister for Magic, “but we’ve also taken the club in a different direction and made it into a really inclusive and open place.”

The goal of the organization is not only to create more inclusivity within the club, but to broaden their outreach into the community, Sechtig said. With this goal in mind, they are considering adding an outreach executive position to help the club become more involved in the greater Eau Claire community.

“It started very small, it was a group of friends who loved Harry Potter, and it’s grown into something so much bigger,” Sechtig said. “There are so many things we’re involved in that I don’t think I would have ever seen in the beginning of this club.”

SMOM has become involved in a number of events in the surrounding Eau Claire community, including Relay for Life and the Blugold Mile. They hope to get involved in the Amazing Race next year. The organization also throws numerous Harry Potter-related events themselves.

This idea, that the club is representative of not only those who love Harry Potter, but anyone who wants a place to belong, is one the current executives hope carry on even after they graduate.

Ben Johnston, a senior linguistics major with a minor in women’s studies, said while the current mission statement of the club is one they don’t necessarily stand behind, they are in the process of rewriting it to better reflect the structure of the club.

“If we have a mission statement for our club, it’s to help people who normally wouldn’t feel welcome going out to other clubs find a community,” Johnston said. “We’re a baseline to try to get people in the door of the university.”

Johnston is the scribe, or secretary, of the club. His role typically includes managing emails, forming committees and taking notes, but right now his main focus is going over the club’s constitution “with a fine-tooth comb.”

Sechtig, a comprehensive mathematics education student, was elected vice president of the club last fall. She was left with only a few weeks to prepare for SMOM’s annual Yule Ball when the previous minister stepped down after fall semester.

“It was a little stressful becoming president halfway through the year because we had Yule Ball two weeks into the semester,” Sechtig said. “That transition period was very short and sudden, but I also had the entire club backing me and supporting me.”

The Yule Ball is SMOM’s largest event. Around 350 people attended this year, Sechtig said, a number which has been increasing steadily since the first Yule Ball three years ago.

This was the first year SMOM partnered with Eau Claire Pride in throwing the Yule Ball. It was the first ever LGBTQIA+-friendly dance in Eau Claire history, Sechtig said. SMOM hopes to continue partnering with Pride in other events.

Two To Tango offered free gender-neutral dance lessons in preparation for the ball as well — they used phrases such as “lead” or “follow” instead of the traditional male-female terminology.

Pride and SMOM work well together because SMOM, somewhat similarly to Pride, hopes to provide a place where students from a variety of backgrounds and interests can find common ground and a place to belong, Sechtig said.

Johnston said while Harry Potter fans are by no means a marginalized group, the club is a haven for “nerds” of all kinds.

Sechtig said while the role of president was one she was pushed into, it has taught her leadership skills and has given her a greater amount of confidence.

“This club really has helped me become a leader, just because I have that support system and it’s helped me gain a lot more confidence in myself,” she said. “Now I have those skills, and the comfort level to sit and talk to people and do interviews, which has had an extremely positive impact on my life.”

Johnston said the club is “an introvert self-help group.”

While Sechtig has never read the Harry Potter books, she said this speaks to the “inclusivity factor” of the club itself. One doesn’t need to know everything about Harry Potter to find a place of belonging within the club, or even to take on a leadership position.

“Our meetings generally aren’t as hardcore Harry Potter as some people might think,” Jacob Cvikota, the Headmaster, or vice-president, said. “It’s kind of just a loose association of nerds.”

Cvikota, a sophomore geology major, said he has met the majority of his friends through SMOM.

The leisurely structure of the club helps social bonds to form and last, Sechtig said, which is one of the primary goals of the organization.

“Ultimately this club has had such a positive impact on my time at this university,” Sechtig said. “One of the most beneficial parts of my education has been having the support system that this club created for me.”

The social aspect is one of the most important parts of the club, Johnston said, but the enduring ideology behind Harry Potter is what ties the goals of the organization together.

“Harry Potter sets up a lot of very interesting and complex issues,” Johnston said. “The way it interacts with my daily life, in the face of discrimination, racism … is very interesting to me as I get older. It’s very important to me from that activism perspective.”

Johnston said the “escapism” of Harry Potter might be a big factor in the role the club has played in creating a welcoming environment for students of all kinds.

“A lot of students turn to video games, books, movies, to get away from that kind of hectic, chaotic life that is being a student here,” Johnston said. “Having that fantasy world lets us escape. I think that’s why our club turned into a very social and open space, because people need a break. And Harry Potter is a good doorway for that.”

Students who are interested in joining the Student Ministry of Magic are free to walk into a meeting or message any of the executives on Facebook, Sechtig said. Meetings are held at 7 p.m. on Thursdays in Hibbard 304.