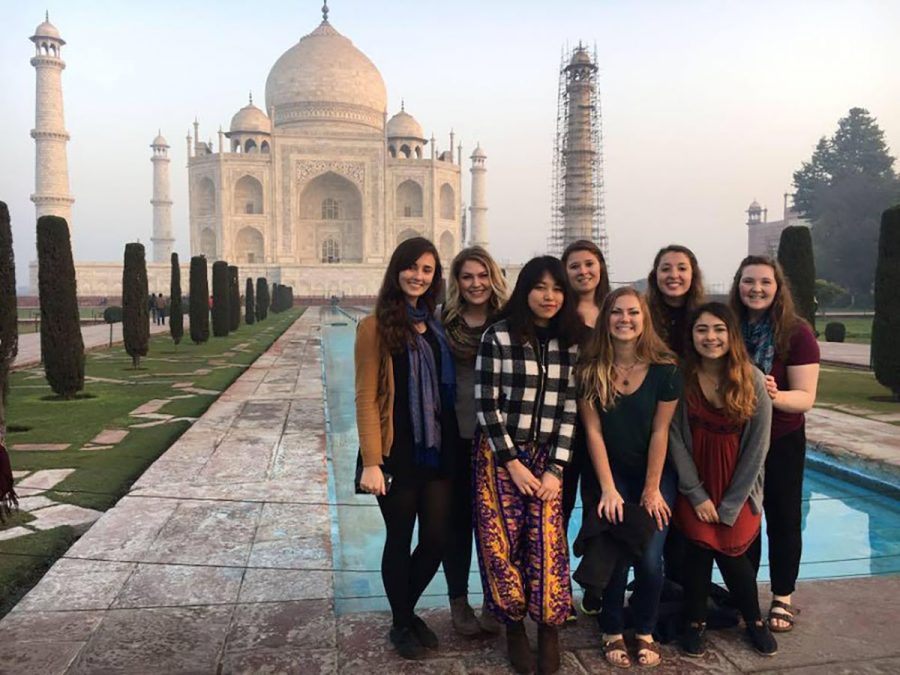 Course members stand in front of the Taj Mahal. The Blugold women’s studies students were studying in India over winterim for just shy of three weeks. After listening to lectures, participating in discussion and working in fieldwork projects, the students presented their findings to one another.

UW-Eau Claire students and faculty studied intersectionality and transnational feminism in Delhi, India, over this past winterim. Bustling streets, lectures from esteemed speakers and highly contrasting experiences generated an awareness of their presence within the surrounding culture.

The course was a three-week long immersion through the University of Delhi at Miranda House College and the Women’s Studies Development Centre at Delhi University. Associate professor of geography Ari Anand, and professor Cathy Rex of the English department led the group of eight. Both of whom were original to the class, and offered different areas of expertise. Anand lent knowledge about the history and culture, while Rex worked with theoretical material of intersectional feminism.

“It helped me increase my cultural sensitivity. It helps people to realize their ethnocentrism and break out of that shell,” said Shannon Dixon, a sophomore philosophy and Spanish student. “From what I experienced, it was eye-opening. I tried to soak in as much as I could, or at least I hope I did.”

Dixon said cultural differences were stark the first evening in Delhi, when the group stood at a bus stop during rush hour. It’s uncommon for women in Delhi to stand still while in public, and the streets were raucous with people driving home from work. The speed and buzz of life around them highlighted their stillness, drawing attention, Dixon said.

“We were foreign women standing there during rush hour,” she said. “We probably just oozed inconfidence.”

Throughout the first week, the group learned from distinguished lecturers such as advisors to the Indian Supreme Court, Feminist Mary Jo Neitz, lawyers and an abortion clinic employee.

Students from the Miranda House College were awestruck listening to distinguished speakers in an intimate setting of several dozen, said Anand, and equally so were the American students. The breadth of knowledge from the first week of lectures, Dixon said, launched her into the following experiences.

Delhi, Anand said, is known for being a hyper-masculine space.

“It’s not that there aren’t women (in public),” he said, “but women know how to negotiate public space.” The group took notice of how situations differed, and equally so the diverse methods of dealing with them.

When the group took the metro and sat in the women’s-only passenger car, a trend that can be found in cities around the world, they teased apart the situation. The car shielded and protected women passengers, Rex said, but reinforced societal expectations, too.

Being from Mumbai, Anand was able to translate moments that may have been culturally elusive. Class members checked in with Anand about their actions in public, saying “Look, if you think we’re doing something, tell us.”

“Pay attention to cultural cues,” Anand said he replied. Understanding what to do comes with time and experience, he told them.

A few days later, they set off for what is known as the “golden triangle tour,” traveling from Delhi to Jaipur and ending at Agra, all of which lie six hours apart from one another. One touring morning, they rose early and saw the Taj Mahal at sunrise, dusted yellow and pink with the morning light.

Just outside of Agra, the group was led by a local professor through Fatehpur Sikri, a medieval fort.

Following the tour, they were invited to the professor’s house, where his family had lived for some 300 years. They were introduced to his extended family, ate traditional Indian food and took in a vista of the city from the roof.

The benefit of learning, mixed with an authentic experience, allowed the group to be more connected with the culture, Rex said.

“We were always aware of our outsider-ness and our difference and privilege,” she said. “We had to split tourism with more authentic experiences.”

One of the meals took place at Sheroes Hangout Cafe, an establishment run entirely by and for survivors of acid attacks. It’s a non-profit restaurant, intended to raise awareness of acid attack victims, as well as give strength to their own employees, according to the CNN article “Cafe empowers acid attack survivors,” published in November, 2016 as a feature of the cafe’s work.

Being at the cafe was a touching experience, reminding her of the goodness to be found in humanity, Dixon said.

Upon returning to the Miranda guest house in Delhi, students diverged and worked on one of four fieldwork projects with local anti-poverty NGO’s: Urban slums, women in media, masculinity studies and abortion clinics. The final part of the class focused on presenting the information they had garnered to one another and writing reflection papers.

“All the young women who went will bring the experience back to Eau Claire in really significant, meaningful ways,” Rex said. “That intersectionality goes through every discipline.”

The course will likely take place again winterim of 2019. Rex and Anand are hopeful to welcome students from the Miranda House to Eau Claire sometime next year.