Dumbfounded: How a Blugold won the entire showcase on ‘The Price is Right’ 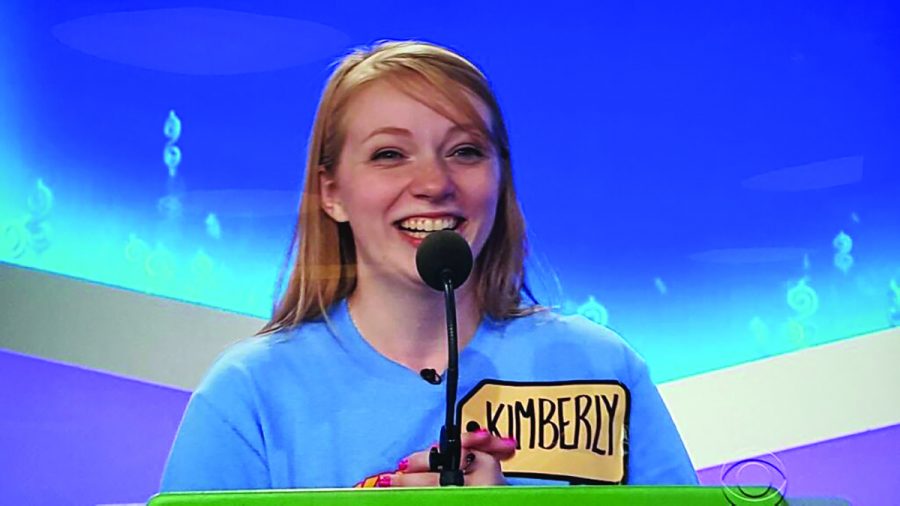 Kimmy Neve won the entire showcase of “The Price is Right” October 20, 2016, but was contractually unable to tell any of her friends or family of her win until the episode aired last Wednesday.

Along with the usual dose of cough medicine and spending the day in bed, senior UW-Eau Claire nursing student Kimmy Neve’s sick days growing up typically also included watching “The Price Is Right” at 10 a.m. sharp.

“I’ve been watching the show every sick day since I was in kindergarten, basically,” Neve said. “We’d just be sick in bed and be like ‘That lady messed up. She should’ve said $3.’”

But back then, Neve never would’ve believed she’d go on to not only be one of the show’s contestants, but also to win $62,472 in prizes — the entire showcase. She can still hardly believe it, the idea for the trip to California instigated by her dad’s business conference in the state.

Because the conference was conveniently located at a hotel only a block from Disneyland and her brother’s boyfriend gets free flights as a flight attendant, Neve and her brother, self-professed “Disney freaks,” couldn’t resist the opportunity.

As her family was planning their trip, Neve said her mom, who has always loved “The Price is Right,” asked if they could get tickets to the show for while they were there. Neve, who really only cared about going to Disneyland, said “sure.”

Bright and early the morning of Oct. 20, 2016, Neve, her mom, dad and brother set out for “The Price is Right” after a late night at Disneyland.

Although they arrived at the studio at about 10 a.m., Neve said they didn’t get inside until around 3 p.m., spending the day waiting in long lines, only broken up by a photo and a 30-second interview.

By the time the interview rolled around at the end of a long day, Neve was exhausted. As producers were encouraging her to smile and to be energetic, while refraining from becoming “too overly obnoxious” if she wanted to go on stage, she knew what she had to do.

“I was dead tired, because I was like ‘I’m here for Disneyland,’” Neve said with a laugh. “So, I took an energy drink.”

What happened after getting called onstage, Neve said, is a surreal blur from which she walked away having won two cars, a five-day trip to Charlotte, North Carolina for two, a NASCAR race experience package, a computer, a gaming set, a car stereo system, a yearlong supply of juice, SpeedStick deodorant, a waffle iron, games, a desk and a chair.

“Everything was just happening at a whirlwind,” Neve said. “It was only 15 minutes tops that this all happened. I did not know how to react. I have people offstage telling me that when you see your prizes, we want an over-the-top reaction, so I was trying to do that and try not to ‘double chin’ too much.”

While other want-to-be contestants spend months upon months intensely preparing by studying the costs of vacations, cars and other various random items, Neve said she and her family didn’t do much preparing for the show besides buying matching shirts, and all those sick days over the years.

Though it was she who got called onstage, Neve said she didn’t get through the show and win it without help from her family, who held up hands, mouthed prices and did sign language during the show.

Afterwards, surrounded by producers, fellow prize-recipients and binding contracts swearing her to secrecy until the show’s airdate, January 18, Neve was in shock.

“I was just staring at the carpet and the producers came up to me and they were like ‘Honey, are you O.K.?’ and I was like ‘Yeah, I’m fine. I’m fine,’” she said. “Afterwards, I met up with my family and we’re all too dumbfounded to eat … We just wanted to go back to the hotel.”

Although Neve had trouble believing her win, constantly asking her family for days after if it really happened, for those who knew Neve, it wasn’t all that surprising.

Frank Watkins, director of Women’s Concert Chorale and director of choral studies said he was originally shocked, but later realized it wasn’t all that startling.

“I couldn’t believe it. It was shocking … Who goes and wins ‘The Price is Right’?” Watkins said. “But if I were to think that it would be anyone, it would be Kimmy … she’s just that kind of person.”

Neve broke the news to Watkins in a long letter that ended with his Christmas present — a promise that she would use some of her winnings to give a sizable donation to WOCO.

When she had emailed Watkins about having to miss rehearsal because of her vacation to California back in October, Neve had jokingly told him that if she “won big,” she would make a donation. Little did either of them realize it would become a reality.

“She loves WOCO, she loves choir, she loves music,” Watkins said. “It shows the kind of person she is, that she wants to give back to what she loves.”

Dani Braun, a junior music education student who has been in WOCO with Neve for the last three years, said she also was not surprised by Neve’s win, despite initial disbelief.

“Out of anybody, I would definitely say it would be Kimmy, with that cheese smile,” Braun said with a laugh. “I can’t think of anybody more deserving … she always has a super positive attitude and she’s so great.”

But unlike Watkins, Braun didn’t find out until the show was aired last Wednesday, in the midst of Cabaret rehearsals.

Neve had been asking Braun and Sarah Joosten, student directors of WOCO’s set this year, for days if they could take a break to watch the show. But since she couldn’t explain she actually won the entire showcase, they weren’t sure they had the time.

As 10 a.m. Wednesday rolled around, Neve decided to take matters into her own hands; to at least tell the girls she’d won and “boost morale” since she knew they weren’t going to watch it.

Standing from a chair, Neve told the girls she won the entire show — but no one believed it.

But Neve insisted — so the girls began their test, asking her what she won, what the studio was like, what Drew Carey was like. She didn’t flinch, telling them of all she won, and adding she even made a shout out to WOCO while spinning the wheel, which was cut out of the aired show.

“I didn’t think she would’ve done a shout out and I was like ‘No you didn’t. You did not think of us in the midst of that craziness,’ but she did,” Braun said. “Only Kimmy would remember to give a shout out to her WOCO girls.”

Finally, they believed her and insisted they watch it. Since they were in a rehearsal room and didn’t have access to a TV, they gathered around three phones and livestreamed the show, using the commercial breaks to continue rehearsing.

“(It was) 100 percent worth the diversion,” she said. “It made everyone’s day … we were all super stressed and tired, and so it was a great, unexpected way to kind of have a break.”

Looking back, Neve is glad she took a bit of a deviation from the main priority of the trip — Disneyland — to take a break.

“I love me some Disney, but it was one of those once in a lifetime moments, while with Disneyland it’s fun every time I go,” Neve said. “But this, I’m going to tell my grandkids. I’m going to milk it for all it’s worth.”