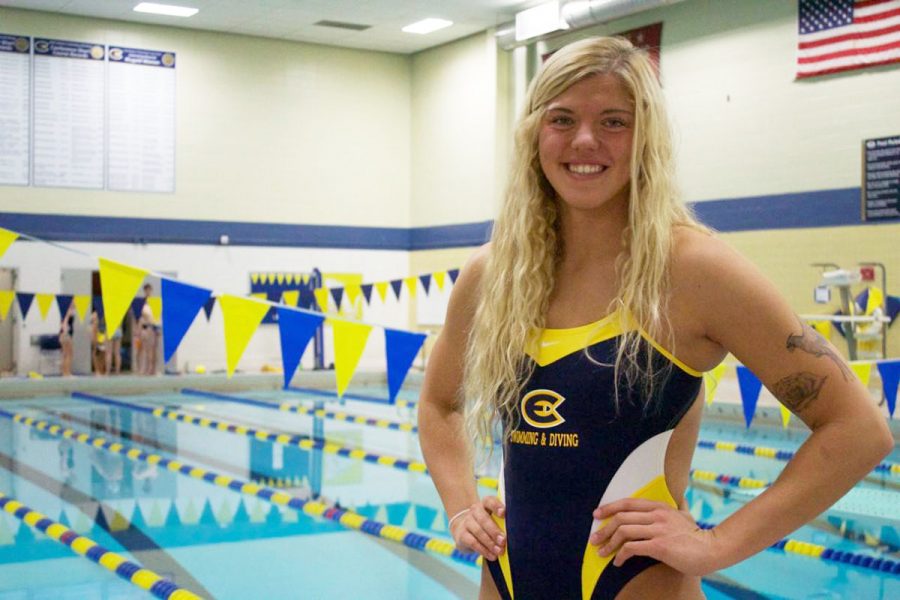 A photo of Senczyszyn taken for her entry into the Blugold Hall of Fame.

The moment national record holder Sam Senczyszyn realized she had a knack for swimming was at her first junior national swim meet.

The country-wide meet was open to participants under 18. At the age of 12, Senczyszyn and one other swimmer were the youngest among the 1,800 participants. In anticipation of the meet, she had been happy to go to Florida; however regarding the age difference in her competitors was a point of realization.

Eight years later, when Senczyszyn set the new National Collegiate Athletic Association (NCAA) Division III record in the 200-yard breaststroke with a time of two minutes, 12.2 seconds, her Eau Claire teammates were cheering her on from the side of the pool.

Senczyszyn said being on the team makes the difference at the competitions.

“I feel like I can be most like myself when I’m around the team,” she said. “We’re all looking out for the best for one another.”

She also helped set a Blugold record in the 400-yard freestyle relay  that weekend.

Jessica Short, who has swam with Sam since they were 11, said watching Senczyszyn breaking records at the conference was an experience the whole team cherished.

“At that level, most swimmers are in their own world, but being such a team’s team that we are, I think we were the only team back there cheering,” Short said. “She did so well. We have a great picture of all of us behind the blocks, just screaming our hearts out for her. That was a really cool thing to watch.”

A current sophomore studying special education, Senczyszyn chose UW-Eau Claire for a number of reasons. Swimming wasn’t one of them.

Following her senior year of high school swim season, Senczyszyn decided she didn’t want to continue swimming and she was done with the sport. She was committed to swim for the University of Arizona, a Division I school, but turned down the offer and chose a smaller school closer to home with a degree program she liked: Eau  Claire.

Nick Hora, the women’s swimming and diving team assistant coach, participated in the Ozaukee Aquatics club team with Senczyszyn and Short throughout their adolescence.

Senczyszyn contacted Hora to talk about Eau Claire after deciding not to go to Arizona. He said she was nervous, having given up a full-ride scholarship, but she felt Eau Claire was the right choice.

If you ever want to swim again, he told her, you would find your niche.

At the end of her five-month break, pictures and social media posts of friends participating in the junior nationals meet made Senczyszyn return to the sport.

“I was like ‘oh my gosh I miss it,’” Senczyszyn said. “The next week, I was back in the pool and I haven’t stopped since.”

She contacted head coach Annie Ryder and assistant coach Nick Hora, who talked to her about the team.

Short followed a similar pattern as Senczyszyn a few months later, leaving Texas Christian University, where she swam in the D1 program, to be closer to home at Eau Claire. Having swam with Senczyszyn since she was 11, she said seeing a familiar face on the team made the difference.

“Knowing someone coming in made the transition way easier,” Short said. “I would call her my best friend.”

Senczyszyn manages a training schedule with practices six days a week, ranging from time in the pool to running and yoga. Most Saturdays, the team piles into busses to head to competitions.

While many, family included, told Senczyszyn that her skills would not improve at a D3 school, she went on to shatter records.

“Her coming here, I think, was one of the best decisions she made for herself,” Hora said. “I think she needed swimming in her life just because it’s who she is and she’s so talented, but she didn’t need the pressure.”

Hora said he’s seen through coaching that if he provides Senczyszyn with the tools she requires to improve, she dives in.

Individually, she set a goal of beating the national record in the 100 breaststroke. She additionally wants to graduate having won conference as a women’s team.

While her commitment time in high school included 5:30 a.m. practices, she said the team and practices didn’t match the caliber of her current training regimen.

“It was more like we were jealous of one another for doing well in high school,”  Senczyszyn said, “where in college you want your teammates to do so well and you just want the best for them and when they swim well, you swim well and everyone’s happy.”

Still, she said, school remains her priority. The sport has taught her how to manage time, moving from morning practices to two-hour blocks of working on homework to classes.

Short said she’s seen Senczyszyn’s work ethic over the years in how she trains in the pool, encourages other teammates to maintain their perseverance and continues practicing, day-in and day-out.

“If anyone deserves the success that she’s getting,” Short said, “it’s her.”