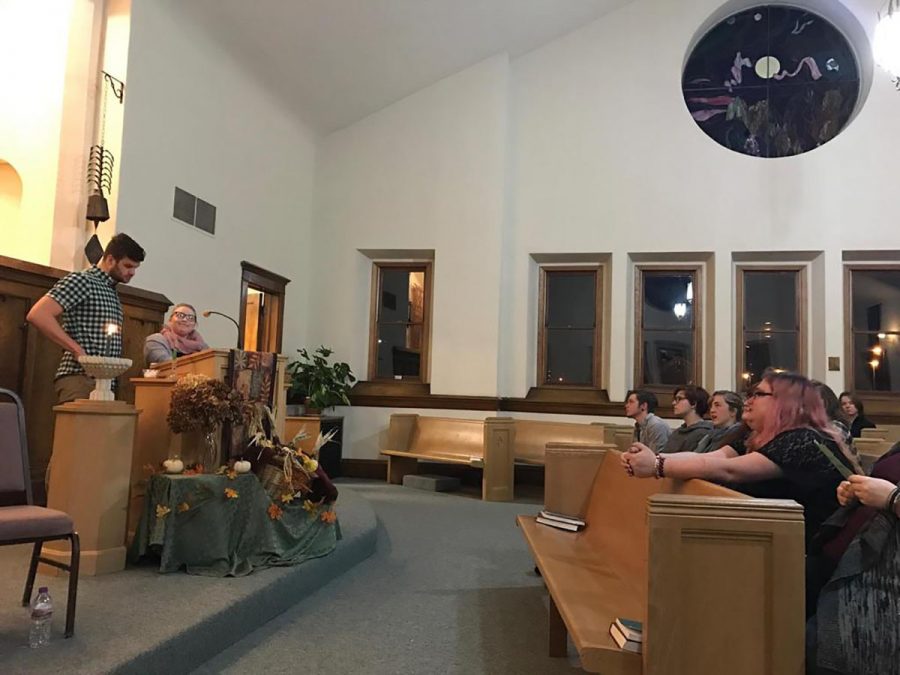 For the past 17 years the Transgender Day of Remembrance has been recognized annually on Nov. 20, and for the second year in a row, Eau Claire took part in recognizing the day and specifically, honoring the lives lost this past year to anti-trans violence.

The event was held at Unitarian Universalist (UU) church which organizer of the event Alex DeLakis said has been an open and affirming place for the LGBTQ public in the area for a long time.

DeLakis, a senior social work student along with fifth year social work student, Devin Dawson, played a major role in putting together the event as well as bringing awareness to and advocating for the Lesbian, Gay, Bisexual, Transgender, Queer (or Questioning) community in their daily lives both on and off campus during their time in Eau Claire.

The event this year held more meaning than it has in the past, DeLakis explained.

This year organizers tried to complicate the narrative to acknowledge the larger systems of oppression involved with the negative association that’s often coupled with the transgender community.

“This holistic view helps people understand the relationship these systems of oppression have,” DeLakis said. “And how, when stacked on top of each other, they leave people even more vulnerable,” DeLakis said.

DeLakis added that unlike the high energy felt at National Coming Out Day, this event would be much more somber.

The event opened with a panel of individuals who are working for transgender inclusion. Among the panel, Dawson, who identifies with “they” pronouns, was asked to be a panelist to talk about activism through their experience as a nonbinary person. Dawson also took part in a similar panel at an event held at UW-Stout.

Following the panel, a non-denominational service was held to honor the lost trans lives.

As well as being one of the main organizers of the event, DeLakis is also a co-facilitator for Q2, an LGBTQA youth group in the Chippewa Valley. Working with the local organization that held National Coming Out Day at The Plus, Q2 is an all gender clothing swap and youth based group that had events and activities in the past. He also works with G safe, a statewide organization that works to advocate for high school and middle school LGBTQ students specifically.

Additionally, DeLakis is the unofficial leader of the resource pillar guide of the safe space coalition in the Chippewa Valley where he is working to create a comprehensive resource guide of LGBTQ friendly service providers in the area, focusing on highlighting mental health and social service providers for queer identifying individuals so they can receive nondiscriminatory care.

“I have a huge passion for mental health and I’d like to ideally pursue case management,” DeLakis said.

He said 2016 has been the deadliest year on record for transgender individuals and because of this, he wishes to advocate even more for change in community policies as well as the public discourse and rhetoric to encourage others to better understand how we all have a responsibility in defeating transphobia.

He said simply having the skill to ask someone their preferred pronouns is a small step people can take to being more supportive of those in the community.

“Growing up there was no LGBTQ visibility and not many resources available to me, so being able to highlight services provided in the area is a sort of personal closure for me,” DeLakis said.

DeLakis read aloud 24 names Monday evening at the front podium. That number doesn’t include the lives lost this past year to suicides or from those who died but did not identify as trans at the time.

“People have the idea in their heads that since same sex marriage was legalized we don’t have anything to fight for anymore,” DeLakis said. “LGBTQ youth still make up 40 percent of the homeless population, and there are still so many ways that the LGBTQ population isn’t always recognized.”

While DeLakis exerts his time and energy advocating for the LGBTQ community mostly off campus, Dawson has spent their time working closely with campus organizations and the LGBTQ Advisory Board, which works directly with Chancellor James C. Schmidt to provide safe spaces to UW- Eau Claire.

They are also the president of PRIDE, a 4th year intern for the Women’s and LGBTQ campus resource center and a coordinator for Q’nnect, a connection and mentorship program for LBGTQIA individuals.

This year though, Dawson has realized that college campuses can unintentionally become bubbles, and they’re working to urge individuals to break out of the comfort zones those bubbles create to push for more change within a larger scope.

“That’s the biggest flaw with these safe spaces,” they said. “The idea of feeling comfortable and having a place to go is great, but being uncomfortable and facing the people who challenge our point of view is where we grow.”

In light of the recent election outcome, Dawson said the LGBTQ community will be forced to acknowledge others who don’t see eye to eye with them now more than ever.

“My life has changed a lot in the last week,” they said. “I have always disliked children because they reminded me of the tormented childhood I had, but right now I’m recognizing that the LGBTQ youth need more attention than ever and my talents can be used in that area for the better.”

Dawson grew up in a home where they were told that being who they were was a sin, their privacy was constantly breached and were told they, “just needed to change.”

Learning from this and especially following recent events, Dawson understands that resilience is what brings people and communities together.

“The LGBTQ community has proven to perform best in the darkest of times,” they said. “What made me get up the next day (following the election) was the fact that if I lost hope, who would be the one fighting?”