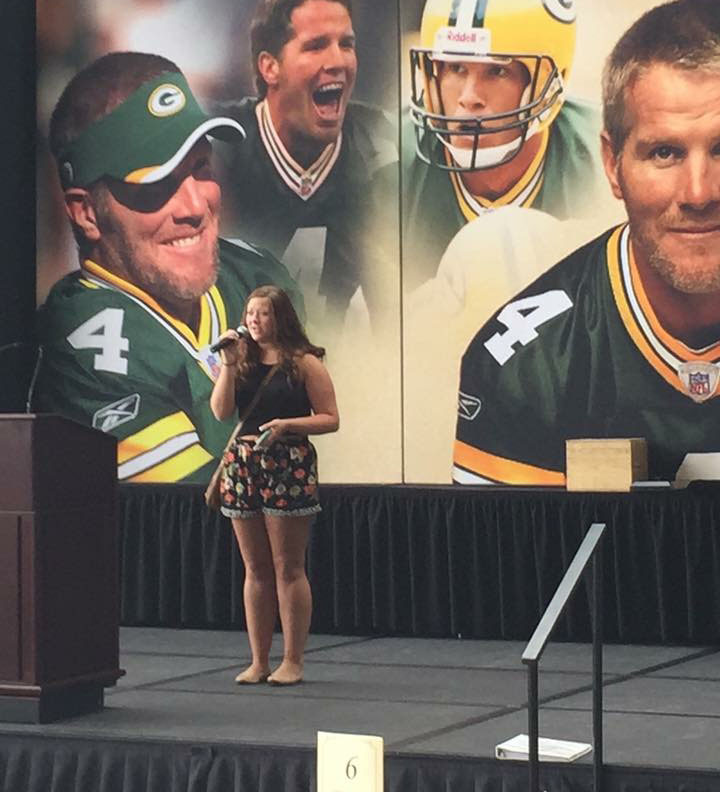 At the induction ceremonies, Forrest’s typical audience is between 1,200-1,300 people. Shown here is the singer conducting a soundcheck prior to her actual performance. (submitted)

Singing along to the radio in the car? Typical. Singing the national anthem at Brett Favre’s Hall of Fame induction? Unbelievable.

UW-Eau Claire sophomore Maddie Forrest has a passion for music that is present throughout her life. As a member of the all-female a cappella group Audacious and the university’s concert choir, Forrest sees music as an integral part of her life even though she’s pursuing a degree in public relations.

Forrest said she has been interested in music since fifth grade when she participated in a requisite music class.

“Everyone had to take music in elementary school – that was when everyone learned how to play a recorder,” Forrest said.  “I actually started singing at my church with the organist. She started giving me voice lessons when I was in sixth grade and we continued that until I started high school.”

As she got older, Forrest found more and more ways to get involved with music, including the Wisconsin State Honor Choir and school musicals.

At 16, Forrest was given an opportunity bigger than any she had been offered before: She was chosen to sing the national anthem for the Green Bay Packers Hall of Fame Induction Banquet.

“When he (the Bayport High School Choir Director) described it to us, he said ‘there’s this small banquet that’s at Lambeau. I think it’s in the summer. If you want you can email this person and go from there,” Forrest said.

It wasn’t until her audition that she found out her audience would be around 1,300 people.

Denny Tattum, vice president of the Green Bay Packers Hall of Fame was part of the team that chose Forrest as their current induction banquet singer.

Five years ago, the Hall of Fame was looking for an act and Tattum was hoping to find a local youth to fill the position. He said he reached out to schools in the area and had heard back from Forrest in return.

At the time, Forrest had been unsure about going in for an audition. In fact, she said if her parents hadn’t convinced her to go, she would have never had this opportunity.

She sang in a private stadium suite for a small group of people she had never met before. Tattum said the group knew they wanted her right away, but for more than her ability to sing.

“We chose her not only for her talent, but because she had also been recognized as a good classmate by her fellow classmates and a good student by her teachers,” Tattum said. “She walked in with a personality of someone you can tell you want to get to know.”

Forrest said despite her first Hall of Fame performance being the biggest crowd she had sang for up to that point, a lot of the nerves melted away during her performance. Forrest said she realized in order to do her best, she had to be confident in herself regardless of the number of people watching.

Two years later, Brett Favre was inducted into the Packers Hall of Fame and Forrest’s audience was now roughly a staggering 70,000 people.

Many noticed her ability to sing in front of this sizable crowd unfazed, including Tattum.

“Maddie has the ability to sing and perform in front of over 1,300 people with one sole thing in mind,” Tattum said. “And the audience knows they’re going to hear something special and meaningful. When she sings, it comes from the heart.”

After this specific performance, Donald Driver asked her if she had been nervous about singing in front of so many people. When she said no, he said “That’s my girl,” which is a moment Forrest said has stuck with her.

Other than being complimented by NFL players, Forrest said one of the best things about performing at these ceremonies is creating unique connections. Other than all the new people she gets to talk with, she said her Hall of Fame performances have changed her view of the Packers.

“I think the biggest things for me was becoming more connected to this organization as a whole,” Forrest said. “Before this, I didn’t really think of football as a huge thing, but now after seeing the players interact with each other and seeing that it really is kind of a family, it’s different. It’s really cool to see.”

Tattum said he figured Forrest would be done after she graduated high school, so he sent her an email asking for suggestions for someone to replace her. He said Forrest responded by saying she would like to stick around if they would still have her. This summer will be Forrest’s fifth performance at a Hall of Fame induction ceremony.

Forrest said she would like to continue singing at the annual Hall of Fame inductions at least until she graduates from Eau Claire. She said she believes that will be her time to step down and hand the honor off to someone else.

To Forrest, music is important because it can lead to a different understanding of other people and cultures worldwide.

“Music has always been said to be universal language and I think that’s really special,” Forrest said. “Especially with how our world is changing and growing constantly, it’s something anyone can connect to regardless of their background. Anyone can relate to it and it’s something that people can have fun with.”

After college, Forrest said her biggest hope is to find a way to keep music in her life. She said she would like to find an outlet wherever she lives by joining semi-professional performance groups and continuing to build connections with others and the world through music.