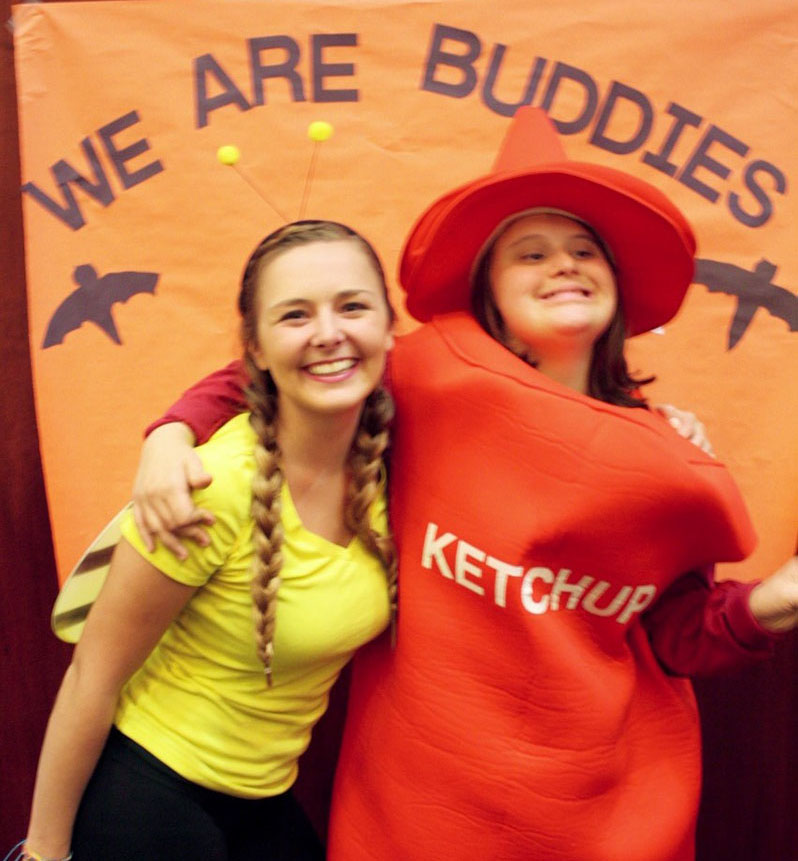 When she thinks back to the moment that continues to motivate her to stay involved with Best Buddies, Hannah Seneczko narrows it down to the moment Anthony Shriver, the founder of the organization himself, said he wished it didn’t exist.

“It should just be natural and we should all just want to be friends with everybody,” Seneczko, a senior psychology student, said. “That moment has always stuck with me since I’ve been in Best Buddies.”

As an international nonprofit organization, Best Buddies aims to promote inclusivity of individuals who have intellectual and developmental disabilities by fostering one-to-one friendships, as well as creating employment, volunteering and leadership development opportunities for both those with disabilities and those without. Since its inception in 1989, the organization has “positively impacted” over 900,000 individuals with and without disabilities all over the globe and nearly 31,920 in Wisconsin, according to their website.

UW-Eau Claire’s chapter of Best Buddies is one of the organization’s many college campus offshoots across the country, including eight in the state of Wisconsin. Besides a chapter at Eau Claire’s DeLong Middle School, the UW-Eau Claire chapter is the only one in western Wisconsin.

For Annie Behnke, co-president of Eau Claire’s chapter and senior special education student, her passion for working with individuals with disabilities originally sparked in high school when she was part of an organization similar to Best Buddies, she said.

When she saw Best Buddies at Blu’s Organization Bash (BOB) freshman year, she said she knew she had to join immediately.

“I just have a passion for working with individuals that have disabilities,” Behnke said, “and I think Best Buddies is such a good organization that promotes that inclusion of those individuals.”

Seneczko, who has been part of Best Buddies for eight years, said her passion for inclusion and advocacy first began in high school when she had a friend with autism who she sat with every day at lunch. This led her to become involved with her high school’s Best Buddies chapter.

“I thought it’d be really cool to reach out further to that population,” Seneczko said. “I knew I could learn a lot from meeting all these diverse types of people and that’s kind of why I started.”

Best Buddies at Eau Claire is composed of about 80 members, just over half of them being college students and half community members, who are the students’ “buddies.”

Since there are more college students than community members, not every member is matched with a buddy. In those cases, the student comes to the organization’s monthly events to help out and socialize, but are not required to get together with a buddy once a month besides the event. This, Behnke said, allows some members to have a smaller time commitment while still being involved with the cause.

At the beginning of each semester, Behnke said they reach out to case managers, care teams and schools in the Chippewa Valley to find people who may be interested in becoming buddies. To be a buddy, the community member must be at least 16 years old and have an intellectual or developmental disability.

“We have some buddies who are 16, we have some who are 70,” Behnke said. “They come from everywhere, really.”

Monthly events can be anything from attending sporting events to last month’s event, which was a Halloween costume party also serving as the organization’s grand “Buddy Reveal,” where matches were announced for the year.

Behnke said she and her buddy, Nicole Baca, an 18-year-old Memorial High School student who has an intellectual disability, get together about twice a month. Over the course of the last three years they’ve been paired as buddies, Behnke said they’ve grown extremely close.

The duo does anything from going to Culver’s for ice cream, to going to the movies and keeping up with one another during the time between through texting and phone calls — but most importantly, they like to get ice cream, Behnke said with a laugh.

“I think the main thing I’ve learned is how … once you get past those first few kind of awkward stages, how wholesome of a friendship you can get,” Behnke said. “The friendship that we have together is just the most true … the way that they think might be so different, but in a way that can open up your mind.”

Not only has this friendship been a positive learning experience for Behnke, it has also been beneficial for her buddy.

The last five years Nicole Baca has been involved with Best Buddies have been “wonderful” and she “really enjoys” her friendship with Behnke, her mom Jodie said.

“Her university buddies have all been women, so they’re kind of like big sisters to her,” she said. “It’s nice that she has more of an adult-type interaction now. They do things on their own together, they text each other … It’s more of a peer relationship for her, which is awesome.”

On top of that, she said her daughter thrives at the opportunity to spend time with other individuals with intellectual disabilities.

“Every time Nicole goes, she has a ball,” Baca said. “I would highly recommend it (Best Buddies) to families with other children who have intellectual disabilities.”

Seneczko said she does similar activities with her buddy, 74-year-old Bonnie Frueh — “the same kinds of things you’d do with any other friends.” From the “special times” they’ve spent together, they have forged a similar tight-knit bond that has opened Seneczko’s mind, she said.

“People don’t realize enough that people with disabilities can have so much meaningful input and impact on society,” Seneczko said. “I think that’s what I’ve realized the most in my experiences, that those different minds have taught me so much more than I ever would’ve gotten without those interactions.”

Best Buddies is also active within the community and campus to advocate for activism for those with disabilities, as well as promoting inclusivity of all those who may be different.

Every year during the first week of March, the organization campaigns for Spread the Word to End the Word, making a promotional video and setting up a table in Davies for students to sign a petition against using the R-word. The group also disperses flyers about using person first language, since Behnke feels the R-word has “mostly been eliminated from everyday language.”

Best Buddies also advocates for those who have disabilities in indirect ways. Behnke said although she and her buddy may attract attention when they spend time together in public, she hopes it’s a teachable moment for civilians who may not have interacted with individuals who have disabilities.

“So many people see them as so different and just kind of cast them off to the side, but like they’re just like everyone else,” she said. “Being in the community and focusing on that inclusion … proves to society that it’s not so different. They’re just like us. They have the same hopes and dreams like we do, they want to have fun like we do.”

“We’re all more alike than we are different … We all want the same things — essentially, to feel loved, to feel liked, to feel included and … our involvement in the community … it’s adding that,” she said. “We can include everybody.”