Environmental geography student excels inside and outside of the classroom

Nontraditional student strives to improve the environment any way he can 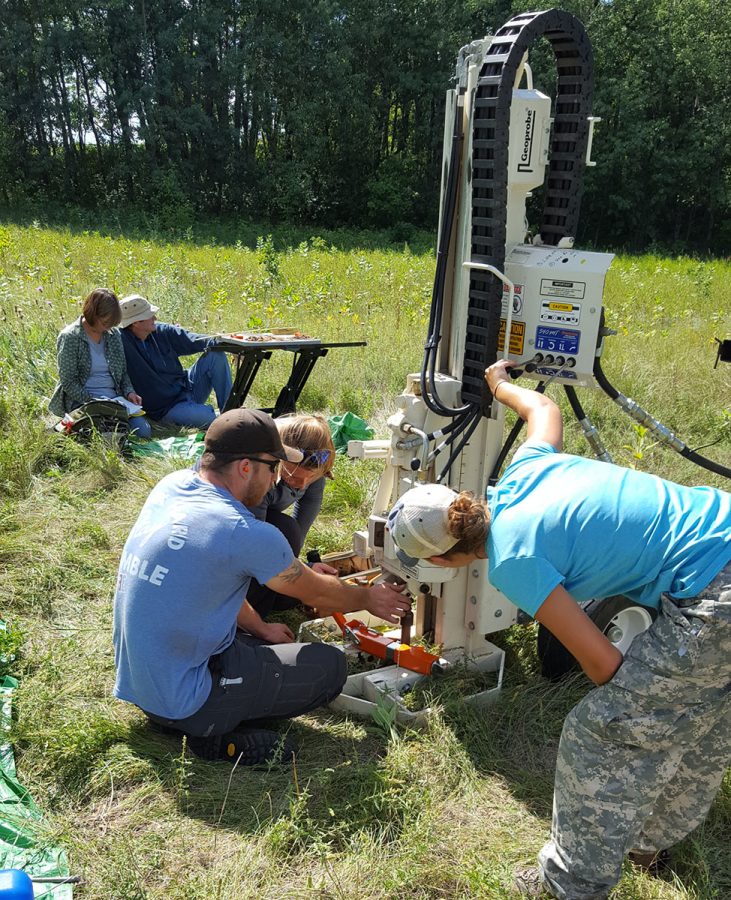 Many students struggle with getting good grades, saving money and maintaining a social life through college; but UW-Eau Claire junior environmental geography student Scott Nesbit makes it look easy with even more on his plate.

Every day is a careful juggling act between school work, a job, additional research projects and taking care of his family.

Graduating from Fall Creek High School in 2001, Nesbit enrolled in Chippewa Valley Technical College where he got his associate’s degree in machine tool technology. He then chose to go back to his job at a Harley Davidson shop, got married and had a child soon after.

In 2013, the 33-year-old decided to go back to school after inspiration struck from hearing of his grandfather’s work as a DNR Biologist at Augusta State Wildlife Area.

“Hearing the stories of him doing work there, I wanted to keep that going so my kid will have something to go to still before we destroy it all (the environment),” Nesbit said.

Nesbit said because of his love of the outdoors and computer work, Chris Mackey-Natz, his friend and Fall Creek Middle science teacher, told Nesbit to look into a job utilizing Geographic Information Systems (GIS).

Not too long after becoming a Blugold in 2014, Nesbit jumped into the research end of the geography department and started to work with students and professors on a variety of projects.

The summer after his freshman year, Nesbit did water testing on the Chippewa River with geography professor, Garry Running, to detect if there was an impact of agricultural run-off.

Nesbit began his next research internship in March 2016, which is still underway, with Associate Professor Joseph Hupy. They work with Unmanned Aircraft Systems (UAS) drones to display images of mines that can’t normally be reached.

His most recent research project took place just last summer. Nesbit went with Running to western Minnesota to help a group of archeologists during their quest to find Native American artifacts in the soil.

With a variety of research projects, internships and field opportunities, Running said Nesbit is always striving to do better and improve his skills even if it might not come easily at first.

“He is a creative thinker,” Running said. “He is not afraid to pound the keys and ask questions. You’ve got to be able to not give up and stick to it and he does.”

So far, Nesbit said his favorite research project was when he went to western Minnesota to search for Native American artifacts.

“It was something different,” Nesbit said. “You get to work with somebody outside of your field and learn about their perspective of the area.”

Nesbit went with Running; Kira Kuehl, a senior geography student; Elizabeth Fedewa, a junior environmental geography student and Alyssa Krantz, who graduated in 2016 with a degree in geography, to an area near Minnesota State University-Moorhead, where a group of archeologists were looking to find Native American artifacts.

The archeologists went around the area estimating where they thought would contain deeply buried cultural material. Nesbit said he and the others were then called in to test the selected areas, to see whether they were worth digging in or not.

Using a remote sensing system that examines and plots the surface of the earth, Light Detection and Ranging (LIDAR), Nesbit was able to see the changes in typography over the landscape and judge where possible archeological digging should occur.

The landform that is the easiest to identify and helps determine the history of the area is a river channel, Nesbit said. Once they identify where they think these landforms are, they go out and test the soil to either prove or disprove their theory.

When identifying the soil in Minnesota, Nesbit said he would use soil coring by drilling down into the ground and pulling up samples of the horizontally layered soil. Soil coring is a practice done to determine the soil structure of an area.

Based on the type and consistency of the soil they found in the sample, they could determine if what they predicted about the area is true.

Kuehl, who met Nesbit at the West Lakes Association of American Geographers (AAG) conference in Fall 2015, said Nesbit was helpful because he was very knowledgeable about many aspects in the field of geography.

“It was very mutually beneficial to have him in the department,” Kuehl said. “I know some things that he doesn’t and he knows a lot of things that I don’t, so having him there to consult with was really nice.”

Because it was their first trip out there, the end results showed they need to do more testing and research of the area. With this project still underway, Running said now they are aware of what they don’t know about the area and what they need to do to start answering those questions.

Kuehl is continuing the student/faculty research collaboration project using their previous research and aerial photographs to find more results for the archeologists’ use.

Nesbit said he had support from Running the whole way, from encouragement to push himself, to help with writing essays for grant proposals and scholarships. Running has been his greatest mentor and given him the guidance he needed to keep going in the right direction.

“He always does everything in his power to help me and get me to where I want to be,” Nesbit said. “He has gotten me to this point in my career.”

According to the NOAA website, the program offers hands-on experience through science, research, technology, policy, management and education activities in the form of a paid summer internship.

After working with him out in the field and back in the classroom, Kuehl said she knows Nesbit will be able to use his wide range of skills in a lot of different ways.

“He is a great person academically and socially,” Kuehl said. “He takes criticism very well. I think that any field he wants to get into will be greatly benefited by his presence.”

Running said coming into his freshman year as a geography major and pushing himself from the start has given Nesbit a wide range of opportunities for the future.

“I have seen enough people not push the envelope and they leave and they don’t have anything to show for it,” Nesbit said. “That is the one thing I didn’t want to do so I pushed myself and started research my freshman year.”

Nesbit’s goal for the after graduation is to work in land conservation, possibly as a private contractor working with farmers to ensure safe land management processes. He said all of his experiences and opportunities add to his list of tools and skills to use in that profession.

Looking to the future, not only for himself but also for his son, Nesbit said he wants to use his degree to improve how people treat their environment so when his seven-year-old grows up, he can have a safe environment to live in.