Hands-on experience has students swimming with sharks in Clearwater, Florda 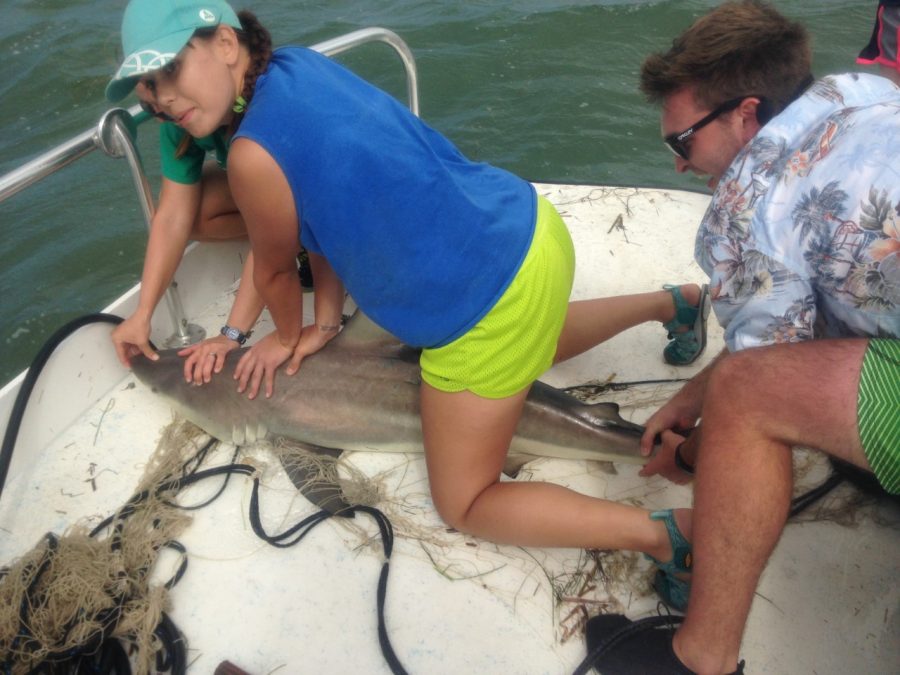 Taylor Isberner (left) and Bradley Storms holds down a six-foot long shark for it to be tagged. (submitted)

It’s not often students are tagging sharks and rays as part of a class assignment, especially not students from Wisconsin.

However, 14 students from the UW-Eau Claire Biology Department got to do just that.

From the ecosystems of Eau Claire to Clearwater, Florida the students of biology professor Todd Wellnitz’s Aquatic Ecology (BIO 376) class are covering ecosystems outside of simply the Midwest.

Thanks to a program put on by the Coastal Marine Education and Research Academy (CMERA), Eau Claire students got the hands-on experience of a lifetime, spending a week in Florida studying ecosystems and tagging sharks and rays.

Wellnitz has been bringing his students to Florida to work with CMERA for three years now.

Originally hearing about the program from a student who had done an internship at CMERA, Wellnitz said the student’s photographs and personal experience drew him in and made him want to bring his own students there.

“We’re trying to do high impact practices, and that was all about high impact,” Wellnitz said. “Every day out in boats, putting out gear, catching elasmobranchs (group of fishes to which sharks and rays belong).”

Wellnitz said the goal of the class is to get the students field experience capturing and handling these animals. However, it’s not just about interacting with the species; it’s also about exploring and learning about different habitats and ecosystems.

“(Students learn) some of the big issues that we don’t teach about much here because it’s not part of our life in Wisconsin; we don’t live on the ocean,” Wellnitz said. “But there we get a better sense of it.”

They each heard about the class from Wellnitz and said they were excited about the chance to go to Florida and get hands-on field experience.

“Since I was little I wanted to go tag sharks like the people do on Shark Week, so it was something that I’ve always been interested in,” Storms said. “I know that after college I’m not going to have the same experiences available to me.”

A normal day at CMERA started out similar to Eau Claire, with a hour long lecture in the morning covering a variety of topics from sharks and rays, to turtles, dolphins, manatees and even a hurricane 101 lecture.

After lecture, the students headed out to the marina where there were two boats, one big and one smaller. The big boat went further off the coast, as far as 15 miles, and set up long lines with bait. The smaller boat stayed inland putting out a gill net that sharks and rays glide into with the current. Storms said it is humane and they work with marine biologists to make sure they’re using the safest method for the animals.

Once the shark or ray is on the boat, they are given water so they don’t suffocate, and then everyone rushes to collect data, DNA and tag the animal. Isberner said the rays were on the boat a lot longer but the sharks, which need to be swimming to breathe, were on for only about five minutes.

Storms said one of the coolest moments for him was pulling in a six foot blacktip shark on the last day they were on the boats.

“Just the way everyone reacted when we got it on the boat, because we had to hold it down and it was moving around on the boat,” Storms said. “It was crazy. It was an adrenaline rush and I’ll just never forget that.”

The students are on the boat 9:30 a.m. to 5 p.m. where they eat lunch and even sometimes, on the large boat, got to snorkel.. While some students were snorkeling in hopes of seeing dolphins, they ended up swimming with two bull sharks and a huge school of barracuda, instead.

“You hear all these horror stories about being in the water with sharks and you just go jump in and do it,” Storms said. “It was unbelievable to see these creatures that you’ve read about, swimming down below you and it’s not in an aquarium.”

No one was hurt, which Storms said just proves that sharks are not interested in people and have no interest in having humans on their food chain.

He said the few shark attacks that have happened come from surfers who look like seals. When an attack happens, it’s usually one bite before the shark realizes it wasn’t a sea creature, spits it out and leaves the person alone.

Storms joked that he read a statistic that each year more people are killed by vending machines than sharks.

Sharks are actually an endangered species, which makes tagging even more important.

Through the tagging and DNA collection of both sharks and rays, the students are able to learn about the migration patterns, populations and the species DNA. All of the information gathered builds up a big data set that is used for research.

Isberner said she was never nervous when it came to tagging the sharks and rays, thanks to the solid leadership from CMERA, who always told the students what to do and how to process everything.

An ocean of possibilities

After spending a week in Florida, Isberner and Storms learned more than they ever imagined about sea creatures, their class and themselves.

They both spoke volumes of the class bonding that occurred over the trip and how they came away with not only great field experience but great friends.

“We all barely knew each other going into it and just through the adversity of catching these sharks, spending the time on the boat, we all got so close,” Storms said. “You know everyone comes from such different backgrounds; obviously we’re all biology majors but some people want to go work for the DNR, others want to go into healthcare fields and it was just really cool to see us all get along so well together.”

Wellnitz also shared the students’ sentiment, expressing how great it is to see students go from being quiet in the classroom, to coming out of their shell and getting to know each other on the trip. Going forward he feels class is going to be much more fun, because the students have broken through barriers with each other.

Isberner, who is currently applying for veterinarian school, had expected to be a vet in the Midwest. However, she came to realize she may not stay landlocked forever.

“I didn’t ever realize I would have such a passion for marine biology,” Isberner said. “Now I’m like, oh, I could go into marine life and work with exotics, that would be awesome.”

Wellnitz said he encourages students to understand there is more than one path in life and that they don’t need to do the same thing for the rest of their lives.

Since the experience, Storms encourages students to try new things and remember to have interests outside of simply your major.
“Even if you are thinking, I want to be pre med, or anything in healthcare,” Storms said, “You can take a class or two and go do a side interest, you don’t need to be narrow minded the entire college experience because you miss out on so much.”