NOTA fosters creativity within the community 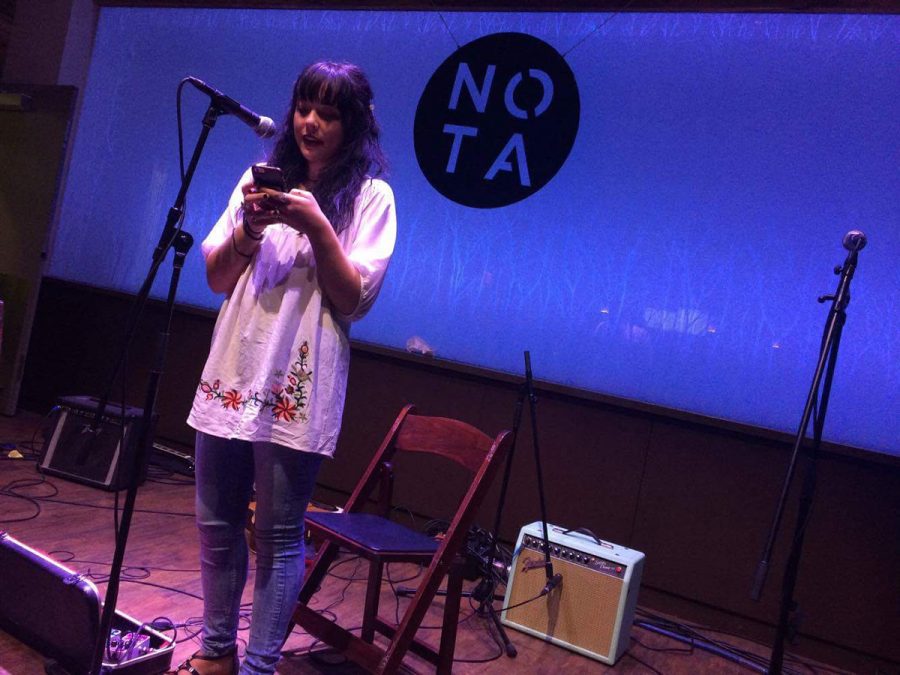 Rayna DeJongh performed at a NOTA-sponsored open read last Thursday at The Cabin.

An alluring taste of peaceful ecstasy fills my lungs as I breathe in the sweet air of uncertainty, love, angst and happiness all in one swallow, radiating from those who chose to share a small piece of their soul with strangers in an all-too-familiar place.

An aura of comfort followed as I realized this was not the scene of quiet desperation, but a community of people who felt at home in a small coffee shop void of judgement and filled with loved ones. It was a sense of home I haven’t encountered before, but one I long for again.

Last Thursday The Cabin was packed with musicians, poets and writers from every discipline who had a passion for performing their prose and poetry at an open read sponsored by NOTA.

NOTA (None Of The Above) is a student-run, award-winning literary and arts magazine that features a collection of student art, poetry, prose and music. A selection committee, which is open to students, votes on what pieces go into the magazine that is published at the end of every semester.

NOTA also organizes open reads one Thursday per month which are usually held in The Cabin. The open reads are open to the public, welcoming everyone to share their poetry or prose. A book release party is also featured once the magazine is published, where students share their selected works with The Cabin audience.

Sophomore English student Rayna DeJongh is the marketing coordinator of NOTA and co-host of a poetry broadcast on Blugold Radio. She said NOTA’s ultimate goal is to not only to publish the magazine, but also to foster a sense of community between local artists.

“It’s sharing so many things that are deep and sometimes provocative, but in a good kind of way,” DeJongh said regarding the open reads. “It’s so blatant but I just love it.”

The atmosphere is a “homey, warm environment” where everyone is supported and accepted, DeJongh said. A student musical guest performs between bouts of readers, adding another creative element to the talent shared.

“It’s a really fun environment where everyone there is interested in art and we’re all sharing it together,” DeJongh said.

DeJongh said she was a writer growing up but her interest in poetry was another unexpected caveat in her increasingly unpredictable life. Growing up in a wealthy town, she described herself as an “angsty teen” that hung out in coffee shops writing in journals to get her feelings out on paper.

“I grew up in a town where everything was super black and white,” DeJongh said. “I always felt like a kind of enigma. I felt like no one liked what I liked and I just felt really isolated. When I came here [to Eau Claire] I just decided I was going to put myself into everything I could to see if could find my niche because I never really felt like I ever had that at home.”

She soon found out that niche was poetry and she was able to combine her passion for writing with her on-campus job at Blugold Radio.

“The radio was what sparked everything,” DeJongh said.

Her involvement with NOTA began with the people she met through Blugold Radio, which stirred an unexpected but exciting connection between the two organizations, she said.

DeJongh co-hosts the poetry segment with Lisa Krawczyk. Last week’s segment included poems from vast topics and authors—a poem from an infero to a comedic ballad about cats, to be exact. The 15 minute segment was as enjoyable to listen to as the open read, where both co-hosts read and discussed poetry with confidence and wit.

The broad range of topics on the poetry segment mirror the vast array of inspiration for DeJongh. From darker themes to love ballads, her poetry tells the tale of life through Rayna’s eyes.

“A lot of times I’ll just talk about a person I admire. Or moments in life where you feel super alive—that’s one of my favorite things to write about,” DeJongh said. “After a night out of feeling really happy, I love to relive that moment through my writing, just to recognize how free I felt in that moment… It changes based on how my life is going and what’s affecting me, what’s heavy on my heart. Sometimes it’s free-formed, throw-up-on-a-page kind of writing.”

This writing “vomit” is a beautiful combination of emotional turmoil, ecstasy and repose. The poetry shared at the open read was both insightful and inspiring, an experience that does not compare to the liveliness of actively performing.

Advice to other poets

“Get involved and find your niche. Put yourself out there,” DeJongh said. “Channel what you’re passionate about and it will lead you to where you want to be. Don’t feel isolated or ostracized because you have different interests than other people.”

Some closet poets may find the idea of speaking in front of others terrifying, but it’s something everyone goes through, DeJongh said.

Getting up and sharing poetry used to be “such a scary thing for me, but when I came here and I saw other people doing it, I saw how accepting they were,” DeJongh said. “Eventually I knew that I just had to do it — it’s such a small sacrifice for what I’m trying to work towards… Anyone can do it, you just have to try. I know it sounds cheesy, but it’s true.”

As an English student interested in poetry, DeJongh also recognizes that she is not guaranteed to get published, which is her ultimate goal in her academic career. However, she insists to push forward because it’s living in the moment and doing what you love that really matters.

“You just have to work really hard for what you want when you’re in that situation. That’s what drives me,” DeJongh said. “It’s changed my outlook on life in a ‘sieze the day,’ ‘just do it kind of do it now’ kind of way.”

B.J. Hollars, faculty advisor of NOTA and founder of the Chippewa Valley Writer’s Guild, noted how integral NOTA has been over the past year in reaching out to a wider community by providing opportunity for university students to connect to the local community.

Hollars said NOTA, the Writer’s Guild, Volume One and The Confluence Art Project can be credited with “fostering a thriving arts community on campus and in the community.”

When students are able to give back to the local community by attending and hosting readings, writing book reviews or writing articles for regional newsletters, students give the gift of using their talent to better the community, Hollars said.

“We really have something unique here in terms of artistic output,” he said. “The more we can harness both the economic and cultural power of art, we can only enhance the quality of life of both the students and larger community.”