First years from around the globe

International students complete their first year in U.S. while preparing for the future and reflecting on lessons learned and memories made 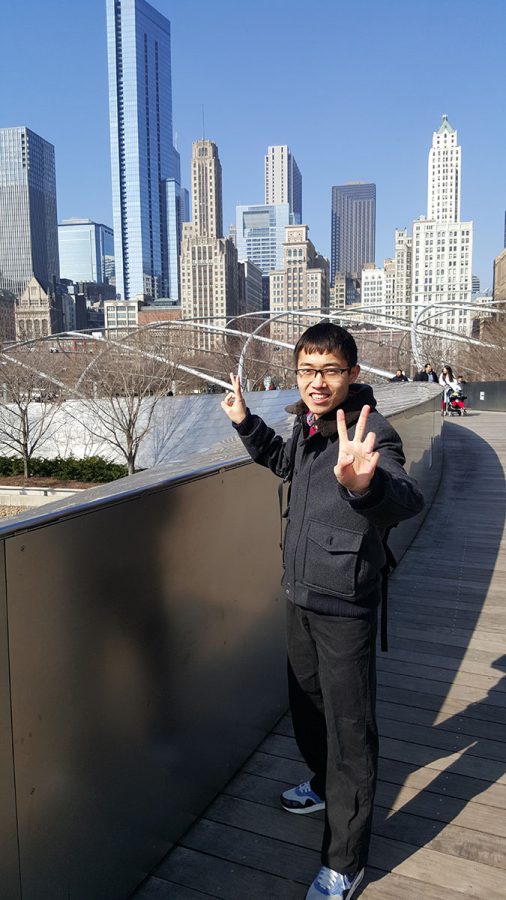 Qiusheng Zhu traveled to Chicago during his first year in the U.S. He hopes to see many more locations in upcoming years.

Every year UW-Eau Claire sees between 250 and 300 international students. Whether a student spends one semester here or four years, their first period of adjustment can bring many new memories and lessons.

Barbara Ferreira Aguiar Felizardo Evangelista is a computer science student from Brazil who is preparing to return home after a year of study at Eau Claire.

As the semester draws to a close, she reflected on the memories she made here in Eau Claire and the things she is looking forward to at home in Brazil.

“Life lesson: Don’t complain about Brazil health insurance or food,” Evangelista said. “Brazilian food is not more healthy, but it is more natural. We can just go to the garden and eat some.”

Some of Evangelista’s favorite memories of the year include floating down the river, watching a baseball game in Carson Park, and living through the weather patterns in Wisconsin, she said.

One of the greatest things about Eau Claire was the accessibility of the professors, Evangelista said.

“My university in Brazil is a huge university … I send them an email and either 1,000 years later they respond to me, or never,” Evangelista said.

“Last semester was very good, we made a lot of friends from all over the world, Evangelista said. “Me and the other three Brazilians are kind of alone this year, not alone, because we have some American friends, but everyone left after the first semester.”

The ideal amount of time for an international student to stay is a year and a half, Evangelista said. She would add another semester onto her year-long stay if she could, because being in Eau Claire has been a break from her day-to-day life in Brazil; she doesn’t have to work here and she can go out without fear of being robbed.

One of Evangelista’s favorite things about Eau Claire’s international program was the host friend program that all international students participated in at the beginning of the year, she said.

However, the host friend program is being modified so only students who intend to pursue a degree from Eau Claire and stay for over one year will be able to participate in it, due to budget cuts, said International Student Advisor Maria Carvalho.

“The host friend program is a key connection that helps students adjust, not only on campus but also in the community,” Carvalho said.

There are various reasons that international students come to Eau Claire; some come here to study English specifically, while others come on a bilateral exchange program for either a semester or a year. Some stay for a year on a sponsor program or come here for a degree, Carvalho said.

Qiusheng Zhu is a first-year student from China who is studying pre-engineering. He is planning on completing his college education in America, and said his first year in Eau Claire has taught him many lessons.

“I came here and thought that American people are very smart because they can speak English very well,” Zhu said. “It will take me ten more years to learn.”

While he and Evangelista were both impressed with the accessibility of the professors, he has also been impressed by the friendliness of students, Zhu said.

Zhu said he has done a lot of things this year that he would not have done in China, including going to Disneyland with several other international students, and getting a job.

“It was very important for me because I never had a job in China before I came here,” Zhu said. “I learned how to clean things, and it’s an experience. It’s necessary to learn that kind of stuff.”

He said his goal for upcoming years is to improve his English, learn more about American culture, and make more American friends. He also hopes to travel.

He hopes to see much more of America and visit New York City and Chicago, along with Yellowstone National Park and the Grand Canyon.

“If I could change anything about this past year I would study harder and improve my English better,” Zhu said. “I would not just hang out with Chinese friends and would make more American friends.”

Zhu plays pingpong, pool, and basketball. He said he hopes to join more activities or intramural sports and make more American friends in the future.

Maria Carvalho assists incoming international students in understanding the system and university atmosphere and structure. Making friends whose first language is English can be difficult depending on the culture the student is from and how good their English is, she said.

Native Wisconsin residents can learn from international students as well.

Evangelista said if she could tell Eau Claire students one thing it would be to be more okay with hugging one another and touching.

“Something that I really miss, is in South American culture we are really close to each other,” Evangelista said. “We touch legs, and we hug, and we don’t care about it, but here if I touched you it would be ‘eughh’”