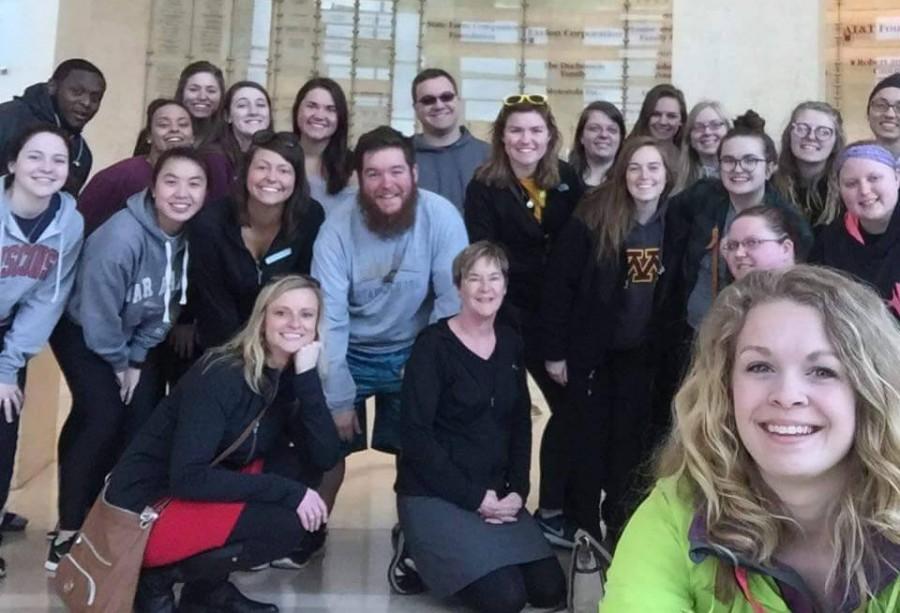 Matt Passineau and multiple other students and faculty as part of the Selma and UW-Eau Claire exchange program explored the deep south over spring break.

As he was crossing over the bridge ,he said he couldn’t help but notice an elderly woman who had been walking beside them the whole time begin to struggle and cry. Seeing her in pain,  Passineau walked over to her and asked what was wrong.

The woman said, “I started this 50 years ago by myself, and I’m going to finish it today.”

This simple phrase made Passineau reflect and think about how the trek that they were taking that day was much more than “just a simple march.”

After this experience during his first trip to Selma last year, Passineau said he knew right then and there that he needed to make some changes in his life.

“Hearing this woman say that, and then pretty much the rest of the week just hanging out with the kids and just experiencing the people, it made me realize that sitting behind a counter handing out pills for eight hours a day isn’t what I wanted to do for the rest of my life,” Passineau said.

So Passineau set out to make changes, starting with switching his major to social work and becoming even more involved with the city of Selma.

Passineau found an internship with the Something New organization the summer after his first trip to Selma, which allowed him to work at an art camp for kids based out of a local church in the city. Along with this, the internship also had him traveling to a local college to teach nonviolence courses frequently.

Nonviolence was something used by King during the civil rights movement, and teaches people to process experiences before reacting, rather than making rash decisions.

Although he could have stopped after his internship, Passineau was hungry for more. This spring he became a student coordinator on the Selma-Eau Claire exchange trip, which meant he would lead a small part of the group on daily trips, plan trips and lead daily debriefings after each day of travel with students.

The trip is an alternative spring break opportunity for Eau Claire students that allows them to work with citizens, travel the city and learn more about the cities culture and inequality, Passineau said.

Although Passineau quickly fell in love with working with others in the city of Selma, he said it was simply by a chance decision that he traveled to the city in the first place.

He said he decided to go on the trip the first year because it gave him his service learning hours and was rather inexpensive.

“A friend of mine was looking at one of the posters for the trip and thought it looked pretty cool because you got all 30 service hours and it was only 200 bucks,” he said. “I needed my service hours so I signed up for it not expecting to get anything out of it, and once I got there everything changed.”

During the spring break trip, Passineau said a lot of the time was spent traveling to historic places within the city, along with going into schools to help out the children and helping the schools move their book collections into a digital catalogue.

He said they were able to go into classrooms and interact with kids of all ages and see the difference in teaching and learning styles in classes in Selma compared to Wisconsin. After school, they helped out at an organization in the city that gives a place for kids to go when they don’t have much to go home to, and puts them in a better situation.

Passineau said being able to help out in these places made him thankful for what he has, as the kids’ situations were very rough.

“Living there is a hard thing, there’s a lot of oppression and racism still, it’s a crazy thing,” he said. “A lot of the kids were in tough living situations and we just did our best to try to help them while we were there.”

Nicole Schultz, associate professor of communication and journalism, teaches a course that had multiple students travel on the exchange and was one of the leaders on the trip.

The course teaches students about how gender, race and class are constructed and how they intersect with one another, Schultz said. This trip was focused on the race aspect, she said, but topics of gender and class were also mixed in.

This spring was Schultz’s second trip to Selma with the class and second time working with Passineau on the trip as well.

Schultz said Passineau really developed a passion for civil rights on the trip, which he said is not something he had expected prior to going.

“Matt really developed a passion for civil rights that has led him to declaring a degree in social work,” she said. “I think he was so moved to say that he wanted to find his place professionally to be able to support and make institutional changes while there.”

Schultz said one of the biggest things students like Passineau are able to take away from the trip is the intersection of gender, race and class.

She said Jimmy Webb, a man who was involved in the civil rights movement at a very young age, highlighted the practice of nonviolence from black freedom fighters in interactions with troopers in Alabama and connected it with today’s modern-day LGBTQ community and how they are mistreated.

Although Passineau wasn’t enrolled in the class, he said he still took a lot away from the trip in his leadership role. One thing that really stood out to him, he said, was the friendly lifestyles of the locals.

“The idea of southern hospitality is still so alive,” he said. “Any person you meet on the street is willing to go out of their way to say hello and ask how you are doing, but up here we don’t really realize that.”

Passineau said many people go to Selma with the wrong mindset thinking the trip is all about helping out the locals and receiving nothing in return. However, he said that is the wrong thought process.

“A lot of people go to Selma asking what they can do for the city,” he said. “But in reality it’s really what Selma can do for you as a person.”