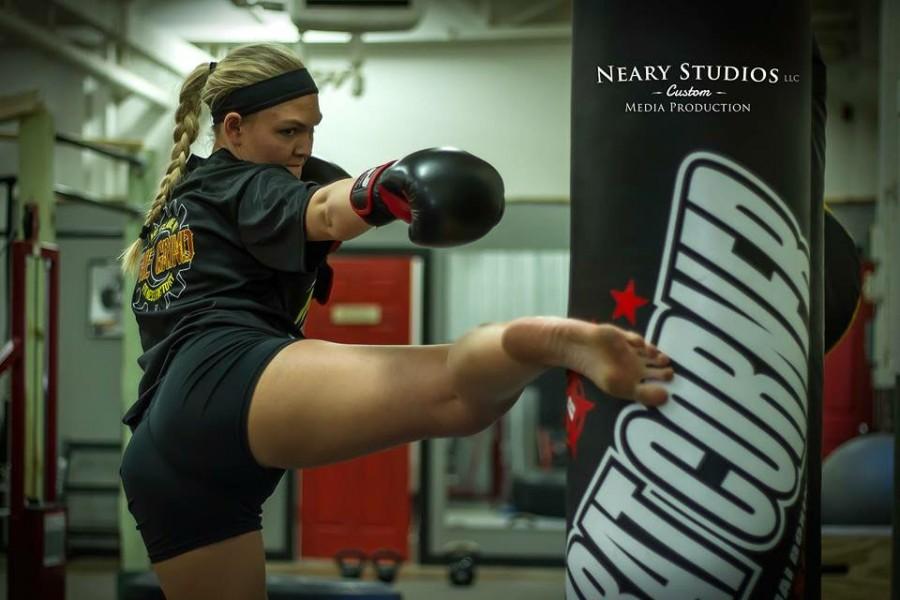 Senior marketing major Jennifer See is in the peak of her training camp for her mixed martial arts fight Oct. 3 at the Eau Claire Indoor Sports Center. She is also a WWE prospect and will be attending Monday Night Raw later in October to learn more about her future with the company. (SUBMITTED)

Walking down the entrance ramp at World Wrestling Entertainment’s Monday Night Raw, UW-Eau Claire senior Jennifer See felt the electricity running through Minneapolis’ Target Center. As she made her way to the end of the ramp and set her eyes on the the 20-by-20 ring, the electricity in the air landed near See’s feet and shot up her body.

In that moment, she felt a fraction of what it is like being a WWE superstar, and knew she wanted more.

During her first WWE experience there was no entrance music, the arena was relatively empty and inside the squared circle were a couple of wrestlers preparing for the night’s show.

See was on WWE’s center stage during the calm before the storm.

In a couple of hours, over 18,000 screaming fans would fill the Target Center for cable’s longest running weekly program, Monday Night Raw.

Once Raw got underway, See said she sat backstage watching the action while craving the energy she felt on the entrance ramp just hours ago.

After the show concluded and the cleanup process started, See reminisced on her experience of stepping inside the ropes and shaking The Undertaker’s hand.

Though her night with the WWE was over, her future with the company was just getting started.

To be included in the same sentence as Austin or Michaels is high praise for a 21-year-old with no in-ring experience, but Herro’s connection to the WWE dates back to 1997 and after meeting See at an Eau Claire Express game this summer, Herro noticed her “it” factor immediately.

Herro said he’s seen hundreds of wrestlers who look the part, who are taught how to work a microphone and develop an in-ring repertoire, but don’t gain popularity because they lack the most vital trait a WWE superstar can have.

After 18 years in the business, Herro is confident charisma is one of See’s best attributes.

But See’s moxie comes from within. On the outside, the 5-foot-10 former Blugold volleyball player contains the type of athleticism to thrive in the ring.

Though professional wrestling is scripted, the hits, falls and injuries are all very real. Unlike parts of the WWE, there is nothing fake about See’s fighting skills.

See walked away from volleyball two years ago and after taking time off from sports, she realized she needed to replace the void volleyball left.

Watching a close friend fight in mixed martial arts several times in the Twin Cities is all it took for See’s fascination with the sport to set in.

See soon found herself training with the owner of The Grind Fitness Factory, Steve Gibson.

The Grind offers training in kickboxing, jiu-jitsu, muay thai and many other martial arts, and Gibson said after working with See over the past year, her competitive drive and work ethic set her apart from other women in the sport. So much so she is scheduled to compete in her first official kickboxing match on Oct. 3 at the Eau Claire Indoor Sports Center.

“If she does well and dedicates herself,” Gibson said, “there is no reason why in three or four years we won’t see her on TV competing.”

See said when she thinks about her first official fight and how quickly it is creeping up on her, she bursts with excitement and wants the round to start immediately.

She has trained for a year and if she wasn’t ready, Gibson wouldn’t put her in the position to fight, Gibson said.

She has all the tools to win, but See said there are days she doubts herself and questions whether she even wants to fight, or if she will be able to handle the rigour of an MMA match.

When doubt trickles in, she picks up Ultimate Fighting Championship star and women’s Bantamweight champion Ronda Rousey’s book, “My Fight/ Your Fight,” and remembers losing is sometimes a part of life and there is nowhere else she’d rather be on Oct. 3 than inside the octagon.