Senior Blugold has been around basketball since birth; hopes to leave a lasting legacy with end of career 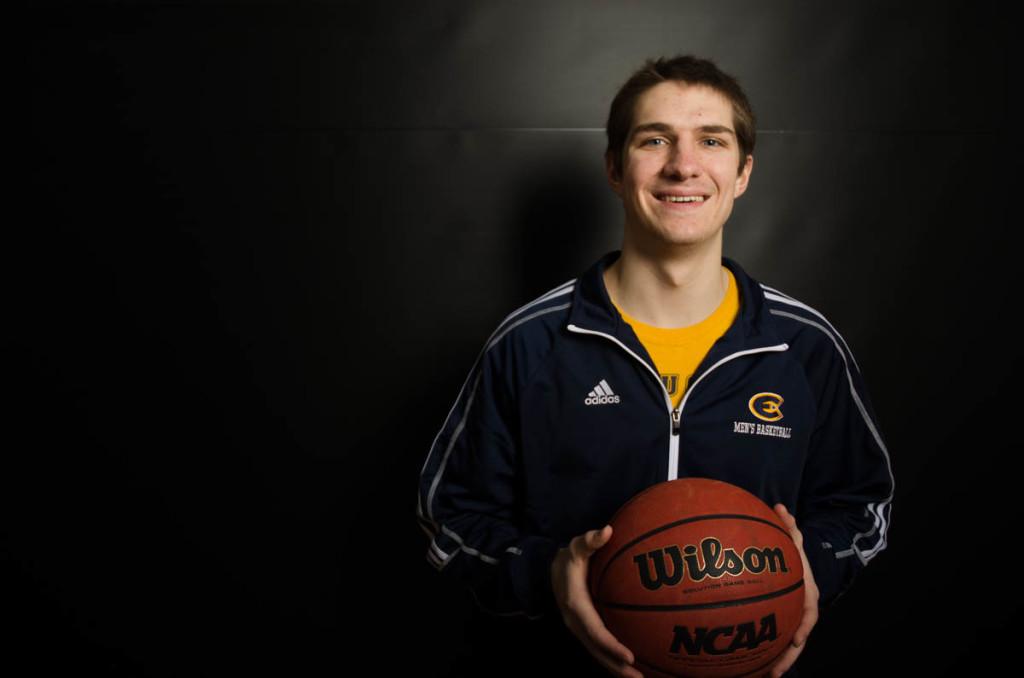 Effertz is having a career season shooting 42 percent from the field while not missing a game.

Three years ago, Eric Effertz was sitting in his dorm when he heard the news.

His head coach was leaving UW-Superior to take the same position at UW-Eau Claire.

The then freshman looked at his friend Adam Hjelter and said, “We have to go.”

In that moment, Effertz knew he was in his final semester as a Yellowjacket.

“I was going to miss my Superior teammates,” Effertz said. “I had a great year there, but knowing what coach (Siverling) could accomplish, I knew I wanted to carry that over to Eau Claire.”

Effertz joined a team that hadn’t made the WIAC playoffs in three years with its head coaching situation in flux.

The program lacked direction, but head coach Siverling hoped to fill that void, and Effertz and Hjelter were coming with him.

Three years later, the point guard is in his final season as a Blugold and has lead Eau Claire to its first postseason berth in six years.

“This is it for me,” Effertz said. “I didn’t want to come here and never make the conference tournament. If I don’t do it now then I’ll do it never.”

The 5-foot-11 guard is having a career year in his senior season. He started in all 26 games this year and is shooting 42 percent from the field. Effertz is also knocking down 40 percent of his 3-point shots.

The outside shot hasn’t always been a strength of the Ladysmith graduate, but this year he said his green light to shoot is a result of an increase in the coaching staff’s confidence in him.

Late in the season, Effertz assertiveness became apparent, getting the ball in his hands late in the shot clock and shooting more perimeter shots.

Matt Siverling said Effertz challenged himself to become more aggressive on offense while sustaining his intensity on the defensive end.

“His experience is a big thing for him because he knows what we are trying to get done,” Siverling said. “He stays composed no matter the situation, and that is what you want out of your point guard.”

When Siverling decided to come to Eau Claire he knew he wanted Effertz to join him. He said the floor general possessed the intangibles necessary to be apart of his new Blugold hoops vision.

Like Effertz, Hjelter has the characteristics Siverling wants in a basketball player, and he asked the two friends to join him.

Effertz and Hjelter’s friendship started well before the two enrolled at Eau Claire.

During Hjelter’s first day at Superior he said he met Effertz, and the two shot hoops together in the gym and their friendship took off from there.

Hjelter said he knows he made the right choice coming to Eau Claire with Effertz. He watched Effertz grow as a leader and a point guard over the past two years, and seeing him reach the playoffs this year has been a memorable experience.

“When we were at Superior we made the (WIAC) tournament,” Hjelter said. “Him, I and coach know what it is like to get there, so getting over to Eau Claire and starting to build the brand of basketball we want here means a lot.”

Despite missing two seasons of play with Effertz due to injury, Hjelter said he cherishes the bond he has with his long time friend both on and off the court. The two have been roommates for three years and both have pushed each other to be better players and individuals.

“I think Eric and I have created a friendship that will carry over for the rest of our lives,” Hjelter said. “I am thankful for that, and him taking me in as a friend has meant a lot.”

Without deciding to come to Eau Claire and starting the process of building a team from the ground up, Effertz and Hjelter may have never grown as close as they are.

Effertz also would not have had the opportunity to bring playoff basketball back to the men’s program like he has this season.

Early in Siverling’s time as head coach there were a lot of loses, including only seven conference wins in two seasons, but Effertz never doubted his coaches vision because he had the same one.

Feb. 26., Effertz will take the court for what may be his last collegiate game ever.

Regardless of the shelf life on Effertz career, the longtime basketball junkie knows once it’s over and his legacy is set, he is going to miss the game.

“Basketball has always been a release for me, just to get away and do something I love,” Effertz said. “I don’t know what I’m going to do without it, but everything comes to an end, and this end will be a tough one for me.”