Sophomore twin brothers’ love for a video game drove them to share their passion with others on campus. 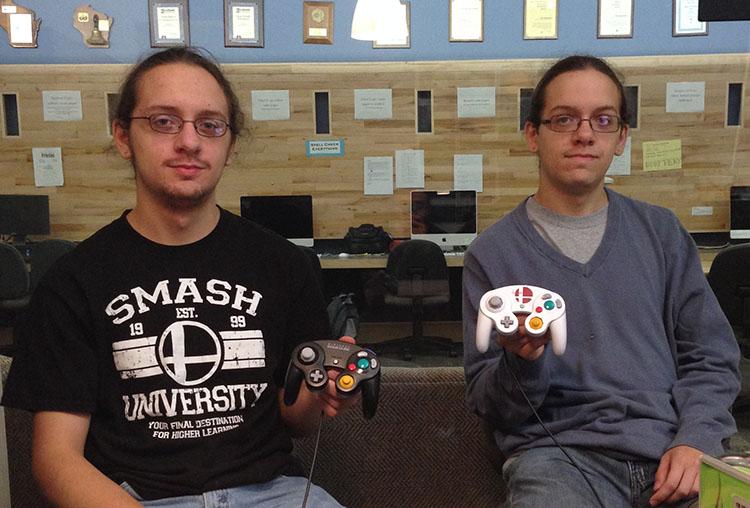 Adam and Alex Ray took their gaming passion to a new level by starting the Super Smash Bros. Club at UW-Eau Claire.

Up, left, A, B, left trigger, up again, right trigger and Z.

This sequence of commands, which can only be performed on a Nintendo GameCube controller, race through the minds of sophomore brothers Adam and Alex Ray as they duel each other in their favorite videogame — Super Smash Bros. Melee.

Super Smash Bros. Melee, often referred to as “Smash Bros.,” is a fighting game where the players select from a wide variety of Nintendo characters like Mario, Zelda or Pokémon to fight against each other.

The two brothers have been avid players of the popular title for over four years. They’ve competed in tournaments as close as the Twin Cities and as far as New Brunswick, N.J., where they took part in an international tournament with more than 700 players.

In hopes of not having to travel such distances to find competition, the identical twin brothers decided to create their own Smash Bros. scene in Eau Claire by forming the Super Smash Bros. Club last year.

The club meets every Friday at 6 p.m. in Davies Center room 211, and Adam Ray said the club provides students with a chance to learn, sharpen and heighten their Smash Bros. skills while creating a family-like atmosphere.

“Without getting into the competitive Smash community, I don’t think I would be where I am at today,” Adam Ray said. “Because of the people I have met and befriended over these years.”

Through their years of being on the competitive scene, Adam Ray and Alex Ray have made connections and friendships that they said will last them a lifetime.

The club has seven consistent members, and Adam Ray said he and his brother tend to keep meetings unstructured because they want to be able to instruct players when they need help with certain button combinations and moves.

The Ray’s said they can sense the Smash Bros. scene rising in Eau Claire, and they anticipate it will continue as Nintendo has new titles in the series coming out this year.

As their passion for the one-versus-one action game grows, so does their brotherly love.

Alex Ray said the game has created a special connection between him and his brother as it is an activity they have come together and bonded over.

“This is something we both love, and we are able to practice, play it and be a part of it every single day,” Alex Ray said. “It is something that has been a part of our everyday lives for the past several years now.”

The two Eau Claire natives have found a fiery drive to excel at combat style video games. Alex Ray said he has been a fan of the Smash Bros. series for a long time, and although the brothers are slowly expanding their taste of virtual fighting games, Super Smash Bros. Melee is his undisputed favorite.

He said he enjoys the fast-paced style the game provides, and despite the game being over 12 years old, it still has a large, welcoming community that the two brothers find at every tournament they attend.

It is a community they are immensely proud to be a part of, and the club is in the process of growing in Eau Claire. Alex Ray said he urges anyone who is interested in joining or exploring the word of Super Smash Bros. to contact him.

“We want to create a competitive group of players here to build this scene,” Alex Ray said.