Breaking the barriers of language 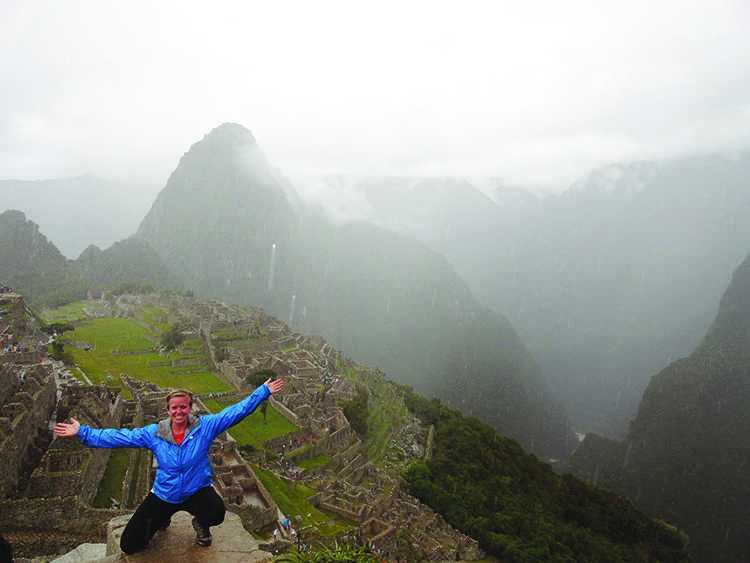 Mary Beth Hipple, UW-Eau Claire senior, poses for a photo at Machu Picchu in Peru, South America. Machu Picchu is one of the seven wonders of the world. © 2014 Martha Landry.

When asked ‘How was your winter break?’ Mary Beth Hipple is able to explain a unique story of adventure, education and excitement.

For three weeks in January, Hipple, a UW-Eau Claire senior, volunteered and taught English in Cusco, Peru. She spent most of her time teaching English to girls 12- to 18-years-old, at a teen orphanage in Cusco, but she also volunteered at a nursing home for abandoned elderly people.

Hipple was approached by fellow Blugold Elise Dillon who already planned to volunteer over winter break. The women worked through an organization call Maximo Nivel, which offers language, education, adventure and cultural programs in the Americas.

The girls Hipple taught  were either placed in the orphanage or voluntarily left their families because of abusive situations. Hipple said volunteers weren’t required to speak with the girls about the abuse, but many still shared their stories.

“They taught me just as much as I taught them,” Hipple said. “I learned about the culture of Cusco. I saw a different part of the world and how different it was from my life.”

The program ran four months in Cusco. There were four other volunteers at the orphanage Hipple was working at, but only two were able to stay the whole time. Hipple said learning English for four months wouldn’t make the girls fluent, but they would receive a certificate to show future employers to say they knew some English.

Hipple said she wanted to stay for the entire program, but taking a semester off wasn’t an option.

“I thought about (staying) multiple times,” Hipple said. “However I’m in my block semester for the education program so it would be the worst semester to take off.”

She said it was hard to leave the girls because they didn’t fully understand why she was leaving.

Hipple said even though she was only in Cusco for a few weeks, she was still able to form relationships with the girls she was teaching.

“Talking with the girls was a lot easier than I thought,” Hipple said. “Just getting to know where they come from, about their families, what they do like, what they don’t, about boys.”

Hipple has taken four years of Spanish and a class about teaching foreign languages. Also, she was the only volunteer with an education background, so she was able to create lesson plans for the months she would be gone from the program.

The volunteers did more than just teach English at the orphanage. They also spent time at a home for the elderly. Hipple said most of the elderly people were abandoned by their family before the nuns who run the home foud them.

Hipple said the elderly people at the home speak Quechua, the native language of Peru. The language barrier meant the volunteers could sit with each other, but there wasn’t any verbal communication.

Hipple’s mother, Anne Hipple, said her daughter has been a helpful and considerate person since she was a child, especially to adults.

“As a person she is adventurous, she is kind, she is loving,” Anne Hipple said. “I think she is a pretty amazing individual. She is very tolerant of other people and their personalities. I could go on forever.”

Anne Hipple said she was nervous at first for her only daughter to travel to a new country alone, but knew Mary Beth Hipple would have a successful trip.

“I had a lot of emotion,” Anne Hipple said. “My child was going away for the first time alone. I was fearful, then I was excited for her. What a wonderful opportunity it is for her to learn and to see the world as a young adult.”

Before the trip, Mary Beth Hipple had only traveled to Mexico and around the U.S.

Hipple and the volunteers spent four hours a day teaching English at the orphanage, but the rest of the day was free.

“We had most of our nights and our weekends open,” Hipple said. “We would volunteer all day and then we would explore the city.”

Cusco is the historical capital of the Inca Empire and the city is dotted with ruins. Hipple said she hasn’t taken many classes about Incan history, but she could still appreciate the experience.

“It was the most wonderful feeling seeing those places and knowing how old they are,” Hipple said. “It was history lesson.”

Hipple and her fellow volunteers hiked Machu Picchu on one of their adventures. Machu Picchu, an ancient Incan city built on a mountain top outside of Cusco, is one of the seven wonders of the world. The group was also able to hike Hauyna Picchu, the neighboring mountain often seen in photographs.

“We got the full tour of what it is,” Mary Beth Hipple said. “It’s just as beautiful as I thought it would be, and it was rewarding to hike all the way up there.”

A landslide caused damaged to the bus station, which tourists usually use to get to the top of the mountain. Hipple said being able to hike to the top made the experience even more special.

Mary Beth Hipple said she met people from all over the world while in Peru and has plans to visit them soon.

This summer Mary Beth Hipple will study abroad in Costa Rica through UW-Eau Claire. She said the three week trip to Peru was a warm up to the longer trip over the summer, but she is anxious to travel again.

“I want to go everywhere,” Mary Beth Hipple said. “I’m going to Costa Rica this summer to study abroad and I am going to want to travel all the time.”