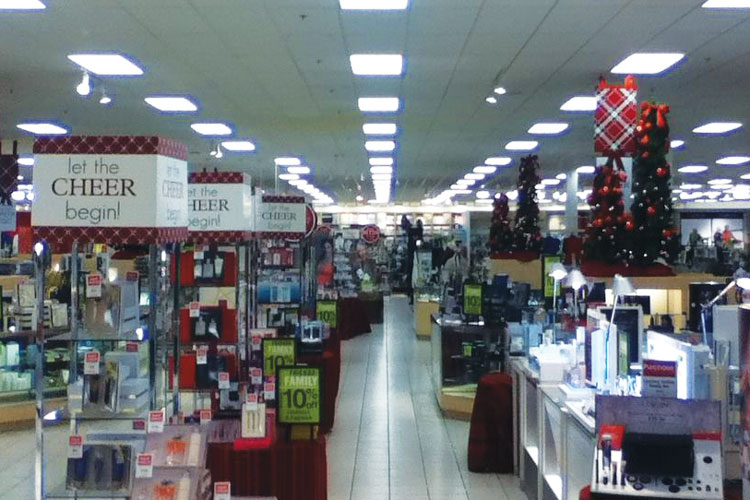 Once the diehard shopper has finished their Thanksgiving dinner, the next thing on their mind may in fact be holiday shopping. Black Friday has become a commercial craze for people scrambling to get deals now as early as midnight the day after turkey day.

That wave continues throughout the month of December to Christmas. It can be a rocky time for both sales associates at retail stores in the holiday season.

“Working in retail can be kind of hectic, around the holidays at least,” said Kyle Hanson, a music major.

Hanson has been working in sporting goods ever since starting at Caps, Hats and More in Wausau as a junior in high school. He has experienced Black Friday and holiday shopping ever since.

“Last year, we didn’t do very well because all the big stores like Sears, Walmart, Best Buy, started opening up at midnight. We opened up at five like we normally do, but our business went down just on that day just for the specific fact that we opened so much later because people were home napping,” he said.

As they work though the chaos that is the holiday season, they encounter more and more people looking for that special deal that can potentially help them get a gift for a loved one or a friend.

“Oh, it’s ridiculous how many customers come in — it’s like they don’t do any other shopping throughout the rest of the year,” Hanson said. “I mean the deals are better, but just from working there, the deals aren’t so much better during this point of the year than other times. If people would pay attention to ads throughout the entire year, they would see a lot of our ads and our sales in the holiday season are not that much better throughout the entire year. It’s just when people want to go spend
the money.”

As these students who are sales associates accumulate experience in the retail world, they pick up some different shopping habits during the holiday season. Jenna Lee a freshmen biochemistry major, a sales associate who works at Younkers, has been working for Younkers’ parent company Bon Ton since starting work at Herberger’s in Stillwater, Minn. in 2011.

“Yes. Coupons are amazing. I never paid attention to coupons before I worked there. Now I can do coupon math in my head,” Lee said. “I never went there before I worked there, but now I actually buy stuff there because I realized it’s ridiculously cheap. I get newspapers now so I can get coupons. Before I just went to Walmart because I assumed that was cheaper.”

Sarah Weinmann, a junior creative writing major, has been working at Kohl’s in Eau Claire since June. For her, working has helped chang her shopping strategy.

“Normally, I’m the one who shops for Christmas at the last minute. But, this year, now that I’ve seen different things, I already picked out a present for my mom and I’ve started putting together a present for my roommate and I’ve seen other things that I want to get for other people for Secret Santa gifts and other things,” Weinmann said. “I’m just more aware of what’s out there because I’m actually in the store compared to when I’m just sitting home.”
1. Know When to Shop

“Be smart about when you shop. Don’t shop on Saturdays, unless you shop on Saturday night which I doubt you’re doing,” Lee said. “Sunday during football games is a great time to shop. Weekday mornings, if you don’t have class.”

2. Don’t Just Spread Your Christmas Cheer, Spread Out Your Shopping

“Spread it out. Don’t tell yourself, ‘I’m getting all my Christmas gifts this trip to the mall,” Lee said. “You go there and you’re like, ‘I need to get something, so I’ll just get this. Then you wait and you see commercials and you’re just like, ‘wait, there’s an Old Navy in our mall? I could’ve gotten that for my mother but it’s too late. During the holidays, stuff tends to have a lot more flaws because people are just touching them and throwing it
everywhere.”

3. Plan Ahead and Adapt if necessary

“Don’t procrastinate and don’t spend a lot of time deciding what you are looking for. Decide what you are going to buy before you go out,” Weinmann said. “Be flexible on what you are going to get and don’t just spend a lot of money on people because that’s a really scary thought: you’re not paying rent anymore, you have to pay for other stuff. Just take your time, don’t panic and start throwing things together because that’s never fun.”

“If you’re looking for something specific, check the ads and check the special ads. There are some stores that run special ads on special days just to get more people in the store, but they bring the price down another 10 percent. So, instead of 20 percent off, it’s 30 percent off. So watch for those because even if it’s on an inconvenient day for you, that’ll save you that extra money,” Hanson said. “Look at the fine print too because you’re going to be upset if you bring in a coupon to buy something it isn’t going to work for and there is nothing the associate can do about it. Check the fine print and make sure it works for what you’re going to buy.”

5. Be in the Christmas Spirit and Keep Your Cool

“If you do come in with a situation that you didn’t read the coupon or whatever, you’re upset about it and you start being mean to whoever is checking you out, they’re not going to really try to help. They’re going to say, ‘it specifically says right on the coupon, I can show you right where it is that it doesn’t work on this item,” Hanson said. “If you’re nice about it and you say, ‘oh darn. I just thought I had it and I can’t buy it now because I don’t have that money, it was coming down to the range of this coupon and use your people skills, they can work on things and get you a little bit more of a discount that can get in
your range.”