With a clean sweep in doubles play, Blugolds were victorious in all singles matches for a 9-0 win. 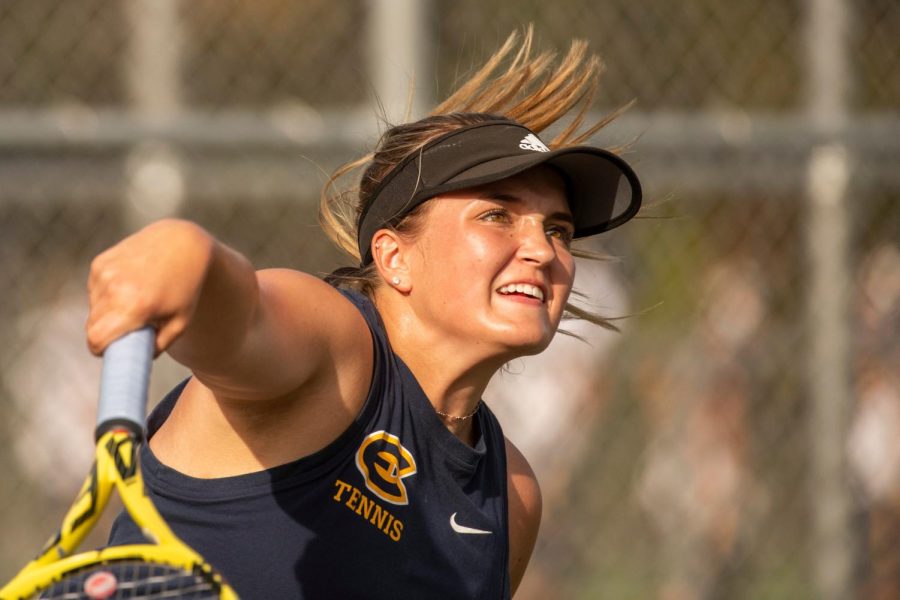 Sitting at the No.1 one doubles and singles spot is third-year finance student Claire Palen, who finished her day 2-0.

Alongside Palen is second-year nursing student Samantha Fuchs, also playing doubles at the No.1 spot and finishing with a 6-0 singles victory to UW-Stout’s Ellie Becker.

Their first win of the 2022-23 season was earned this past Saturday in a WIAC duel with UW-Stevens Point. The team walked away with a 7-2 victory.

The team walked away with a 7-2 victory, which was Ken Cychosz’s first victory as blugold head coach.

Formerly a University of Saint Thomas tennis coach, Cychosz was able to garner 14 straight victories for the women’s team, and also earn his place in the Blugold Hall of Fame for his work from 1979-82 in the UW-Eau Claire athletics department.

“They’re such a great group of girls, and they have such passion for the sport,” Cychosz said. I know that they’re playing well if they’re having fun.”

Sophie Geske, a second-year business administration and journalism student who played both doubles and singles for the women’s team, described the first season win. Geske played four doubles and eight singles that day.

“The overall atmosphere was great and super supportive, especially because it was at home and families as well as some of the men’s team came to watch,” Geske said.

Geske noted that the team is looking forward to “new insights, new opportunities and the chance to have a fun season with Cychosz as head coach for the 2022-23 year.”

Geske said, “UW-Eau Claire stood out because of the campus community and the friends that she’s made during her time here, which were enhanced from the team perspective.”

One thing that coach Cychosz wants to see in his current players is “confidence on the courts.”

This was something that he wanted to transfer from his coaching days at St. Thomas onto the Eau Claire women’s team.

“I want to see my team succeed and be confident, but without confidence we can’t succeed as a team,” Cychosz said.

Both Cychosz and Geske said that they have a “strong and smart team of girls this season and expect great matches up until the season’s end in April.”

These blugolds continued their WIAC play this past Sunday, Sept. 18 at UW-River Falls, with the first matches scheduled for 11 a.m.

“I’m really looking forward to the ITA (Intercollegiate Tennis Association) tournaments to begin,” Geske said of the season, “We all get to play individually and get in some great matches, all while having families and teammates support us from the sidelines.”

ITA tournaments begin on Friday, Sept. 23 through the 26. These are hosted by Gustavus Adolphus College in Saint Peter, Minnesota.

Smith can be reached at [email protected].