The Blugolds score their 7th consecutive win this season 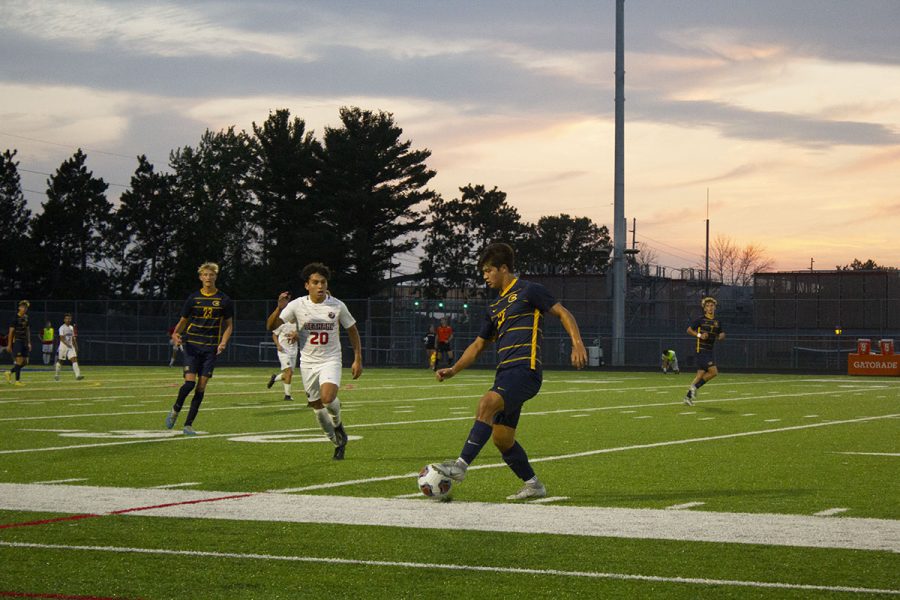 The UW-Eau Claire men’s soccer team has been pulling out the wins in every game this season, and it brought its tally to 7-0 after its win against the Bethany Lutheran Vikings in Sept. 15’s home game.

The Bethany Lutheran Vikings also entered this game undefeated, so this game had high stakes for both teams. In the end, the Blugolds came out on top at the end of the game.

In the first half of the game, third-year finance student Sam Lynch scored the first goal, putting the Blugolds in the lead. The game stayed 1-0 for the rest of the first half and the majority of the second half.

Second-year biology student Nathan Donovan scored another goal towards the end of the second half, making the game 2-0, putting the Blugolds even further ahead.

The Vikings were able to pull off one goal before the end of the game, but the Vikings’ efforts weren’t enough to beat the Blugolds and the game ended with a 2-1 win for UW-Eau Claire.

Max Walters, a third-year biology student, spoke of his teammates and how their cohesiveness is what brings them success.

“I think as a group we have a lot of depth and we’re really tight as a team,” Walters said, “That helps us each and every game and it keeps us going to our goal of winning as many games as possible and hopefully going to the tournament (NCAA Division III Men’s Soccer Tournament).”

Walters also revealed some of the team’s secrets as to how they’ve become such a bonded –– but also strong –– group.

“We do a lot of poker nights, we do a lot of team activities, we are constantly in the training room together joking around,” Walters said.

Even with their occasional poker nights or joking around in the training room, Walters said they always take their sport seriously.

“Every single practice, we come out here, we play hard,” Walters said. “I think it just creates a very good environment where we all compete and we all come to our games doing our best, and I think that’s what makes this team pretty special.”

Casey Holm, head coach of the men’s soccer team, views all of his players highly and believes every player deserves the success they have been achieving.

Both Walters and Holm said the team has already started thinking about their next game, where they hope to keep utilizing their teamwork and skills to bring home another win.

“Come out and support us,” Walters said. “We want to thank all of our fans. They do great, and they really help us bring energy and win games, so we couldn’t do it without them.”

Schad can be reached at [email protected]