Women’s volleyball team is on a winning streak after winning all three matches this weekend. 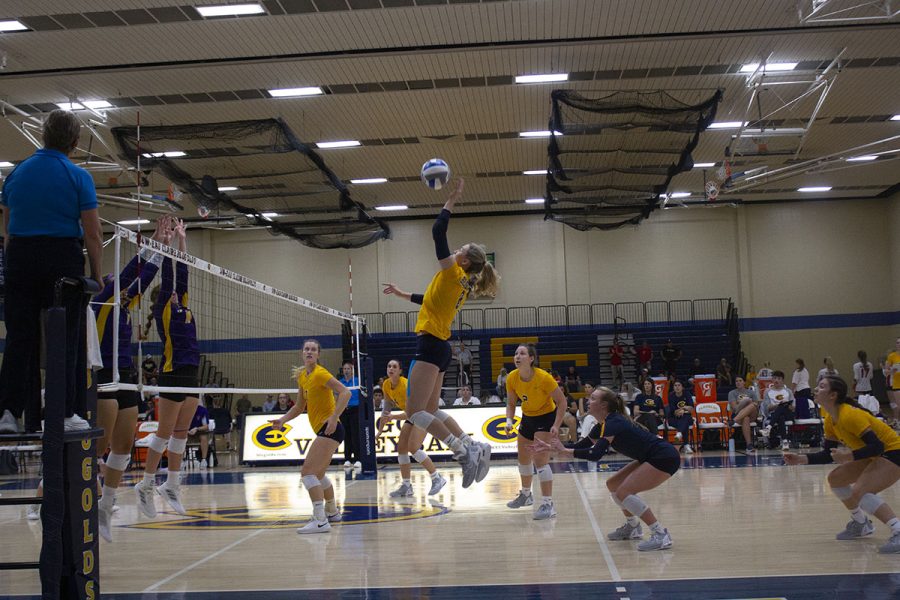 The Blugold's record moves to 13-4 after splitting the games 1-1 at Cornell tournament.

UW-Eau Claire women’s volleyball won all three of their games this weekend during the Sandy Schumacher Memorial Tournament.

During Friday’s match against St. Benedict, the Blugolds started off strong with a 2-0 lead, winning the first set 25-14 and the second 25-18. The team went all in during the first set, racking up nine of the 14 total kills in the match.

According to head coach Kim Wudi, the pressure was on when St. Bens came back to win the third and fourth sets, tying the game.

The reigning national champions finished in the fifth round, winning with a score of 15-12, according to blugolds.com. The final game score was 3-2, bringing home another win for the women’s volleyball team.

Arianna Barret, fourth-year communication sciences and disorders student, led the team in kills, bringing in 17 of 66.

“This was a gritty win. The crazy thing is that St. Bens did the same thing on Wednesday and came back and won that fifth set,” Wudi said. “I’m really proud of the way we came back in that fifth set and focused on playing clean on our side.”

“The best team we’re ever going to play is in our gym. Even when we’re struggling, we have each other’s backs.” said UW-Eau Claire senior middle blocker and Biology student, Maren Sanders.

This year’s team plans on taking home the title of national champions once again by taking things one match at a time, according to Wudi. They are working with a whole new team and starting from scratch.

“We’ve got a lot of volleyball to play before the next championship. The things we are doing are in pursuit of a national win, but that’s the end goal. We have a lot of process goals along the way” Wudi said.

Wudi continued, saying the team is working on crafting a new identity this year.

“We are all very confident that what happened last year doesn’t transfer over to this year.” said fourth-year exercise science major, Sheridan Dettmann who raked in 21 of the 66 digs during the match.

The team had two more games on Saturday to finish off the tournament. In the first game against Lakeland University, UW-Eau Claire won the match with a score of 3-0. The team pulled ahead of their competition in the first two sets. They finished off with a head-to-head last set, winning 25-22.

The last game of the tournament followed a similar trajectory to the first game of the day. The team won all three sets, making the number of wins this season 8-3.

They won the first set by a close margin of two points. The team attacked at full force to keep their lead and finished strong in the second and third sets.

The Blugolds return for a home game on Wednesday, September 21st to face River Falls. The match will begin at 7 p.m.

Allessi can be reached at [email protected].