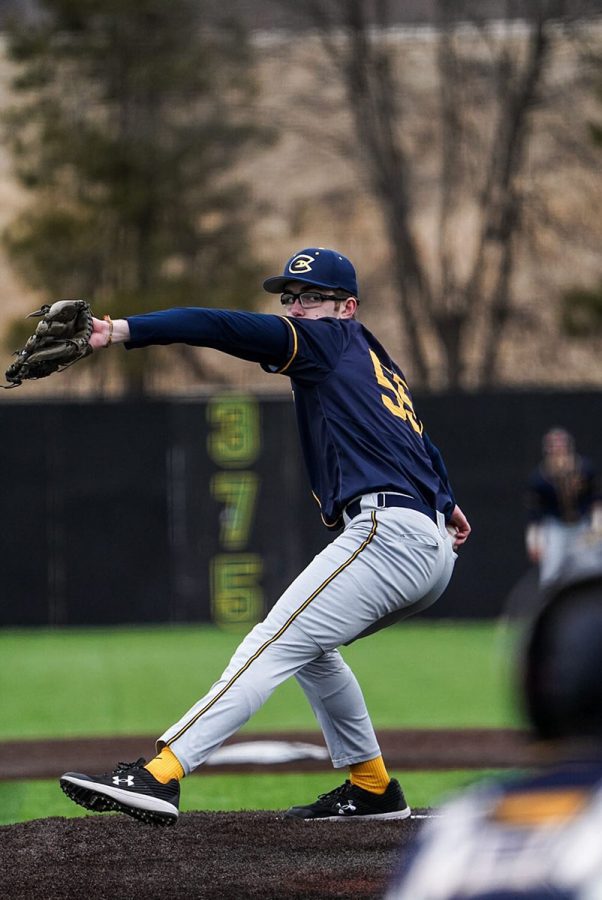 The Blugolds fell 3-6 in the first game of the doubleheader, but they bounced back in game two for the first complete game shutout in the new UW-Eau Claire baseball era. The final score of the second game was 3-0.

“I think we knew we were the better team. We were better than them, and we just kind of had to go out there, execute and have better at-bats, which we did in the second game,” Moore said.

Moore’s historic pitching included a total of 11 strikeouts and three walks. The Oshkosh Titans had a total of five hits among 35 batters in the nine innings that Moore pitched.

Moore said that his mechanics and mindset have helped him and his teammates grow in order to be able to pitch and compete at this level.

“Believing in yourself and just knowing that you are capable of going out there and competing and performing good at a high level, I think definitely that amount of preparation into this was what helped me go out there and perform at my highest level,” Moore said.

According to first-year marketing student-athlete Justin Coronado, going into the second game loose and knowing that they could compete as a team allowed them to perform.

Coronado said that it was a great game by Moore, and the hitters were able to take care of things.

Head coach Charles Bolden attributed the newly reinstated team’s growth and accomplishments to their hard work in practice and the team’s positive attitude to want to grow as a team.

“The biggest thing starting out early is to get them to understand the importance of how every rep in practice counts, how you can’t take anything for granted,” Bolden said.

“You can’t take any team for granted, and you really have to have an attitude every day where you want to get better.”

The team was reinstated in 2020, and its current roster consists of only four upper-classmen athletes.

Coach Bolden said that the biggest factor in securing the second-game win and ultimate shutout was execution. Simple fundamental changes like moving runners, getting bunts down and stealing bases in key situations are what secured the win for the Blugolds.

Contributing to the scoreboard, second-year athlete Chase Yeager was the first player to score a tally for the Blugolds in the sixth inning. Yaeger went two for three and ended up with one run batted in for the Blugolds.

The Blugolds held their momentum for the seventh and eighth innings, scoring another run in each. The Blugolds came on top at the conclusion of the second game, the final score being 3-0.

Bolden said that their goal as a team is to make the playoffs for the conference. In order to get there, the team is going to have to stay consistent, trust the process and continue to work hard.

Bolden added that the team appreciates as much support as they can get, especially when competing at home.

The Blugolds will face UW-Whitewater this weekend, competing at Bollinger field in Eau Claire. Their complete upcoming schedule can be found on the Blugold Athletics website.