Ice boats and the history of adapting sports to winter 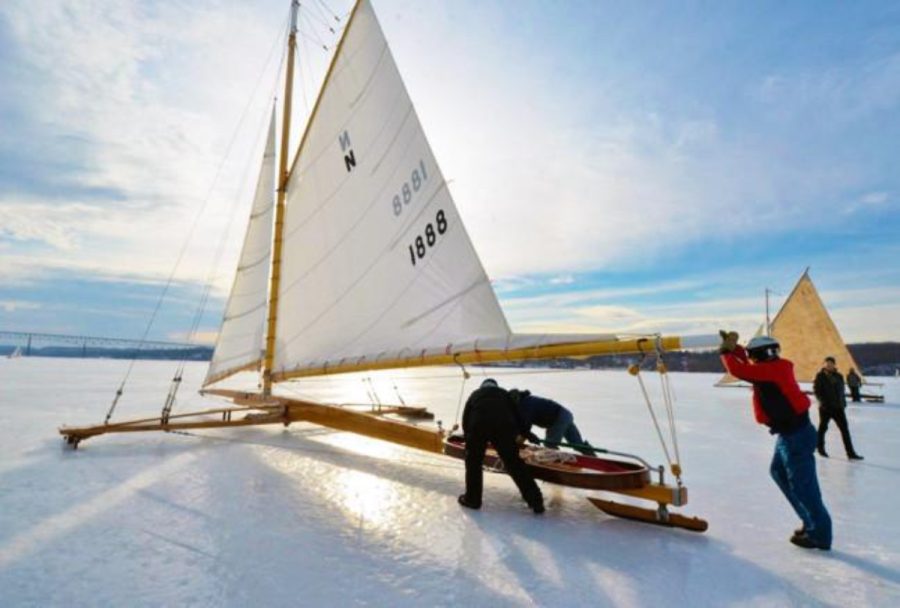 For Wisconsin and many other regions of the world, “winter” is actually a six-month affair stretching from late October through to May. Cold and gloom dominate the days, and the season seems to stretch on and on forever.

However, since the dawn of history, humans have found ways to take the bleakest days of this jumbo-sized season and inject a glimmer of fun into their lives.

So, with that in mind, if you found yourself this winter dreaming of sunny days out on the lake in your parents’ (or your friends’ parents’) boat, the International DN Ice Yacht Racing Association has a pitch for you.

According to the Encyclopedia Britannica, ice boating, or ice yachting, is a winter sport that uses modified sailboats to skate on the frozen surfaces of lakes.

Iceboating is just one example of human ingenuity in the face of winter’s efforts to prevent people from partaking in their favorite sports.

Ice climbing is exactly what it sounds like; an alternative to traditional rock climbing that takes advantage of frozen waterfalls in the winter. Climbers use tools like razor-sharp crampons and ice picks to scale walls of ice.

Hockey was developed as a cold-season alternative to traditional stick-and-ball games in the British Isles, before being adopted by Canada and evolving into the sport we know today.

The list goes on. Snowboarding originated largely from a combination of sledding and skateboarding (which, in and of itself, originated as a dryland variation of surfing).

Iceboating is arguably the most visually interesting, though, and most viscerally engaging.

The strange sport has a long history in the United States, especially among the monetary elite in New England.

In fact, the largest and fastest ice yacht in history was actually owned by John E. Roosevelt. If the last name doesn’t immediately ring a bell, this ice yacht captain was the uncle of President Franklin D. Roosevelt.

Today, the sport has spread across the country, and particularly in the Midwest. The sport has also evolved to include a variety of subcategories under its umbrella.

Some ice sailors prefer to forego the “yacht” and instead simply strap on a pair of ice skates and hold up their own, individual sail.

However, the original premise of ice yachting remains popular. Companies produce high-performance ice yachts that can hit speeds of up to 65 miles per hour, and clubs continue to grow across the country.

As always, there is a philosophical takeaway from all this, even if it’s nothing too revelatory or extraordinary.

At its core, ice sailing and other winter-adapted sports reflect an inherently human drive to always have fun. In any circumstance, even when the weather spends half a year doing nothing but trying to kill you, there are ways to enjoy the moment.

Hopefully, the weather will continue to improve and in the next few weeks, we’ll be able to return to jumping in lakes and playing warm, dry sports outside again.

Until then, though, test out your ingenuity and see if you can invent a new sport that takes advantage of your circumstances. You never know — people might still be playing it in a hundred years.Porisch can be reached at [email protected].