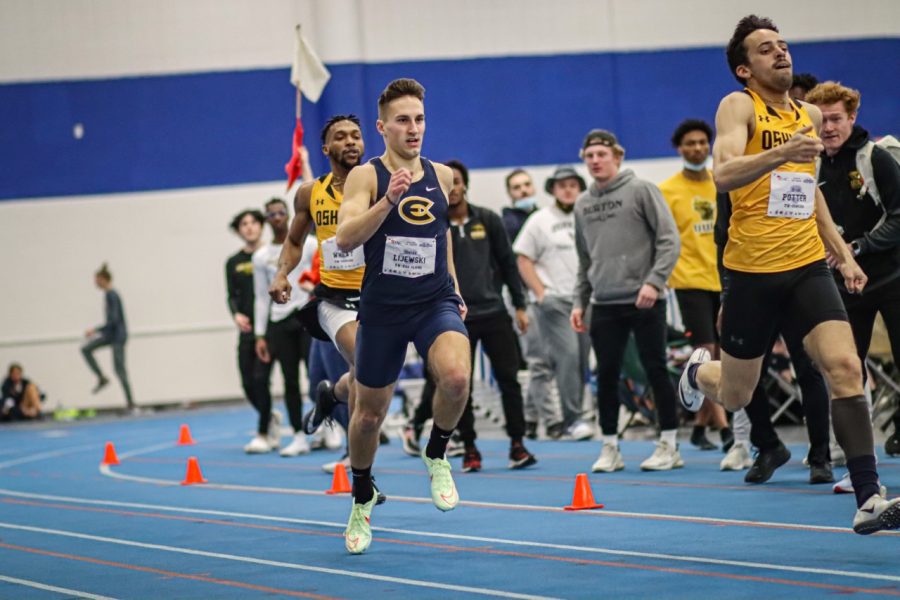 The WIAC indoor track and field championships were held at UW-Platteville this past weekend, one of the final competitions of the indoor track season.

Jordan Lijewski, a fifth-year accounting and finance student, not only finished as a conference champion in the 4×400-meter, but also placed second in the open 400-meter and was named the Max Sparger Scholar-Athlete.

Lijewski said that his and the entire team’s success was due to their teamwork and encouragement throughout their preseason and indoor competitions.

“The team worked together great all season. At the very start of the preseason, we’ve always had this very special chemistry between our whole team,” Lijewski said.

Noah Reedy, a fourth-year pole vaulter, also finished as a WIAC conference champion in pole vault with a vault of 4.89 meters. This put him at an 11th place ranking in the DIII competition.

On the Women’s side of competition, Caroyln Shult, a second-year student, achieved a WIAC conference champion place in the 3000-meter with a finishing time of 10 minutes and 6.85 seconds. Shult led the way for the Women’s team as their only WIAC champion, followed by many other contributing athletes.

Among these athletes is Catie Fobbe, a fourth-year criminal justice and political science student. Fobbe throws shot put and participates in the weight throw during indoor track and field.

Earlier in the season, Blugolds competed at the Stout Quad in Menomonie. It was there that Fobbe achieved her lifetime personal record in shot put of 14.21 meters. This personal record ranked Fobbe fifth in the NCAA DIII shot put.

Fobbe said that it was this accomplishment that allowed her to go into the WIAC championships with such a good mindset, and be able to cheer on her teammates after she had finished competing.

“I didn’t do as well as I had liked, so my next step was to go and encourage my teammates and cheer them on and help them in any way that I could,” Fobbe said.

Both Lijewski and Fobbe said that it was this encouragement and teamwork that led both the Men’s and Women’s teams to the podiums this past weekend.

“As soon as someone was done competing, they changed and they were out cheering on all the other teammates,” Fobbe said, “ … everyone was encouraging everybody, everyone was fighting for every centimeter, every one hundredth of a second. We all put it out on the line this weekend.”

Lijewski also said that a lot of hard work went into the whole team’s accomplishments, and that all of their work in the off-season is finally paying off.

“We know that we still have a lot of work to do, but a lot of the work we did in September, October, November is slowly starting to pay off,” Lijewski said, “…It’s just a great weekend to be a Blugold, that’s for sure.”

Both the men’s and women’s teams will compete at the NCAA indoor championships on March 11 and 12. Their full indoor and outdoor schedules are posted to Blugold Athletics, along with results as the athletes compete.