Athletes were recognized for Newcomer of the Year, All-WIAC team, Honorable Mention, and more 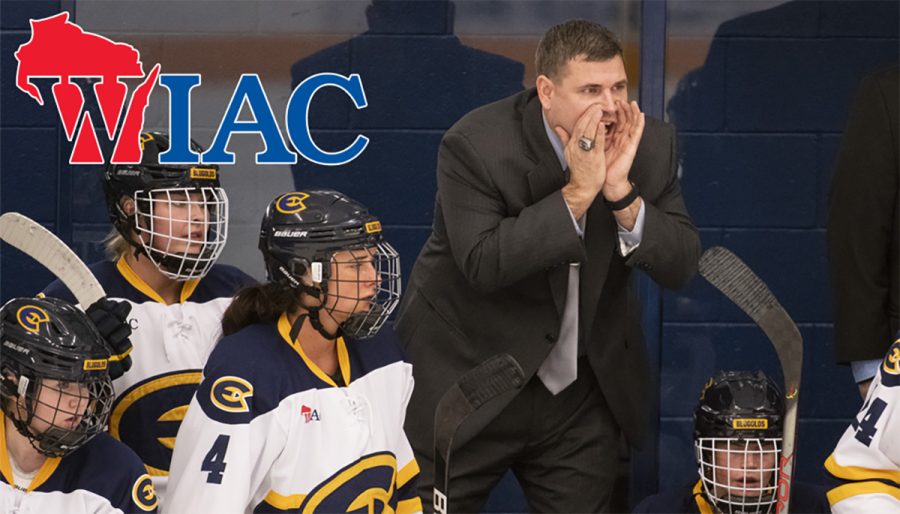 Both the men’s and women’s hockey teams finished their Wisconsin Intercollegiate Athlete Conference competition with several All-WIAC Team recognitions and various other awards for both coaches and players.

Men’s hockey goalie Ryan Ouellette was awarded Newcomer of the Year. As a first-year athlete in the 2022 season, Ouellette led the WIAC with a 1.66 goals-against-average and a .923 save percentage, according to Blugold Athletics.

Ty Readman, a fourth-year athlete on the men’s team, earned a spot on the WIAC-All Team. Also on the men’s team is Charles Weiand, who was awarded with the Honorable Mention distinction. Connor Koviak was recognized on the All-Sportsmanship Team.

The men’s team finished their season with an 18-11-1 record. Their season came to an end after defeating UW-Stevens Point in the WIAC Championships, earning their fourth Commissioner’s Cup and wrapping their season up on a seven game winning-streak.

On the women’s side, the WIAC recognized Head Coach Erik Strand as Coach of the Year for the third-straight season. Strand led the lady Blugolds to a 23-5 record in their regular season and coached them to the NCAA tournament once again.

According to Strand, his success as a coach wouldn’t be possible without the help of the amazing assistant coaches, athletic department, and of course the athletes.

“This award is quite frankly a great reflection of who we are surrounded with more so than an individual effort,” Strand said.

Along with Strand, Blugolds Hallie Sheridan, Danielle Slominski and Bree Osborne were all awarded spots on the WIAC-All Team.

Coach Strand said that these individual successes can be attributed to the entire team’s hard work.

“For me, I’m just a proud coach. It’s not easy, looking at our conference and how tough it is to play in, so to have a few of our players singled out is just a reflection of how hard everybody is working,” Strand said. “Any kind of recognition is amazing and I couldn’t be prouder.”

Bree Osborne, a fifth-year criminal justice and Spanish student, has been awarded first team honors for the second-straight year. She said that her success is due to both her coaches and team.

“I think personal awards are really cool, but I wouldn’t have this personal award for the past two years if it weren’t for everyone around me,” Osborne said.

Osborne ended the season with +14 for the team and is tied for second on the team with 11 assists.

The women’s hockey season came to a close after Strand led the team to the NCAA tournament, where the Blugolds fell to Gustavus Adolphus College.

Despite this loss, the Blugolds came out with a season record of 23-6-0. The new record of 23 victories is an all-time program high for the team.

The 2021-22 team has five departing seniors, but the majority of their team consists of returning players.

Strand said that this group was left with somewhat of an unsatisfying feeling, and he hopes that the returning players have a fuel on their fire throughout the off-season to return even stronger than they were this year.

“We always want to try to walk in an area where no other Blugold has before, and this group of seniors specifically, they’re walking out of here with the most wins as a group that we’ve ever had,” Strand said.

Osborne also said that although the season didn’t end how she and her teammates had hoped, she is really proud of what the whole team accomplished this year.

The full women’s ice hockey season statistics can be found at Blugold Athletics.  Schoenemann can be reached at [email protected].