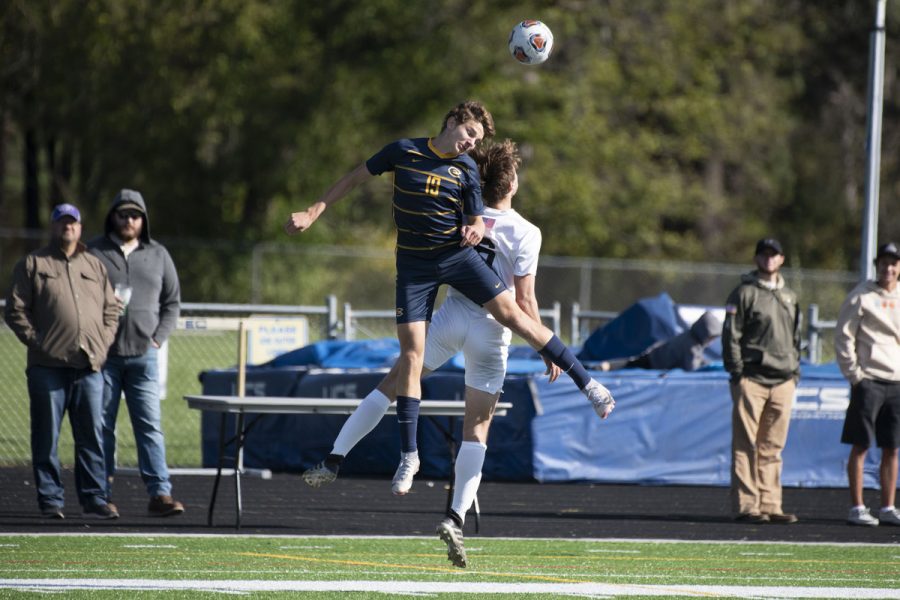 Brian Chapman, assistant coach, said he was proud of how well the team adjusted defensively after being forced to play one-man short for most of the game.

The UW-Eau Claire men’s soccer team was able to overcome playing shorthanded for the majority of the game to get a road win against St. Mary’s, sneaking out a 1-0 victory.

The Blugolds traveled to Ochrymowycz Field in Winona, Minnesota to take on St. Mary’s for their second to last matchup of the season.

UW-Eau Claire played 86 minutes of the match with only 10 players after Hayden Boich, a first-year midfielder, was assessed a red card in the fourth minute.

Brian Chapman, an assistant coach for UW-Eau Claire, said Heinen “put in all the work” for the goal and Donovan was in the right place at the right time which allowed him to score.

Chapman said Donovan needed to play a different role than usual in this game — playing out wide instead of centrally due to UW-Eau Claire being shorthanded. He said Donovan had several other excellent shot attempts in the game that were saved.

Donovan finished the game with six shots on goal which led the team.

Spencer Banks, a first-year goalie for UW-Eau Claire, only recorded one save in the game as St. Mary’s only managed one shot on goal out of eight total shots.

Casey Holm, UW-Eau Claire’s head coach, said Banks is a talented shot-stopper and has done a great job of taking on a leadership role on the field this season.

UW-Eau Claire formed a defensive strategy of “two blocks of four” that forced St. Mary’s to cross over defenders which allowed the Blugolds to force a lot of turnovers and made it difficult for St. Mary’s to get off shots, Holm said.

Chapman said he was proud of how well the team adjusted defensively after being forced to play one-man short for most of the game.

“The fact that they were able to get the job done while being a player short really showed a lot of character,” Chapman said.

UW-Eau Claire plays their final game on the schedule on Saturday, Nov. 6 on the road against UW-Platteville. The game is at 1 p.m. at Ralph E. Davis Pioneer Stadium in Platteville, Wisconsin.

The Blugolds are taking this week to solidify a game plan for the matchup which will be a “defensive battle,” Chapman said.

As the debut season for the new men’s soccer program nears its conclusion, Chapman said despite being a young, inexperienced team, their players approach the games freely and bounce back quickly as a group.

“They go out there and kind of just play,” Chapman said.

Holm said he is optimistic about what the team is building for the future, as getting a year older will help his young players gain experience.

They have the advantage of the majority of the team being freshmen who have three more years to build on after year one, and adding another recruiting class this offseason will help the team to build depth, Holm said.

“We will hopefully get better and better and reach our goal which would be to be one of the best teams in the nation.”