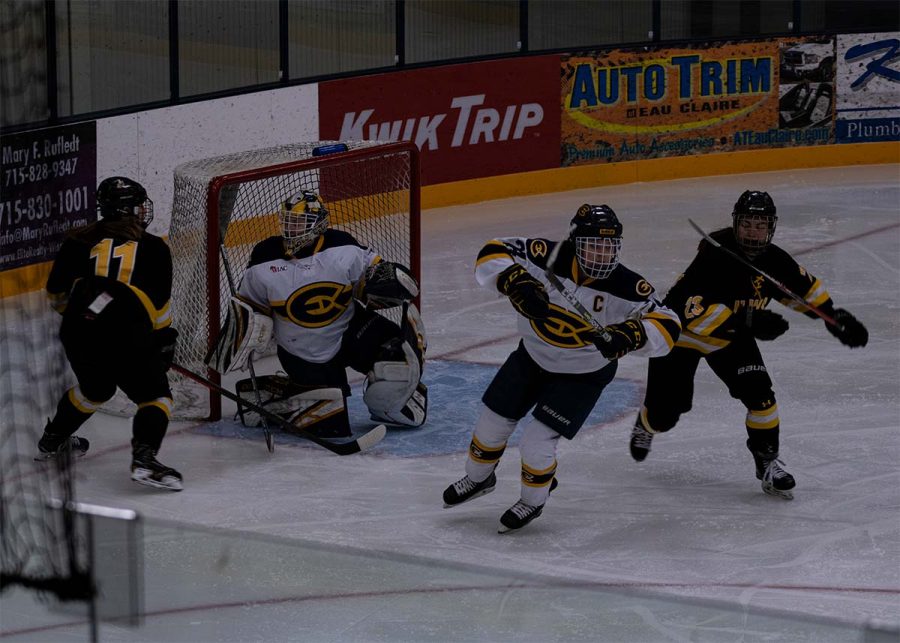 The women’s hockey team remains undefeated after its win against UW-Superior on Saturday.

UW-Eau Claire had its first of two home matchups last week at Hobbs Ice Center on Thursday, Nov. 11, winning 10-0 over Northland College. On Saturday, Nov. 13 they took on UW-Superior and won 3-0.

Head Coach Erik Strand said UW-Eau Claire excelled at pushing the pace of play and being specific with shot selection which allowed them to get the 10-0 victory against Northland College.

“I think they followed our game plan pretty much from the beginning,” Strand said.

He said defensively they were able to disrupt Northland’s passing lanes and interrupt what Northland tried to do on offense.

“All different phases that we want to have success with they executed on,” Strand said.

Hallie Sheridan, a third-year forward who scored one goal and three assists in this game, said the team’s chemistry and concepts they have worked on in practice allowed them to score ten goals in this game.

“In the offensive zone we took advantage of the space and time that we had to make plays,” Sheridan said.

Hanna Zavoral, a fourth-year forward who scored two goals on Thursday, said it was a confidence booster for the team to get a lot of different players scoring in this game, especially early in the season.

Zavoral said their team’s ability to spread the puck around and not be limited to a few scorers is a key to their success on offense in this game.

“We really play to each individual’s strengths, and putting that together and working our systems around that really helps us become a better team as a whole, rather than individual,” Zavoral said.

UW-Eau Claire secured their second Wisconsin Intercollegiate Athletic Conference win of the season against UW-Superior on Saturday, winning 3-1 on a hat trick from Zavoral.

Zavoral picked up her first goal of the game midway through the first period on the powerplay. Peterson and Bree Osborne, a fourth-year defenseman, were credited with assists.

The Blugolds gave up one goal to UW-Superior near the end of the second period but held on to win 3-1.

Strand said Zavoral has the ability to “take the game over” and has a great chance to be on the score sheet every game.

He said Zavoral went to the net with intent and purpose in this game vs. UW-Superior.

“She’s typically a player that once she starts getting momentum, the sky’s the limit for her,” Strand said.

Zavoral said the team’s solid play on offense as a whole allowed her to score the hat trick.

“Any one of my teammates could have been on the scoreboard too, it was just more about some of the opportunities I got,” she said.

Zavoral said being able to capitalize on the opportunities when handed them is how a game like this can happen, along with getting in a rhythm.

“After scoring one, you just get that confidence and you just feel in control of the ice,” Zavoral said.

The game will be a rematch of last year’s WIAC O’Brien Cup finals. Strand said each program has seemed to pick up where they left off last year — both remain undefeated going into Saturday’s matchup.

Sheridan said the UW-River Falls matchup will be a good test for the team to play under pressure.

Strand said this promises to be a fast-paced and emotional game for both teams.

“At the end of the day we’ll both be parting ways knowing where our team is at this exact moment and what direction we need to go to make sure that at the end of the year we’re competing for that NCAA Tournament,” Strand said.